The identity of the so-called ‘Flower Painter’, who decorated a wide range of mid-century modern Italian ceramics with quirky, colourful and cool stick people, animals and other objects during the 1950s & 60s, has long been a mysterious enigma. 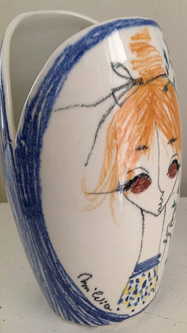 When building Graham Cooley’s ground-breaking ‘Alla Moda’ exhibition of 2012, and when I was compiling my book during the previous few years, nothing could be found about the identity of the artist behind these distinctive and characterful works. Over the years since then, a couple of collectors have guessed, and some have suggested leads based on other marks found on ceramics. 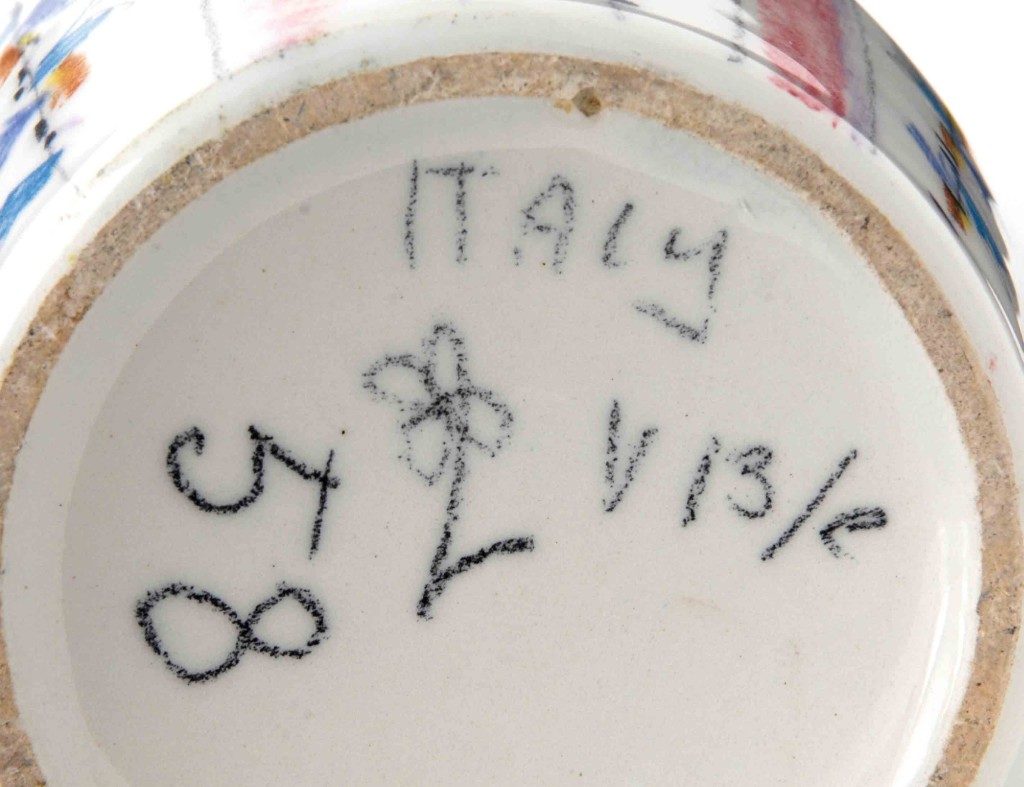 The lead that had the most potential led to a company called Il Quadrifoglio, based in Florence. You can learn more about that by clicking here and reading my blog post. The evidence found suggested that the mark wasn’t in fact a flower, but it was a four-leafed clover – which matches the Il Quadrifoglio (four leaves) company name. There were also two intriguing names connected with the designs – ‘Milvia’ and ‘Simmo’. 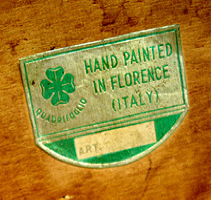 I was delighted and intrigued when a lady called Camilla Torna got in touch with me, having read my blog posts and Alla Moda book. She claimed that her mother was Milvia, the lady behind the designs. This was followed swiftly by an email from Dawn Clarkson of the Nice And Fancy blog, who has written about these designs. They spoke the truth and the designer’s true identity was revealed! Here’s the story…
Milvia was born in 1934 and studied ceramics at the Istituto d’Arte in Florence. She was also exposed to the history of art and was influenced by a book, given to her by a friend, called The Art of Living by Saul Steinberg. In 1955, Il Quadrifoglio was founded in an attic in Florence to produce ceramics and other homewares, with Milvia being their major designer until around 1958. Her colleague was called Simonetta, ‘Simmo’ for short. The photo below shows Milvia on the right, being interviewed in 1959.

Il Quadrifoglio’s products were sold exclusively in a shop called Botto in Via Strozzi, Florence. Judging by the quantity of ceramics spread around the world, Botto presumably also sold to other retailers and exported Il Quadrifoglio’s products, acting as distributor, although this hasn’t been confirmed. One of Milvia’s key designs was a stick lady, who featured on a series of tea towels called La Settimana di Milvia (Milvia’s Week) created for Zucchi in 1959. An example is shown below. It became a best-seller for decades and many Italian families owned (or still own) one. 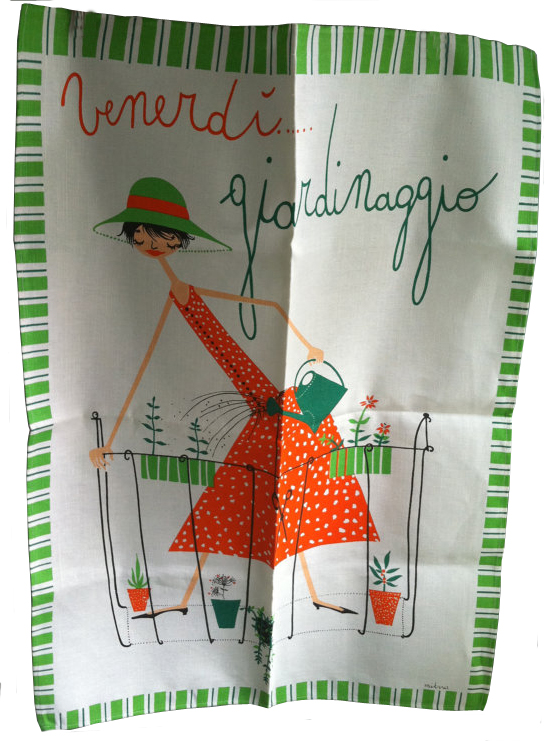 Milvia went on to design fabrics for Zucchi and Fiorio Foulards, both in Milan, Myricae in Rome, Cole in California, and the prestigious Liberty of London. Her working life took second place to her family during her 30s, but she continued designing after they had grown up, although she never repeated the fast pace of design that she built during her 20s.
Camilla has since founded a website to celebrate and promote her mother Milvia’s designs. As well as bringing her original designs back to prominence, she is planning to release over 40 period designs that have never been seen. You can visit the site and read more about Milvia at milvia.eu. 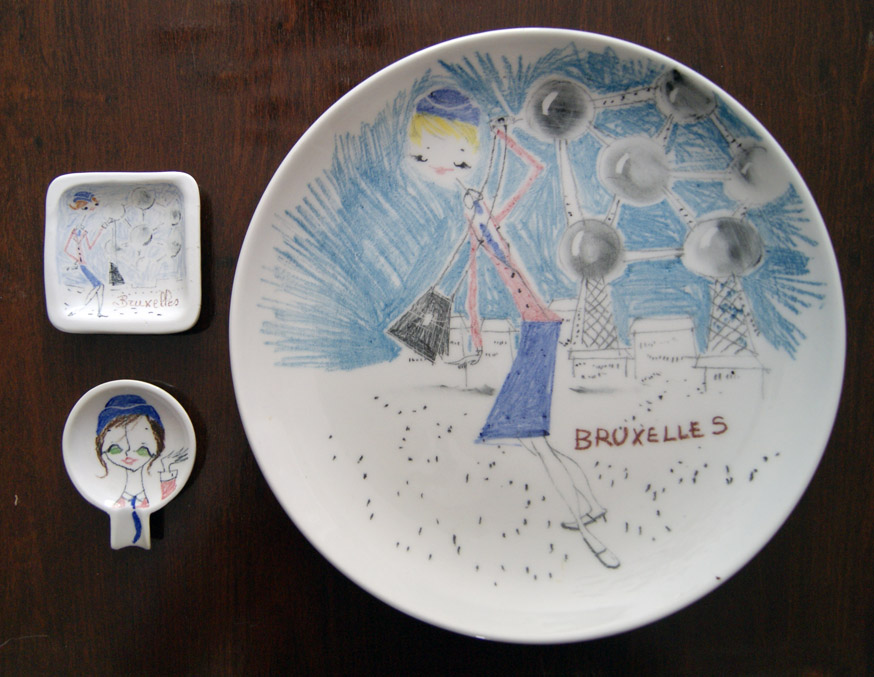 However, although Milvia created the designs, she wasn’t responsible for them all. Milvia herself very kindly looked at some of the pieces I featured in my Alla Moda book and on my blog over the years. She stated that although they were in her style, they were by another hand, so it’s clear that other designers were employed in later years to continue the style she devised. Good examples are the head below and the Brussels Expo souvenir ceramics (above) that I wrote about in the blog post you can read by clicking here. Milvia said that she did not produce these, and that they’re by another hand working in her general style.

So there we have it – the truth, right from the horse’s mouth. Although she didn’t produce all the designs, an Italian lady called Milvia created the unique characterful look so many of us love for a company called Il Quadrifoglio in the mid-1950s.
I’m sure the reintroduction of her work will be enormously successful, meaning her fab fifties and super sixties designs will continue to live on for decades to come.
Mystery solved through the power of the blog!

To buy a copy of my ground-breaking book, Alla Moda: Italian Ceramics of the 1950s-70s, featuring ceramics by Milvia and dozens of other designers and makers, please click here.

To visit Spoonflower and see and buy some of Milvia’s newly released fabric designs – click here.