As the nights grow chilly and draw in on us, there’s nothing more enjoyable than the cliché of curling up on a comfortable antique chair with a good book. Books about antiques and collecting that don’t focus on a particular subject area are rare, probably due to the potentially limited readership. Those that do get published invariably focus on a salacious scandal to sell copies, such as The Art of The Steal which covered Christie’s and Sotheby’s and their price-fixing agreement. So I was delighted when Gail McLeod of Antiques News & Fairs recommended the intriguingly and temptingly named Killer Stuff And Tons of Money as a holiday read to me.
Firstly, this is a hugely enjoyable and warm read that anyone who collects, buys and sells, or even just enjoys TV antiques programmes, should read. Secondly, it covers only one (but probably the largest) segment of the American market, but the core themes carry through to the market in any country, and arguably also to any segment of the market. 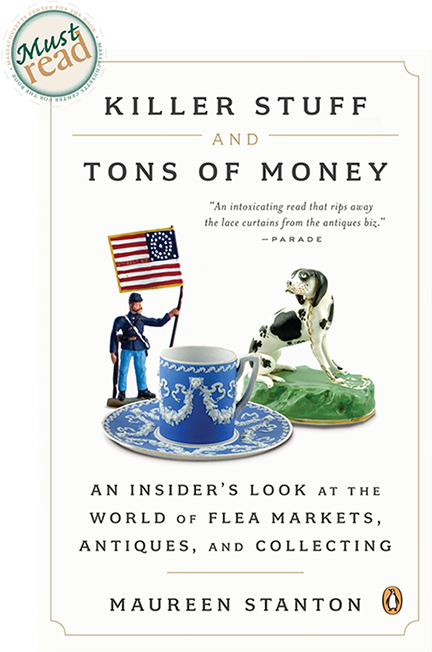 The book records the author’s experiences across a few years as she shadows an old college friend who is now an ‘upper middle’ range professional antiques dealer. She visits fairs and auctions with him and observes him buying and selling – and hopefully making a living. Curt Avery (not his real name) emerges as a very likeable, solid character, far away from the dishonest, money-grabbing, and slightly insalubrious dealers promoted by many daytime TV shows.
Their story also shows that becoming a dealer is not easy, and success requires expertise built up across many years of experience, and a lot of luck, in a crowded marketplace.
The current credit crunch and recession have generated a number of new dealers as people are forced to reconsider their careers and futures in light of being made redundant. This book shows that dealing in antiques is certainly not the easy option it may appear, even if you have experience of buying and selling through collecting. It requires intelligence and immense, in-depth knowledge not just about the products, which are almost endless, but about the current state of the market too. There’s a difference between being a dealer in secondhand goods, and a dealer in antiques.
Stanton’s book offers a realistic insight into the industry, showing how little money there is in most deals. Although she rightly doesn’t focus on it, I wondered how our modest hero Avery would have supported himself financially, let alone a family, without his wife’s steady income. There are no million dollar deals here, peppered with international flights, five star hotels, and champagne-soaked opening gala nights. Instead, there’s rain at Brimfield, unpacking and packing a van tightly, and erecting tents. But for those of us who love this industry, it’s thrilling stuff through and through. There’s also the warmth and camaraderie of the often eccentric and unique characters that make up the trade. And a good measure of master fakers, rediscovered treasures, sniping, bargains, and missed opportunities.
Stanton also touches on what it’s like to live with an antiques dealer, with its potential family problems caused by Avery’s almost constant life on the road, and the sheer amount of stuff that is built up and stored with good intention, but never delivers the promised profit. On that note, Avery’s passion constantly shines through, not just with his knowledge and obvious understanding, but with his pricing and keenness for an object to go to the right owner who loves it.
This excellent introduction to the world of antiques dealing also points out an often ignored key driver in the industry – fashion. Avery often fondly reminisces about certain objects that were once desirable and valuable, but have now fallen out of favour in a constantly changing market. But Stanton records the situation as it is, and stays away from the depressing gloom promoted by many old hands in the trade. Instead, she shows the life and vigour that the market still retains and will continue to retain – providing one adapts with the times. Thankfully, this isn’t a lament about the end of the business. Another (cleverly related) facet that adds enormously to the book is Stanton’s injection of unusual, and sometimes surprising, historical fact. These add richness and depth to the book, and to the context of the many stories and objects within. As such, the antiques are rightly portrayed as parts of history rather than as mere commodities.
Despite being an academic who has won many prestigious prizes and grants, Stanton writes with a swift pace and lightness, rather than an academic dryness or stodginess. I found it hard to put the book down, and read it much more quickly than I expected. Which was no bad thing – I enjoyed very page of it. And I’m sure you will too – go buy it. And fire up the kettle and draw up that chair!
Click here to find out more about Stanton and her book.
Click here to buy your copy on Amazon.