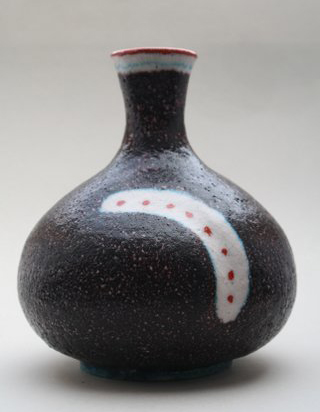 My friend and fellow mid-century pottery fan Emiel Monnink of Retrominded and I were chatting online last week. I had just met a friend of his at the excellent Ardingly antiques fair, and he had just found a piece of Italian pottery for me to look at. I found the story fascinating, and (almost) completely new to me.
He had acquired the vase from a friend as it bore the mark of De Bijenkorf, a chain of upscale department stores in the Netherlands, and a flagship store in Amsterdam. The name translates as ‘the beehive’, so the motif is one side of the outline of a beehive, inside a circle. The company was founded in 1870, and is known today for stocking great quality, finely made pieces by renowned brands. He had also acquired it because it looked very similar to works he had seen by the famous mid-century Italian potter and ceramic designer Guido Gambone (1909-69). They can fetch many hundreds, if not thousands, of pounds, but this example was not signed with Gambone’s surname in the usual way. 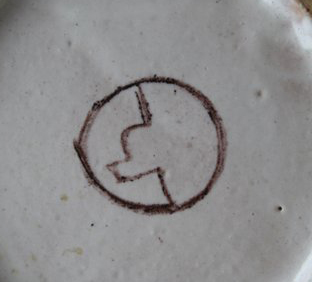 I agreed that the thick, almost glassy, glaze seemed completely right for Gambone, as did the colours used and the starkly modern, yet almost archaic, geometric pattern. In fact, I included pieces with similar glazes in Alla Moda, my new book on mid-century Italian pottery. If I had to attribute it without seeing the base, I’d have agreed with Emiel and said Guido Gambone too. 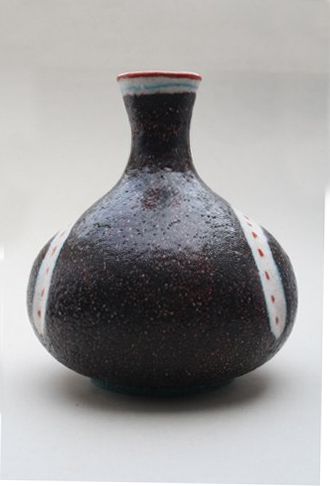 Emiel then told me that he had asked around and had found a ceramics expert who confirmed that Guido Gambone and Marcello Fantoni did indeed produce ceramics specially for De Bijenkorf during the 1960s. The company must have supplied the potteries with a stamp to use on their orders and asked them not to mark their work with their own name. My research for my book told me that this wasn’t unusual. For example, nearly all Bitossi pieces produced for distribution in the US by Raymor were not identified as Bitossi products, except for an ‘anonymous’ code on the Raymor paper label.
So the result of this is two-fold. I can now add De Bijenkorf to the list of retailers and distributors that Fantoni and Gambone produced pottery for, and Emiel can smile a little bit more because his investment of a few euros is now worth a few hundred euros…

Images with thanks to and copyright Emiel Monnink.

Update: Another piece made by Gambone’s pottery for de Bijenkorf has been identified by Emiel Monnink and Rob & Saskia of Artnentique.nl. Shown below, it’s an asymmetric, curving dish decorated with a handpainted stylised car motif and blue rim. Although it’s far from the usual abstract or primitive motifs used by Gambone, it is very typical of the 1950s. This example is unmarked, but the thick, bubbly glassy glaze is pure Gambone. 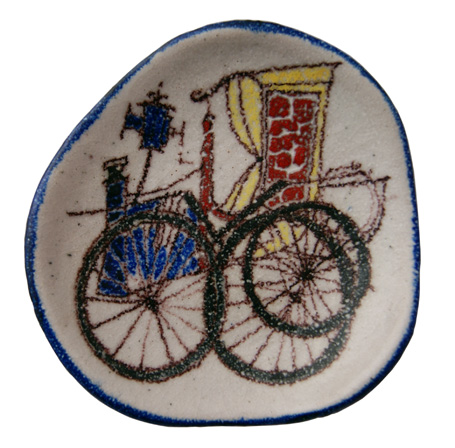 Photo copyright Mark Hill Publishing Ltd, and with many thanks to Emiel Monnink.