Last Saturday saw the launch of the first ever exhibition and book dedicated to Caithness Glass and the work of its co founder and first designer Domhnall ÓBroin.
Over 300 pieces of glass from the Cooley Collection were beautifully displayed at Broadfield House Glass Museum, covering fifty years of world-renowned design since the company was founded in 1961. The largest display cabinet was devoted to the work of ÓBroin, with later designers such as Colin Terris, Helen MacDonald, Alastair MacIntosh, Gordon Hendry, and others filling the rest. The brightly lit glass-walled corridor to the glassblowing studio was lined with sandblasted vases in a rainbow of colours.
The day kicked off with me giving an animated talk on my personal ‘Top Ten’ designs in 20th century glass. Lunch came next, and was followed with a typically intelligent and insightful lecture by Graham on his perspective on Caithness Glass.
Over 60 people then joined us as Graham and I gave a private tour of the the exhibition. A very special guest made the day the success it was – we were joined by Emer ÓBroin, Domhnall’s daughter, who had flown in with her family from St Louis, Missouri, for the occasion. Emer’s help has been invaluable, allowing us to understand her father’s enormous contribution to 20thC British glass design and to Caithness Glass from 1961-66. You can see the three of us, in front of a cabinet containing her father’s designs, above. 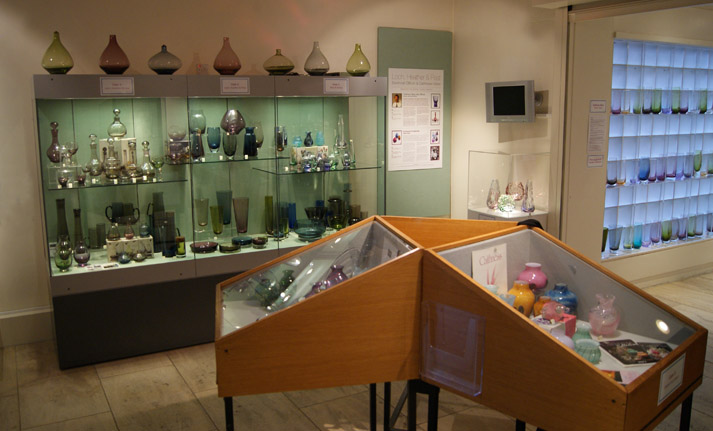 The exhibition is free to to enter, and runs at Broadfield House Glass Museum until 24th April. From there it moves to Perth, the  ‘home’ of Caithness Glass from the 1980s-2005, and can be seen at the Perth Museum & Art Gallery from 7th May until 1st October. Then it moves to the King’s Lynn Arts Centre from 12th November this year until 25th February 2012. Go see – it’s free!
Whether you can see the exhibition or not, why not learn more about this rapidly developing collecting area and buy my book? Click here to find out more!
With special thanks to Maurice & Pauline Wimpory of The Glass Association, Janet Hendry of The British Glass Foundation, and the Friends of Broadfield House.