The next day began with a gentle walk around historic Gastown, and down to the harbour. Watching seaplanes take off and land made us curious and, before we knew it, the banker and I had booked ourselves in for a 20 minute airborn tour of the city and nearby mountains with Harbour Air Seaplanes. I’m a great fan of tiny propeller driven planes as flying feels much more exciting, fast and ‘real’ to me than a lumbering 747. 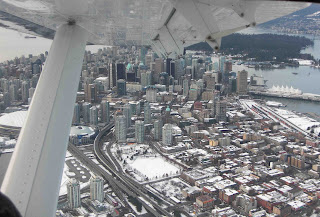 Taking off and landing were surprisingly smooth, and the views over the cityscape were nothing less than breathtaking. My breath was certainly taken away by the turbulence that shook the plane around as we soared past Grouse Mountain! If you get the chance, this trip is to be recommended to get a feel for the scope and size of the city and its proximity to the beautiful mountains and inlets that surround it. 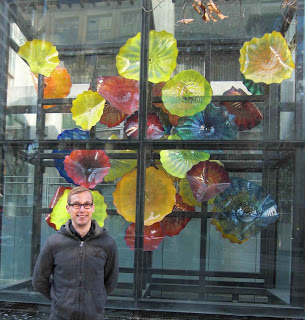 Now – onto the antiques and retro stuff! After passing a public display by Dale Chihuly, I found that Gastown has perhaps the best selection of shops offering the best quality and variety of items in the city. Nearly a dozen shops can be found by wandering around the side streets. Metropolitan Home, on 217 West Hastings St (near Cambie St), was my first port of call. The elegant and tasteful gallery, run by the very helpful and friendly Mary Watson, is known for its mid-century modern furniture by key Canadian designers, as well as by more globally recognised names such as Harry Bertoia and Arne Jacobsen. Look out for their accessories too, which range from vases to lamps. Next stop was Wow Interiors, at 350 W.Pender St, which offered similar stock, but with a strong ‘Pop’ vibe and feel. 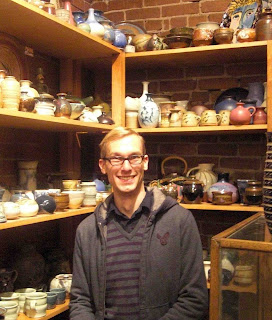 But the jewel in the crown, for me at least, was Doda Antiques on 434 Richards St. Run by ex-musician and locally-known personality John Lawrence, this was everything I hoped to find – and more. Rows of shelves and dozens of cabinets greet you as you enter, all crammed with 1950s-70s glass, ceramics, metalwares, lighting, and funky contemporary British Columbian tribal art. I eventually made my way to the back of the shop, where I found perhaps the largest display of Canadian art and studio pottery that I have ever seen.
I was particularly captivated by some finely potted vases by early B.C. potter and German emigré Otto Wichmann. Little is currently known about him, which is surprising given his superb feeling for form and his mastery of complex crystalline glazes. Ranging from around C$60 – C$150 (£35-85), I simply had to add an example to my collection. Given the high quality of the piece I chose, and its siblings around it, I feel it’s only a matter of time before more research is done and this potter takes his place in the collecting world. 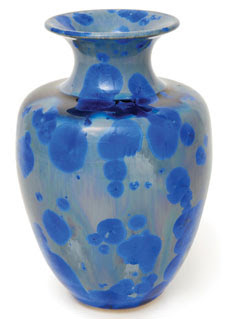 I spent a long and happy time chatting with the open and charming Mr Lawrence, who was kind enough to let me handle a great many pieces, most of which had come from his own vast collection. If you get the chance – you must go. With everything from Fat Lava to Bjorn Wiinblad to costume jewellery to Scandinavian, Murano and Czech glass on offer, this store is sure not to disappoint.
With a wide grin on my face, I walked back to our hotel to prepare for New Year’s Eve, taking a detour to gather my thoughts about the year that had now nearly passed in the idyllic Dr Sun Yat Sen classical Chinese garden in Chinatown. With Vancouver’s extensive coastline and fishing industry, sushi was the No.1 choice for dinner – tonight at Samurai on Davie St – washed down with a lovely crisp Chablis. Before I knew it, we were counting down the final seconds of 2008. Happy new year everyone!