My main reason for visiting the Czech Republic last week was to attend the opening of a major retrospective exhibition of the work of eminent Czech glass designer and maker Frantisek Vizner. I was kindly invited as the guest of the Ajeto Glassworks, whose smart and spacious museum in Novy Bor was the location of the exhibition.

Frantisek Vizner was born in 1936 and has risen to become a globally known name whose unique studio works can be found in key museums and public and private collections across the world. After mastering basic skills at the Specialized School of Novy Bor, he studied at the Prague Academy of Applied Arts under the legendary Professor Karel Stipl from 1956-62. He then moved into the government organised Czech glass industry, as a designer of mass-produced pressed glass. He produced over 20 designs until 1967 when he moved to the noted Skrdlovice glassworks to produce limited run hot-worked designs. In 1977, he left Skrdlovice to focus on the unique studio works that he had begun whilst there, and for which he is best known.
The exhibition was divided clearly into three different zones; pressed designs, hot-worked designs, and later cut and polished works from his own collection. They were surrounded by original design sketches and paintings by Vizner and his contemporaries, including Stanislav Libensky. Also included were his latest designs – a set of drinking glasses and a carafe complexly cut with an intricate diamond design. Cut by laser, rather than by hand and machine, the range will shortly be put into production by Bohemia Machine. All were displayed in a manner typical of postwar exhibitions of Czech glass – on simply constructed, low and wide tables in an open, spacious room painted in white and grey. Only one of each object was displayed and, although similar designs were displayed together, there was plenty of space between them allowing each item to be contemplated and appreciated in its own right. 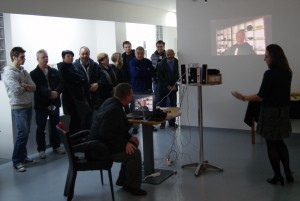 Mr Vizner himself was expected to attend the opening exhibition, and I was extremely excited about meeting him. Sadly, illness prevented him leaving his home in distant Zdar that evening and he was unable to see so much of his work so beautifully displayed together for the first time. However, my host and the exhibition co-organiser Jindrich Parik had a simple and highly effective solution – Mr Vizner would join us via Skype. Within minutes, I was watching Mr Vizner projected against a wall as he spoke to us from the comfort of his home. He was able to not only view his collected works, but also see the growing crowds of visitors from the town of Novy Bor and far beyond. One aspect Mr Vizner was particularly pleased by was the large number of young people who attended – although glass in the Czech Republic may be a historic and traditional industry, it is hardly a dusty, dead or defunct one.

The evening was officially opened by museum manager Daniela Prokesova, who welcomed us and introduced Czech glass researcher and author Antonin Langhamer. As expected, Langhamer spoke in an eloquent and expert manner about Vizner’s ground-breaking contribution to 20thC Czech, and global, glass design spanning over half a century. And then were free to enjoy the great master’s works for ourselves. I was also able to meet a number of Vizner’s peers, including Karel Wünsch and prolific Crystalex designer Marie Glückaufova. In all, a truly wonderful and unique evening made even more special by the fact that Mr Vizner himself was delighted.

If you’re interested in building a collection of Vizner’s works, it is still possible despite his name becoming a virtual byword for postwar Czech Glass. His late 20thC and contemporary cut and polished studio works tend only to be available from top galleries and auctions, and usually cost anything from £2,000 to over £20,000 depending on the design and whether it is unique or part of a limited edition. You can see a selection from the exhibition at the bottom of the page. More affordable are his designs for Skrdlovice, which can be found from eBay and specialist glass fairs for anything from £50-500.
The most affordable examples are his pressed glass works, which were largely mass-produced. Some appear to be scarcer than others – his iconic ‘eyebath’ jardiniere designed in 1962 (no.13162, above) is harder to find and will typically cost around £70-150 , whilst a tall ‘tetris’ vase (no.20082, shown above left) designed in 1965 is easier to find and will typically cost under £30. In all instances, I strongly recommend either buying a book on Vizner or doing your research before buying, as his fame and reputation often means that his name is applied to designs by others. I also feel strongly that his star is yet to rise further with collectors and design aficionados, meaning demand and prices will rise steeply over the coming years.
If you like it, buy now – you have been warned! 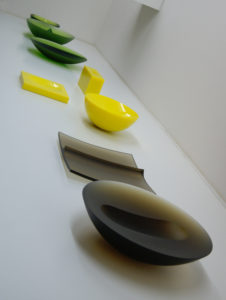 I can’t recommend a visit to this exhibition enough. Frantisek Vizner is one of the most important glass designers of the 20thC, and opportunities to view this much of his work in one place do not come along often. Especially those approved of by the great man himself. The exhibition runs at the Ajeto Glassworks in Novy Bor, Czech Republic, from 25th November 2010 until 5th March 2011. Click here to find out more, and to view more images of the exhibition, click here.
I would also like to thank Jindrich Parik, Daniela Prokesova, and Maxim Velcovsky sincerely for their help, support and kindness.