I didn’t have high hopes of finding much of interest in the first leg of our annual holiday, which took us to Mexico City. Of course, the banker saw this as a good thing – a break for me from work. Mexico doesn’t have a great reputation for antiques. Even though it has been wealthy, which can mean imports such as with Buenos Aires, apart from its rich pre-Columbian heritage, the country is better known antiques-wise for things that aren’t what they look like! 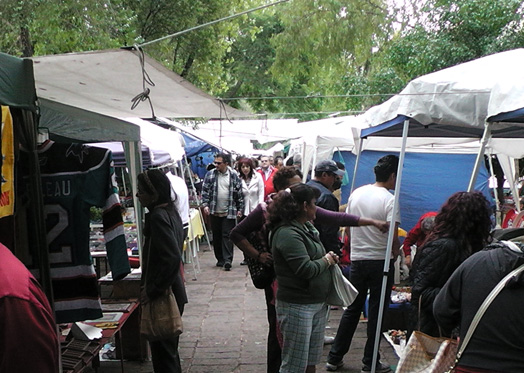 By the third day (Saturday) I couldn’t resist a little hunting any further, particularly as I discovered that a large flea market was being set up not three minutes walk from our hotel! My research showed that the market that runs along the middle of Avenue Alvaro Obregon in the Roma Norte district is one of the three key flea markets in the city. What luck! We had a leisurely morning, but even when we arrived at 10am, many stands were still setting up.
We started at the avenue’s junction with the Calle de Orizaba, which turned out to be pretty much the middle. Walking towards Insurgentes Sur, the stands sell a mixture of handmade crafts, things that look like them, and mainstream food and clothes. The closer you get to to Insurgentes, the more food and clothes you find. The street food stands tended to be packed with Mexicans and mountains of fresh produce, and the clothes stands tended to be filled with rather suspicious-looking Nike and Adidas trainers and Hollister and Abercrombie & Fitch clothes. So we turned around, and headed towards Avenue Cuauhtemoc. 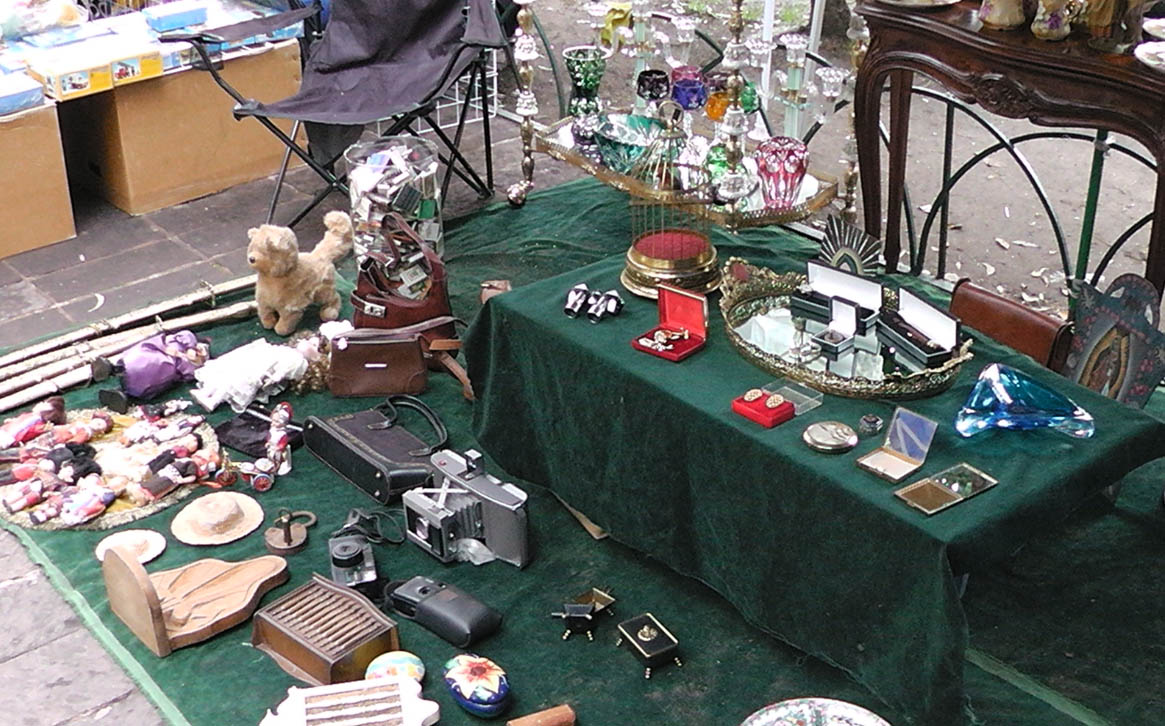 That was more like it! There are perhaps a hundred or so sellers along the stretch, selling all manner of things on tables and rugs. Most were under-cover as this was the rainy season! Quality tended to be pretty low, to be honest, and focused on cheap and cheerful homewares. A number of stands also sold what the Americans often call ‘character collectibles’, plastic action figures, models, and toys from film, TV, sci-fi, and cartoons. All were out of their boxes, with many looking more than a little play-worn. An unexpected, unholy alliance of Star Wars, Bugs Bunny, and The Beatles! Prices seemed incredibly cheap to me, not that I really wanted anything on offer. Murano-style, Mexican made glass tended to cost £5-20. And that was factoring in the Blond Tax (more on that later). 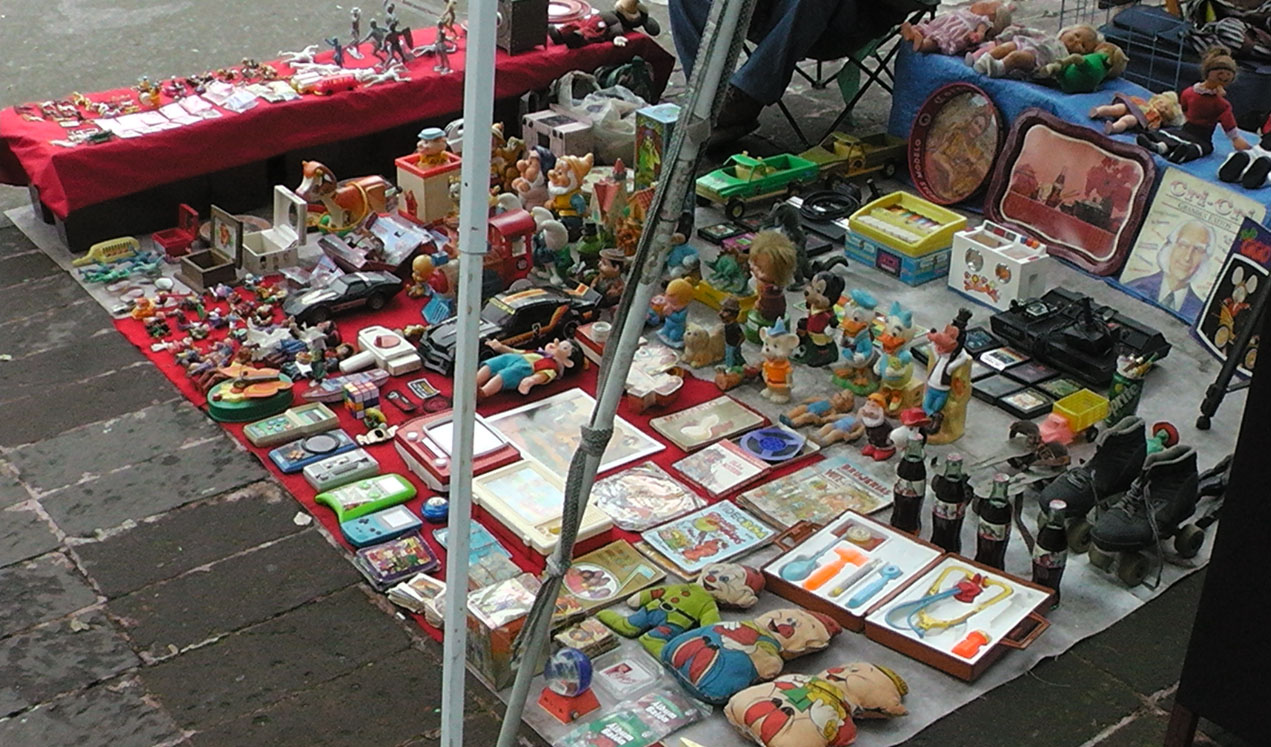 I also found a number of stands dedicated to selling cigarette lighters and pens, something that didn’t surprise me as I knew a number of South and Central American collectors when I worked at Bonhams. These were the exception to the rule, the prices quoted seemed about 10-20% higher than they should be – in other words, they were dead-on after negotiation. The suspicious looking clothing up the road had morphed into suspicious looking Mont Blanc accessories at this end of the street. No, let’s just say it – fake Mont Blanc accessories. The number of stands indicates not a small obsession with this brand, and vendors seem to sell every piece as “100% authentic“….
In all, it’s worth a visit if you have the time, and the market seemed a little larger on Sunday. If you’re after a lump of Aztec or Mayan style carved wood or stone as a souvenir, it seemed cheaper than many of the souvenir shops and offered something different, with a little age. 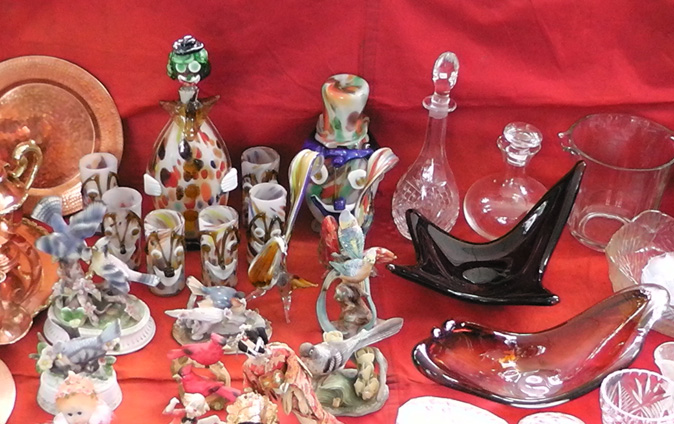 And, once sundown has arrived and the traders begin to pack up, I’d strongly recommend popping in to the trendy  Limantour cocktail bar for an evening sharpener. Supremely stylish, their skilled, honest, and friendly barmen (most of whom speak English) serve up some of the most delicious cocktails that have ever met my lips. Truly divine! As the evening draws on, and it will, I’d strongly recommend trying something made with Mezcal, allowing the warmth of its rich smokiness to curl around your head. In the end we entrusted ourselves entirely to our charming and knowledgeable barman Rodrigo, who shook us up many a new taste sensation. I say knowledgeable, as he knew about the city’s flea markets, and proudly showed me his 1950s cocktail shaker that he displayed in an alcove behind the bar. It seemed my list of four targets were right, but he said I should be aware of ‘Blond Tax’. At over 6 foot in height with bright blond hair, there is no way I could pose as Mexican, so I should be aware that I’ll have to pay more than a Mexican would – even if I spoke Spanish, or however hard I negotiated! 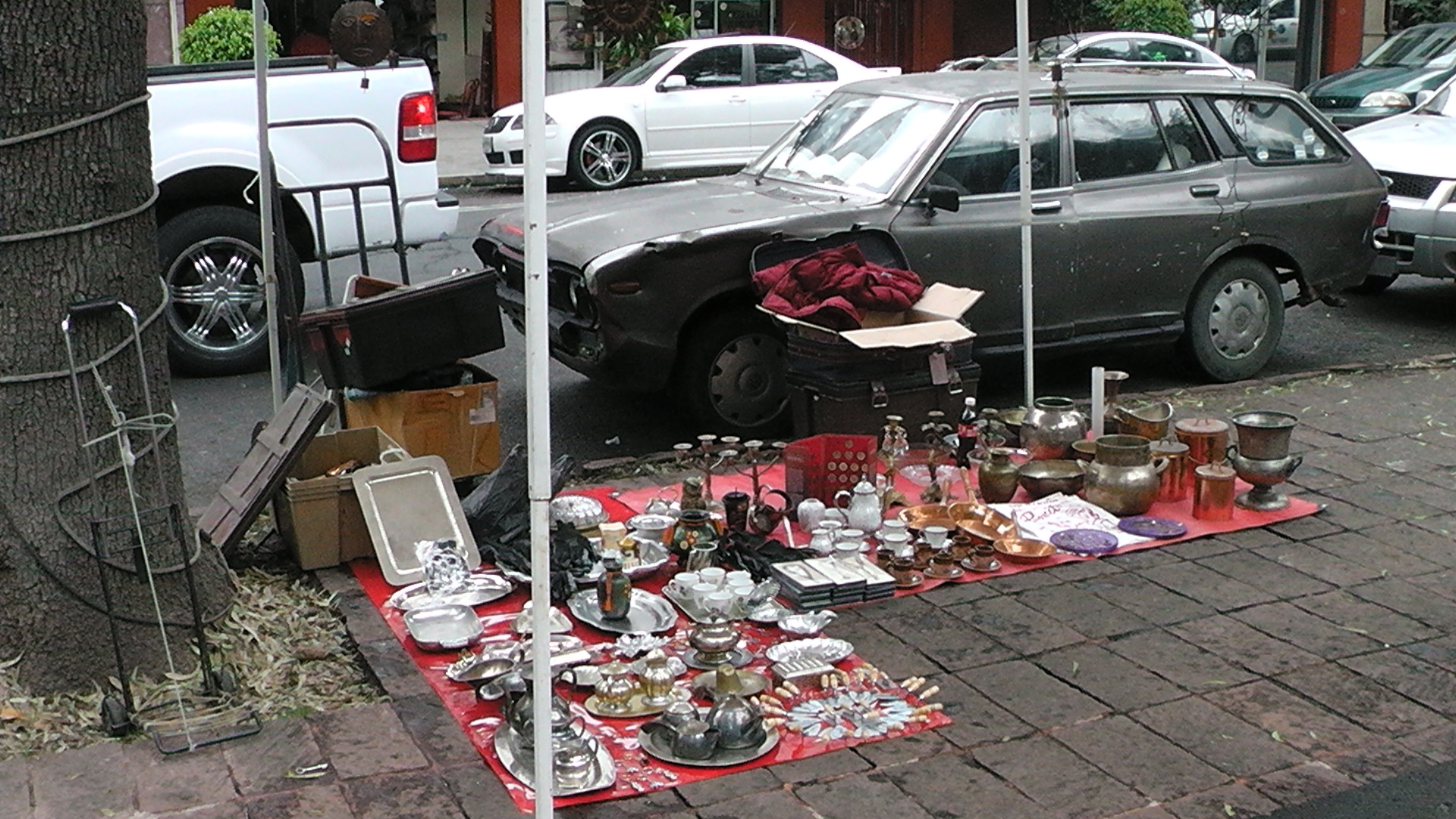 I had tasted blood, and I needed more. On Sunday morning, we awoke without heavy heads (!) and went a little further away to the market on the small tree-lined Jardin Dr Ignacio Chavez square at the junction of Colima and Cuauhtemoc Avenue. The stuff on offer was much the same as on Alvaro Obregon, and some of the vendors looked very familiar! The main difference was that it seemed much busier with Mexicans browsing and buying. If you decide to do both flea markets on Sunday, this market and the one on Alvaro Obregon are linked by a vast and teeming food and clothing market running around the Jardin Pushkin. 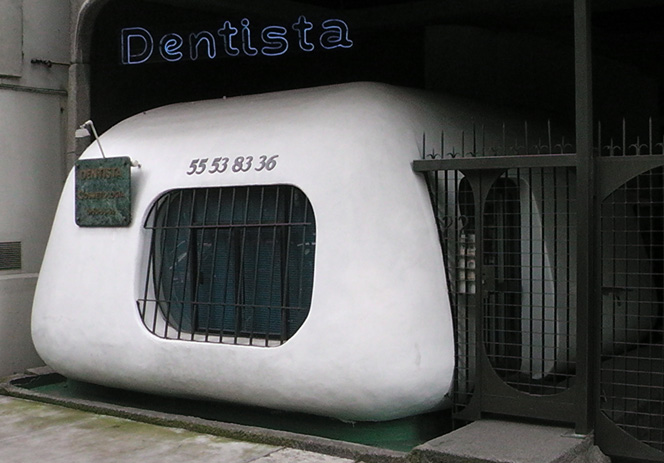 I found Mexico City to be a strange city, and the jury is still out as to whether I actually liked it. I enjoyed it immensely and, by and large, the people were friendly and welcoming. But it’s not really set up for tourists – yet – and sometimes we strongly felt like we were the only tourists around! We found some great architecture, culture, and design around, from the truly world-class Museum of Anthropology, to the the La Capital restaurant in Condesa, and even this 1960s dentist’s studio! For us, it was a three day city, but we do get around and make full days of it!
It’s a city on the make, and a city on the take. You have keep fully aware of what is going on around you, and what’s happening to you – like anywhere in the world, I guess. But maybe a little more so here. We didn’t feel in danger at any point, although we were firmly told not to walk around anywhere but the very busiest areas at night, and to take only private taxis at night or for long distances. From people selling newspapers to passing cars on Reforma to teenagers pushing fruit-and vegetable-laden wooden carts around the city streets, they work damn hard. It sometimes seems that everyone has something sell. And they’ll try and sell it to you, given even a glance! 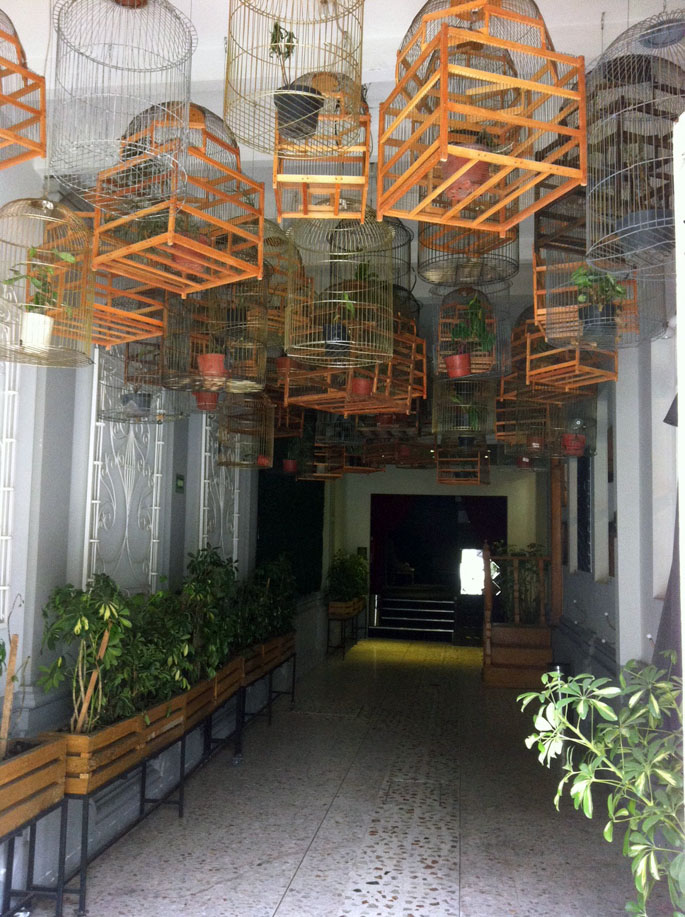 But watch out, as they’ll take something for nothing if they think they can. Restaurant bills nearly always had things we didn’t have on them, ‘more expensive spirits’ were said to have been used in drinks without asking, and always check the state of the meter in a public taxi before getting in. If the meter looks rickety or is partially covered, get back out or preferably don’t get in. If you’re ordering a private taxi from a hotel or restaurant agree the price with the person ordering it AND the taxi driver together before getting in.
The stupid thing is that the sums in question are (for us) sometimes so small – often 20 or 50 pesos (95p or £2.38) – that it hardly seems worth creating tension and upset in the grand scheme of things. But it clearly is, and I guess 20 or 50 pesos from a fair few people adds up! Also, it’s not always the case and the sums can be considerably higher.
If you came to this page via search results, you can read the second part by clicking here.