When you’re researching a book, you invariably come across fascinating information which isn’t strictly related to the subject of the book, but really ought to be recorded anyway. When I was researching for my book on Michael Harris and his work at Mdina Glass and Isle of Wight Studio Glass (now out of print), my interviews with his widow Elizabeth Harris revealed Michael’s background. 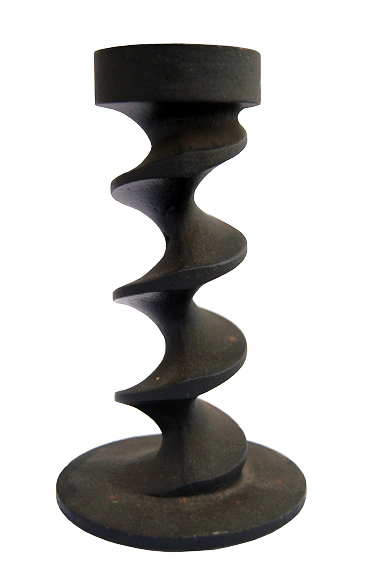 In 1962, Michael was offered the role of Tutor in the Industrial Glass department at the Royal College of Art, a position he held until he left to found Mdina Glass in 1967. What isn’t known as well was that at the same time, he was also part of an entrepreneurial design group called ‘Image Three’, or ‘Image 3’. His partners in the seemingly successful venture were Anthony Stiff and Ronald Mitchell, who were both potters. The group produced a wide variety of designs for retailers, manufacturers and distributors including the smokey grey glass Schweppes ashtrays found in pubs at the time, clocks, ceramic figurines, and a series of pine-framed coloured glass ‘sun-catcher’ kaleidoscopic display objects made up of different layers of coloured and textured glass. You really have to see one to know what I mean! Elizabeth Harris also contributed textile designs which followed the fashionable ‘Swinging London’ vibe of Carnaby Street in the 1960s.
Apart from a piece in the Harris family collection,  I hadn’t seen anything that could be firmly attributed to the partnership, until today. Passing through Otford Antiques Centre, my eye was caught by this 6.25in (16.3cm) black finished cast iron candleholder. The inside of the bowl is boldly moulded ‘IMAGE THREE MADE IN ENGLAND’. This is just the sort of design that would have been fashionable during the 1960s, and it bears a very close relationship to Michael Welch’s notable cast iron ‘Hobart’ candleholder designed in 1962, and showcased by Heal’s in 1967. Welch’s design uses discs, and the Image Three design uses a corkscrew-shaped column. As well as being superbly modern, the design hints at Medieval candleholders. A little  research at the excellent CandlePower website shows that another shape with Image Three marks has a Wigmore Distributors box.
So there we have it – although we can’t be sure that Michael Harris had input to this design, we can’t say he didn’t either. I paid a bargainous £6 for my candleholder (I didn’t even barter), and I’m not sure it’s worth much more than £15-20. It might be scarce and hard to find, but it’s his glass that we collectors want! Still, I simply had to have it…