Having missed the opportunity last year, I was delighted to be able to attend the annual Hornsea Pottery collectors’ event last week, held as part of the Hornsea Freeport‘s ‘Nostalgia’ weekend. Organised by the Hornsea Pottery Collectors & Research Society, the busy event sees exchange of information and new learnings, as well as allowing members to buy and sell, and build their collections.

My weekend started with a visit to the Hornsea Museum, in the charming seaside town of Hornsea itself. I was driven there by Pauline Coyle, author of the official biography of John Clappison, Hornsea’s lead designer (see below). This museum, contained in two pretty converted cottages, must be one of the best maintained and best organised small museums I’ve ever been to – and it’s all run by volunteers. The passion the curator Carol Harker and her team exude just shines through!
Over 2,000 examples of Hornsea pottery made from 1949-2012 are organised by decade and type, with each smart cabinet containing carefully curated and beautifully displayed ranges of pottery. You can see some of my favourite cabinets in the gallery at the bottom of the page. The four rooms and connecting corridors are laid out chronologically, so you really get a feel for the development of design, hallmark ranges. Of particular note are the 1950s and 1960s cabinets in the first room, and a cabinet in the centre of the second room which contains unique and rare pieces, including Clappison’s ultra-rare 1962-63 ‘Bust of a Girl’ lampbase and his rare 1961-63 ‘Abbey’ table lamps. 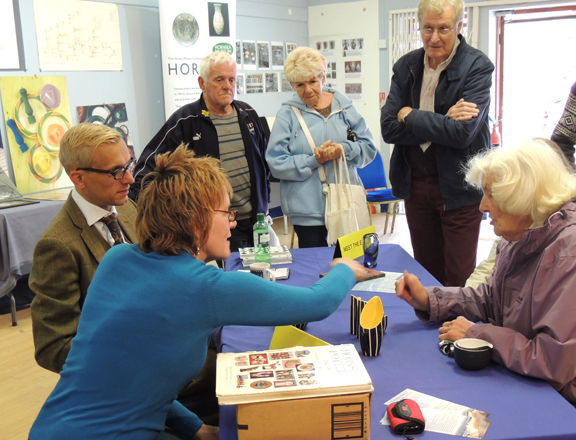 From there I was taken to the B&B I was staying at, a beautifully restored mid-19thC mansion in the heart of Driffield. It’s owned and run by David and Elisabeth who run The Crested China Company, which almost certainly offers the world’s largest selection of crested china. A pleasant and amusing chat over tea on the lawn followed by dinner, and then bed – in my own wing of the house, no less!
The next day saw the main event – the bank holiday collectors’ day at the Hornsea Freeport. I spent the day valuing all sorts of objects bought in by members of the public and fellow Hornsea collectors. Amongst the highlights I saw was a collection of mid-20thC glass (values from £30-500) and a very rare and desirable mid-1950s Christian Dior costume jewellery parure designed by Mitchell Maer (estimate £700-1,000). There was, as expected, a lot of Hornsea pottery and I was grateful for Carol and Pauline’s support with identification and values (above left). As ever, some unexpected rarities turned up, including a ‘Slipware Dots’ range sugar sifter that had never been seen before! Pictures are below, many courtesy of the club photographer Rita Hasdell. 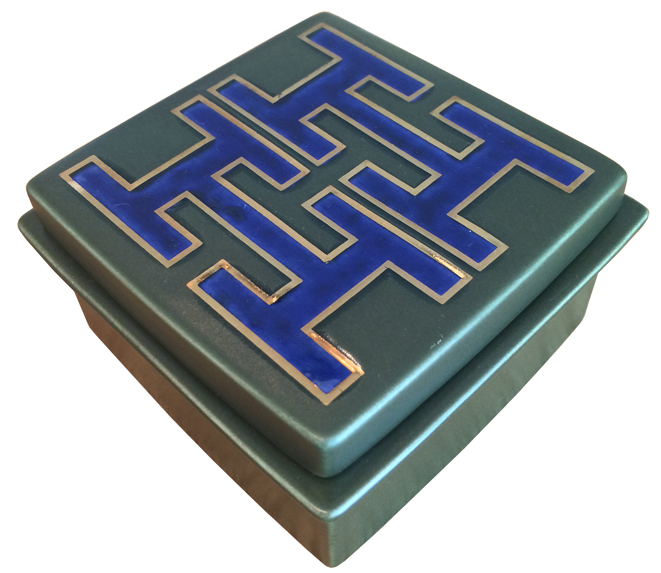 I managed to grab a chance to peruse the stands and was lucky to acquire two pieces I had wanted for some time. The first was a box (right) produced in 1971 for the department store Hammonds of Hull, to celebrate their 150th anniversary. It’s obvious why I bought it from the lid design – and it’ll make a perfect stationery box for my shop desk! The second was a box (below) from a range I consider hugely underrated – Clappison’s ‘Strata’ range, produced from 1981-83. The striped lid isn’t painted, it’s made from stacked rolls of coloured clay laid down together and then sliced like a loaf of bread into thin panels for insertion into the lid before being ground down and polished. With colours typical of the 1980s, each and every example is unique and the range didn’t last long as it was so time-consuming to produce and required great skill and patience. Despite having taken my chequebook along just in case, I was gobsmacked at the price – £13 for the two! 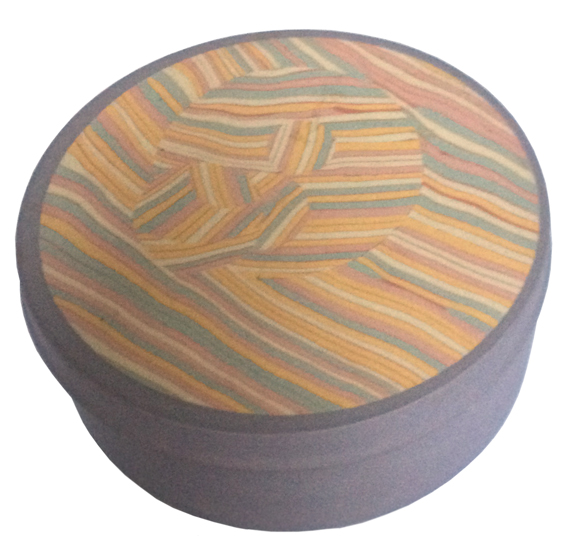 On that note, I couldn’t help but notice that Hornsea across the board really is VERY affordable. For great, often complex designs that are quintessentially representative of any given period, it’s all just far too bargainous and far too good value to my eyes. Supply is limited, particularly of pieces in perfect condition, so if you like it my advice is to get out there and buy it now! Before I knew it, my day was over and Pauline was driving me back to Hull to catch my train home, entertaining me with intelligent and thought-provoking conversation. I had a wonderful weekend and, if you’re up that way, I honestly advise you pop into the Hornsea Museum to see and support them. If you can make the next collectors’ event, so much the better. I promise you’ll be welcomed and will learn loads. I also challenge you not to come home with at least one piece of Hornsea..!

I was very grateful to be given two authoritative and definitive books on Hornsea Pottery. The first ‘Gone To Pot: The Life & Works of John Clappison’ by Pauline Coyle is available to buy on amazon for £15.75 by clicking here. The second ‘Hornsea Pottery 1949-80 – Its People, Processes and Products’, is considered the ‘bible’ to collecting but is sadly out of print. You may find a copy on Abebooks, if you’re lucky. If you use Twitter, I can strongly recommend that you follow Dorothy Tennant on @dottyonhornsea, Rita Hasdell on @hornseahasdell, Sally Roydhouse on @fabricmountain, and Pauline Coyle on @phizoog. Join the Hornsea Society by clicking here.

Thanks also to Sally for the kind gift of a beautiful printed fabric iPhone pocket – check out her site by clicking here.