If I’m out on ‘official’ business, I usually adorn my lapel with the silver pin (left) that shows my membership and support of the City of London Company of Arts Scholars, Dealers & Collectors. It’s in the form of the head of Minerva, the Roman goddess of wisdom and the arts. A similar gilt bronze head is one of Britain’s best known ancient Roman artifacts, and can be seen in the Roman baths at Bath (Aquae Sulis) today. I’m a firm believer that men can wear lapel pins, and the more extravagant examples are an easy way of adding a touch of the dandy or boulevardier to a look.
But I think if you’re going to do it, do a good job of it and also make sure it doesn’t look like you’ve stolen it from granny! Last week, I was delighted to be able to buy the rather amazing snake pin below from some dear friends who were clever enough to collect costume jewellery in the 1980s & 90s. 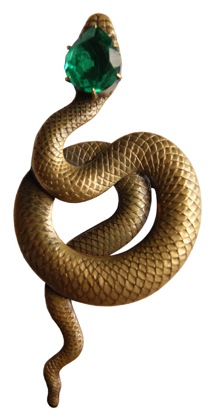 Although it looks like it’s made from solid gold set with a giant emerald, my snake pin is pure ‘costume’, being made from gold-coloured plated metal and green glass. It was cast, plated and assembled by one of costume jewellery’s giants, Joseff. Founded in 1935 by Eugene Joseff (1905-48), ‘Joseff of Hollywood’ built up a never-since-repeated close connection with Hollywood film studios, to whom it supplied scintillating jewellery for a plethora of major films and stars. Think Marilyn Monroe, Grace Kelly, Jean Harlow, Rita Hayworth, and even Clark Gable and Errol Flynn! All wore Joseff’s creations in classic films such as Gone With The Wind (1939), Casablanca (1942), The Wizard of Oz (1939), My Fair Lady (1961) and Breakfast at Tiffany’s (1961).
As such, many credit Joseff with reintroducing jewellery to modern cinema. If you want detailed information on his company and designs, I’d advise you to read Joanna Mangan’s brilliant article on Collectors Weekly by clicking here, or to buy one of Judith Miller’s amazing books on costume jewellery listed below. 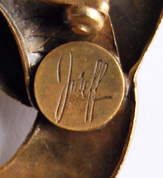 Joseff’s great skill was to produce simplified yet stunning, historically accurate designs that related to the film or character, or summed up the spirit of them. He also devised a special gold-tone plated base metal, which he called ‘Russian Gold’, that made his designs look delicious on the silver screen, even under bright studio lights. He rented his jewellery to the studios, allowing him to build up a vast archive, and sold replicas of the originals through shops, enabling others to wear a little Hollywood glamour inspired by their favourite film star. 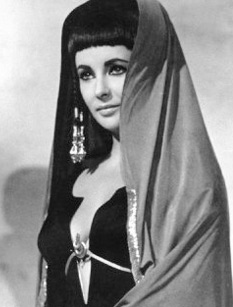 So where does my snake pin fit into this? Well, this design was worn by one of the icons of Hollywood film in one of her most legendary roles – Elizabeth Taylor as Cleopatra in 1963. In the film it formed the clasp of a belt worn around her chest, resting just beneath her bosom (see right). The choice of a snake or asp is obvious, given Cleopatra’s demise. The design was based on pieces discovered by Howard Carter in Tutankhamen’s tomb in Egypt in 1922.
As one might expect with Liz Taylor, there’s also a story attached. The design was by Joan Castle (d.2010), Eugene Joseff’s wife, as Joseff had tragically died in a plane accident 14 years earlier in 1948. When the belt (see photo of Taylor’s actual belt and clasp, below) was ready for Taylor, it was about 2.5 inches too small. Taylor blamed the error on Castle, who had measured Taylor personally. But the always thorough Castle was adamant she had measured Taylor correctly. Even though Taylor’s weight famously fluctuated greatly in the early 1960s, Castle was too professional to argue. 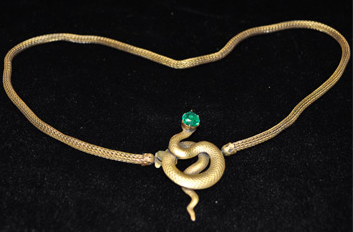 Taylor was also famous for her love of fine jewellery, much of it bought for her by her on-off husband Richard Burton. When her collection was sold at auction in 2011, it fetched a staggering £75 million ($116 million)!
Although this snake pin was produced with different coloured glass ‘stones’, mine has the original green as worn in the film. Even though Joseff’s replica jewellery was popular when it was sold, particularly those designs that were worn by Hollywood icons, they were not cheap to buy so can prove rare today. Surprisingly, given the star and film, mine is exceptionally rare. The story and associations with Hollywood royalty and a landmark film also make it enormously sought-after.
Behind all this, the snake is an eternally popular motif in jewellery and has many meanings from eternal love to rivers, water, fertility, and spiritual power. I think it’s also not difficult for a man to wear, and I’m looking forward to wearing mine. Whatever pin I wear, it’s always noticed and starts off a conversation. I’m a great fan of the stories behind antiques and colectables, so I’ll enjoy telling the story behind this one. 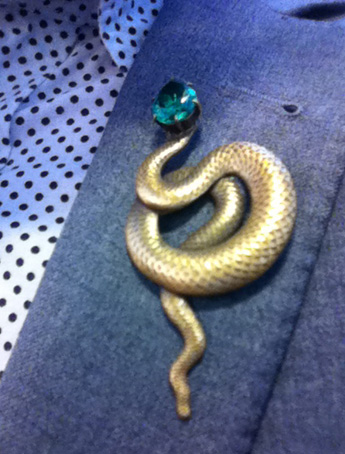 Image of Liz Taylor, Marilyn Monroe, and of Taylor’s belt against black velvet with thanks to and courtesy of Joanna Mangan and Joseff of Hollywood. All other photographs taken by and copyright Mark Hill.