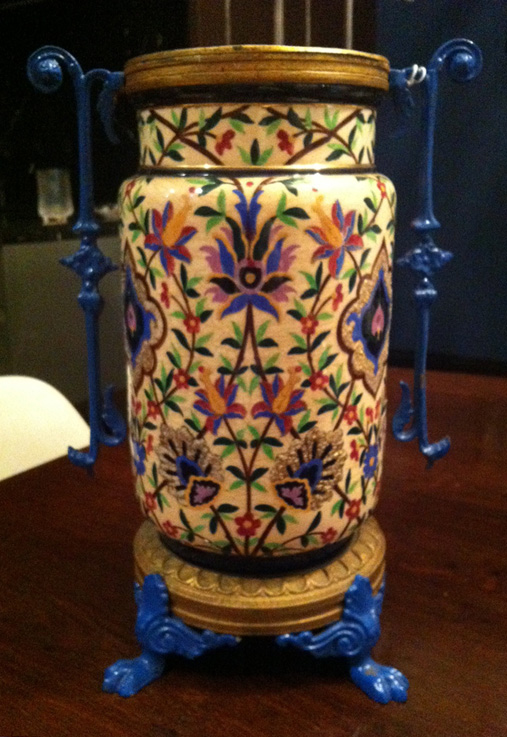 My role as a Patron of the King’s Lynn Arts Centre means that I get to go to visit the town a fair few times each year. Every time I go, I always make time to pop up the road to visit The Old Granary Antiques Centre, on King’s Staithe Lane, as I always seems to find at least one thing of interest there.
Last time I went, my eye was caught by a late 19thC stepped cylindrcial ceramic vase handpainted and gilded with a stylised Islamic/Arabesque pattern and embellished with metal mounts (left). I say ‘metal’ because it was difficult to see what type it was as someone had chosen to paint it with a rather vibrant hue of Humbrol enamel. Considering the vibrant blue in the pattern I can see why they did it, but I really do wish they hadn’t. The areas that they hadn’t painted retained their rather appealing, original century-old gilt bronze finish (below). 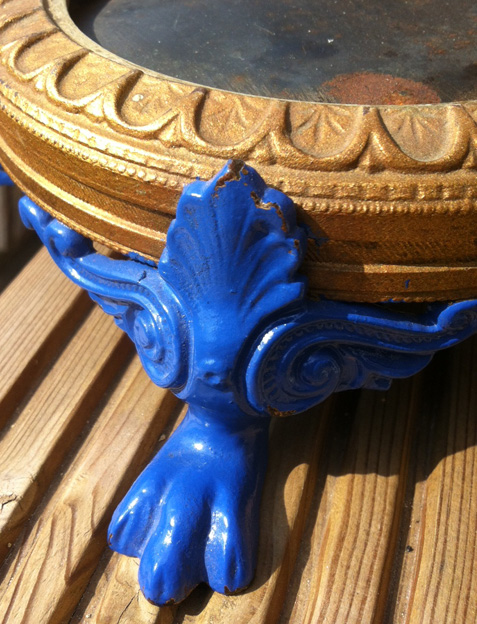 The blue enamel put me off somewhat, especially as it’s so hard to remove, so the £85 price tag seemed far too much to me. I also didn’t really need it, particularly as it is completely outside all my collecting areas. However, the stallholder seemed keen to sell it as it had been languishing at the back of a bottom shelf for quite some time. She encouraged me to make a low ball offer, à la Antiques Roadtrip, which I really don’t like doing as I consider it rude and bad for the business in general. But she insisted, and insisted again. Beginning to regret showing an interest at all, I offered £20 hoping she’d decline. But it was accepted and, before I knew it, I was carrying it out of the shop wondering quite what had happened. 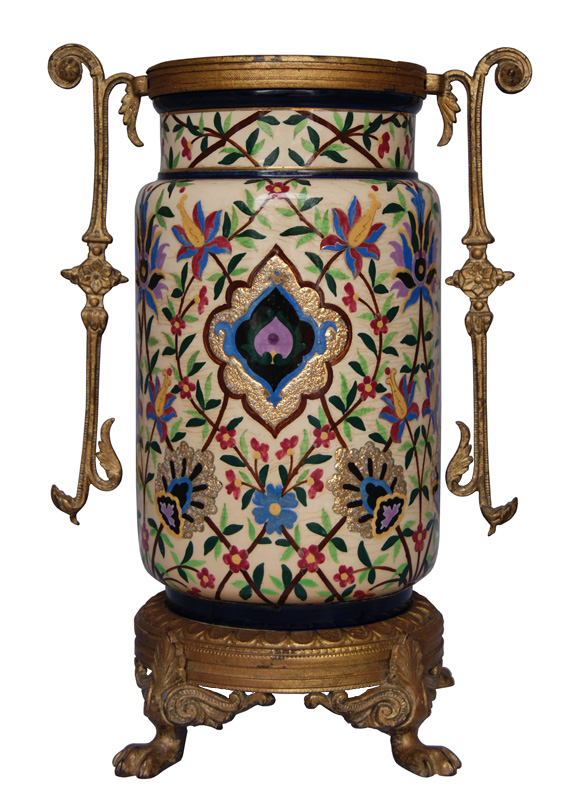 The enamel clearly had to come off. But how? A quick call to my engineer father revealed that trying Nitromors on a tiny area to see what happened was the best start. As expected the shiny blue enamel bubbled and lifted, and could be easily but delicately removed with a scalpel. So on to another area, and another, and another. And suddenly it was gone midnight.
I was hooked and sprang out of bed to begin again early the next morning. As the enamel was flaked away I realised the reason why it has been painted, patches of the brighter gold finish had been worn or polished away, revealing the dull bronze metal. I also made mistakes by applying too much Nitromors and removing the gilt along with the enamel, or making it liquid and wiping it away in error. I usually never attempt any restoration, leaving it for professionals rather than ruining a piece with my clumsy, inexperienced attempts. But the low price and the cathartic nature of the work appealed at the time, and I persevered for three whole days, ignoring paid work for my new obsession. 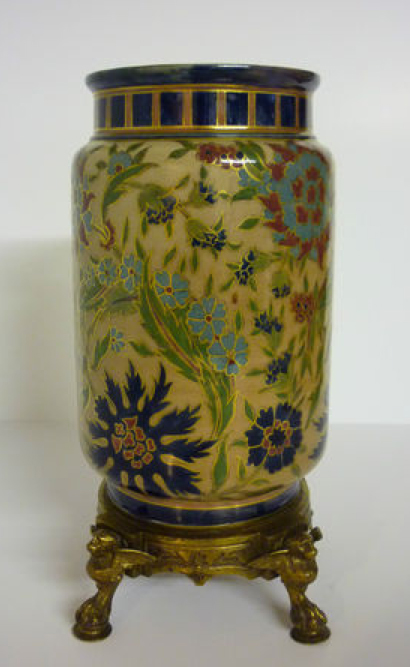 Once the enamel had been banished and the level of the moulded details revealed, I popped into Cornelissen in Bloomsbury for their advice on touching up the gilt. A couple of tubs of LeFranc & Bourgeois gilding wax and a very gold-finger later, and it was done. For me, the results (above) were well worth the satisfying hours of labour.
Now for the next job – what was it and when was it made? That could prove hard, as the only things I had to go on were the pattern number (2166) and an impressed partial shape number including an 8. I asked my Roadshow friend the ceramics expert Steven Moore, who suggested Zsolnay due to the pattern and the creamy glaze of the background. I also asked my Hungarian friend Attila, who contacted one of his friends who is a Zsolnay collector. He disagreed due to the pattern and colours, and suggested Fischer, another Hungarian factory who produced many ceramics in Zsolnay’s style.

Searching around eBay, I found a vase (right) that was the same form and size, and had a similar pattern and gilt bronze mount on the base. And, even better, it was fully marked with Zsolnay marks and the pattern and shape numbers (including an 8). I certainly don’t trust everything I see on eBay, but this seemed a pretty good lead.
What still wasn’t clear was what my ‘restored’ Hungarian vase might be worth, especially as it was probably once part of a pair sitting at each end of an elegant Victorian mantelpiece. I don’t usually trust eBay on such things again, but this piece was correctly identified, well-photographed, and well-described, thus making it a potential exception. As you can see from the screenshot below, I have a reason to be happy, particularly as mine has the rest of the metal mounts that were probably missing on that example! 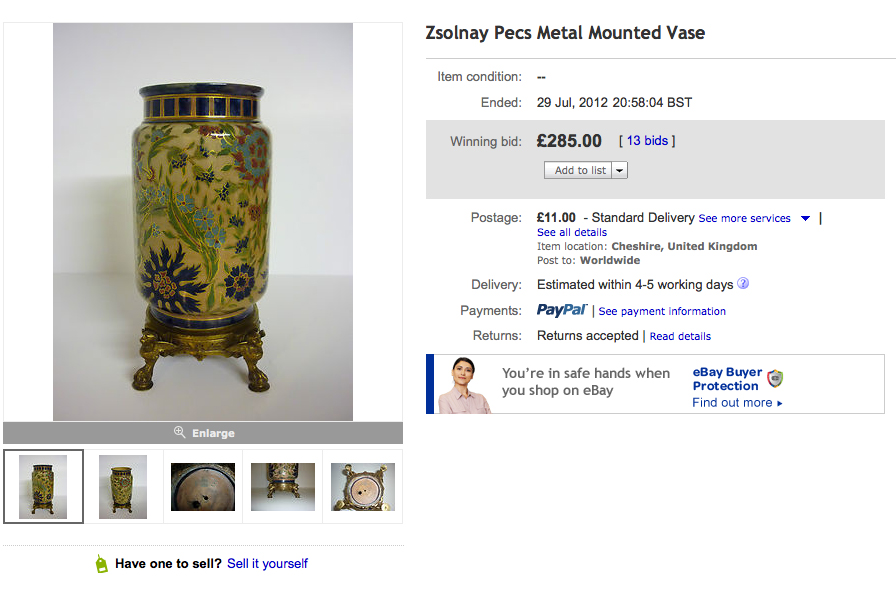