It’s not often that you get to meet the people behind the designs you collect, even though there’s more of a chance with postwar pieces. While I was in Novy Bor, I was lucky to meet Karel Wünsch, one of the best and most innovative postwar Czech glass designers who is globally renowned for his progressive cut glass. He now runs Galerie W, a thriving contemporary glass gallery with his wife, but still designs and cuts glass.
Novy Bor is steeped in the history of Czech and Bohemian glass, and Wünsch’s gallery is no exception as it’s housed in the building once owned by the famous Egermann family (below). Wünsch has known the house all his life, as his father bought it in 1921. He even remembers an elderly granddaughter of the great Friedrich Egermann living there!

Mr Wünsch and his wife are warm, friendly and open. He kindly gave me some copies of pages showing his celebrated designs for the early 1960s ‘Dual’ range (below), explaining that they gained the name not only as they used two colours, but also as they bore two types of cut – flat and angled. He also explained that it was very successful, and was produced into the 1970s for export to the West in comparatively large quantities. 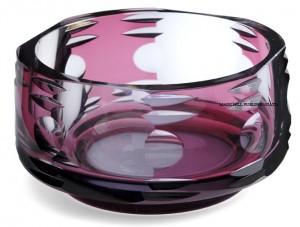 He also explained that ‘that was business‘, and his heart lay in the design and creation of unique pieces. I’ve always thought that his avant garde cut designs are more like modern abstract art, particularly when seen on paper. So I asked him how free he was to design in this respect, as the Communist regime banned modern and abstract art as ‘decadent’, only allowing Socialist Realist art that supported the Communist’s aims. I knew the answer already, but I had to hear it from the ‘horse’s mouth’, so to speak.
Mr Wünsch explained that he was completely free. The Communists didn’t deem glass as being able to convey a message – social, political, artistic or otherwise. It was simply a commodity that could be traded for valuable foreign currency, and could also act as a way of displaying the forward-thinking successes of Communism over the country’s historic export. Pointing at two of his most recent designs, which displayed all the hallmarks of Wünsch’s style, I asked him if they ever discussed his influences with him. They looked pretty modern to me, and if I had to sell I’d want to know what it was all about. Surely his inspiration would be hard to explain without getting into trouble? He shook his head, “No, they just weren’t interested.”
The two works I was referring to are below. Both were executed by Wünsch in 2009, and are heavily sandblasted and cut. The first is called ‘The Three Graces’ and has three heavily stylised figures that recall the poses of those in Canova’s famous statue. The inspiration behind the second is perhaps easier to see from my photograph. It’s called ‘Early Morning’ and was inspired by cloud formations Wünsch saw one morning. If they aren’t modern, abstract art, I don’t know what is. Both are available for sale from his gallery, and it’s worth noting that these new works will are few and far between. Mr Wünsch explained that no factory can produce high enough quality blanks to meet his expectations any more. As such, he’s slowly working through a limited quantity of approved blanks made some decades ago.

My final question to him concerned his use of cased coloured glass, particularly opaque white, which he then cut through. Why did he work almost exclusively with this style? Again, his answer spoke so much of the time. He had long admired the cased, cut and engraved Beidermeier goblets made and often sold at spa towns in the early 19thC. Not only the lines, colours and the forms, but also the happiness of the time they represented. Times that were much happier and more free than those he experienced through much of his life.
Opportunities to meet influential and innovative creators such as Wünsch come along rarely. I’m so very grateful to Jindrich Parik and Maxim Velcovsky for their kind support and help on my trip. Galerie W is only two hours’ drive outside Prague, and I can’t recommend a visit enough. You’ll not only find works by Wünsch, but two large rooms full of eye-wateringly wonderful contemporary Czech glass. I know I’ll be back. Oh, and I discovered something else that’s rather marvellous too, but more on that later…!