As we didn’t manage a holiday this year, and Summer wasn’t exactly hot, the banker and I decided to cash in some air miles and spend New Year in the hot sun of Florida. When I take a holiday, it doesn’t usually take long for that ‘itch’ to set in and for me to start keeping a keen eye out for antiques, vintage, or retro shops. I think my record is about three days. And I certainly didn’t break that record this time…
South Beach in Miami offered nothing, but the three days of relaxation were marvellous. We then drove down to Key West for a day or two, where I had more luck. Bear the somewhat tacky main drag of Duval Street as long as you can to turn off and go down Fleming Street. There are a couple of places here, the most interesting for me being Sam’s Treasure Chest. Looking just like an antiques or junk shop used to look, it’s packed to the gunnels with all sorts of goodies, generally priced at under $100 with, of course, a few exceptions. I nearly succumbed to a jazzy Czech Art Deco vase with silver overlay ($65), but was concerned about the combination of its delicacy and airplane overhead lockers. 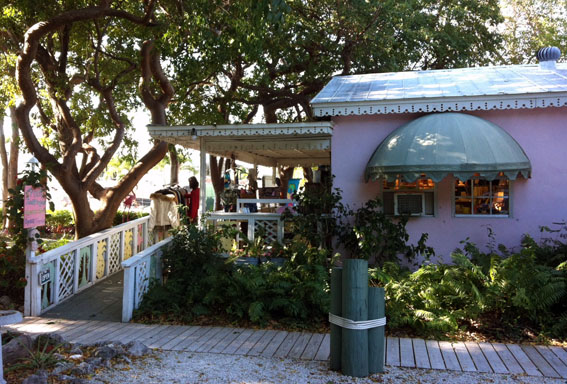 Next door resides an interesting local artist who also sells some vintage pieces at reasonable prices. It was a hard toss up between his some of quirky art and a huge Murano glass bowl. Alas, neither were transportable (sensible, eh?). Across the road, you’ll find Duck & Dolphin Antiques, which is quite a different story. If you’re looking for a high end antique souvenir, or have just bought a multi-million dollar home on the island, then this is the place to shop. Good (and better) quality French, Italian, British and American furniture and decorative arts a-go-go.
Surprisingly, the drive there and back through the Keys didn’t yield much. I had expected at least two large antique warehouses or malls. Just as well really as, away from the commercial sprawl of the various towns, the scenery is absolutely unmissable in places, the Seven Mile Bridge in particular. I did turn the car around to pop into one I spotted, called Pink Junktique (above). After all, who could resist a name like that?! Away from the racks of vintage clothes, many of which are consignments, there were some quite fun things here. They weren’t exactly high end but, considering my last two books, I was amused to see a piece of Caithness Glass sitting next to a piece of 1990s Czech glass! 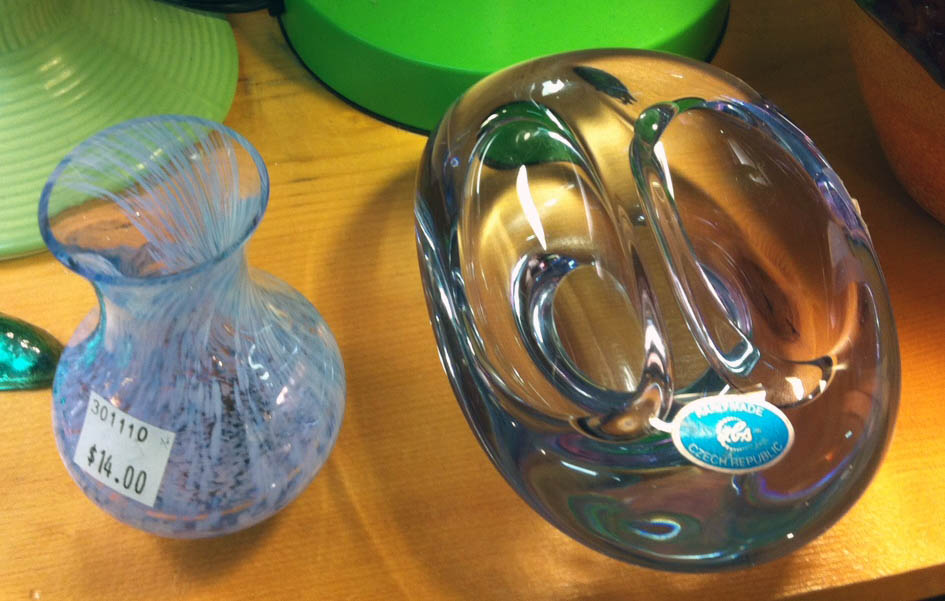 Our final destination, before returning to South Beach, was Fort Lauderdale. There’s much more to see here, but you’ll need a car to navigate the seemingly endless urban sprawl and wide highways.
Start on Wilton Drive, also known as NE 26th Street and NE 4th Avenue, just off the US1. At the junction with US1, Space Modern sells the best in mid-century modern, focusing on furniture and lighting, with prices to match. Think George Nakashima, Vladimir Kagan, Paul Evans, and Ettore Sottsass. Wow!
Further down, you’ll find two very pleasant smaller shops selling everything from ceramics to glass, sculpture, folk art, and pictures. Although I resisted a charming etching in JM Designs, I did buy something in Shades of The Past, which you can see in the photo below. I won’t tell you which piece it is (yet) as it requires considerable research to see whether a big-lunch-addled hunch is correct or not. Regardless of whether I am right or not, this is a great shop with super-friendly staff who very kindly packed up my purchase expertly making it ready for taking on board as hand luggage. 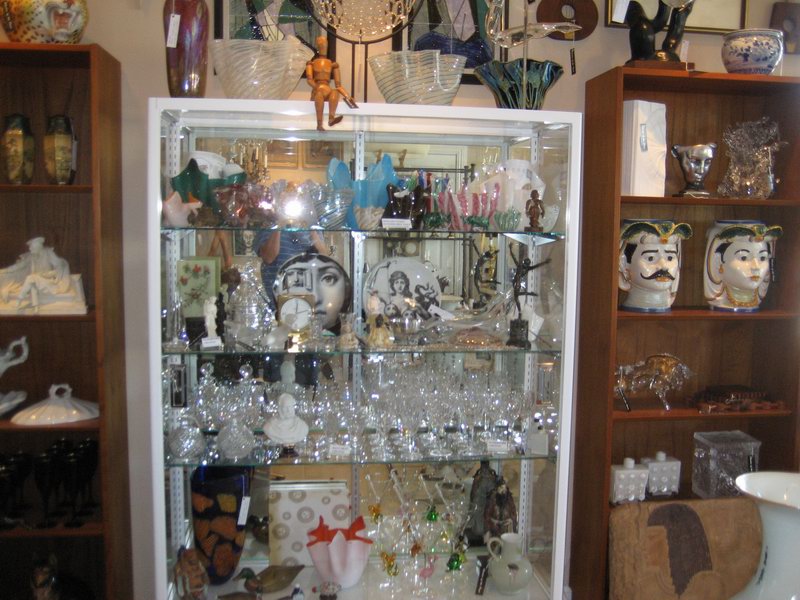 Go yet further down towards Sunrise Boulevard to find 50s 60s 70s Living, run by the British-born mid-century specialist Paul Goldberg (below). All I can say is FANTASTIC! Paul is very friendly, highly knowledgeable, and incredibly kind. He also seems to know everyone everywhere, so we chatted for well over an hour as I perused his varied and superb stock. Nearby, you’ll also find a shop called Decades, although it was shut by the time we got there as it was late and I had spent so much time chatting to Paul! He also recommended the nearby, huge Sugar Chest Antiques Mall, but we had to leave early the next morning so had to miss that one this time around. The key with Fort Lauderdale is to get hold of the ‘Modern Map’, available in any of the shops mentioned above, which shows the location of these shops and more.

Paul also told us about an antiques, retro and collectables market that takes place every two weeks on the famous Lincoln Road shopping district in South Beach. As luck would have it, it was being held on the coming Sunday, our last day there! Paul said he’d be going early (at 5am!) to catch the furniture bargains before returning to open his shop. As I’m not a morning person at all, I’d sadly miss him. He also said that the smaller pieces like glass and ceramics tended to be put out later in the morning anyway. Phew! 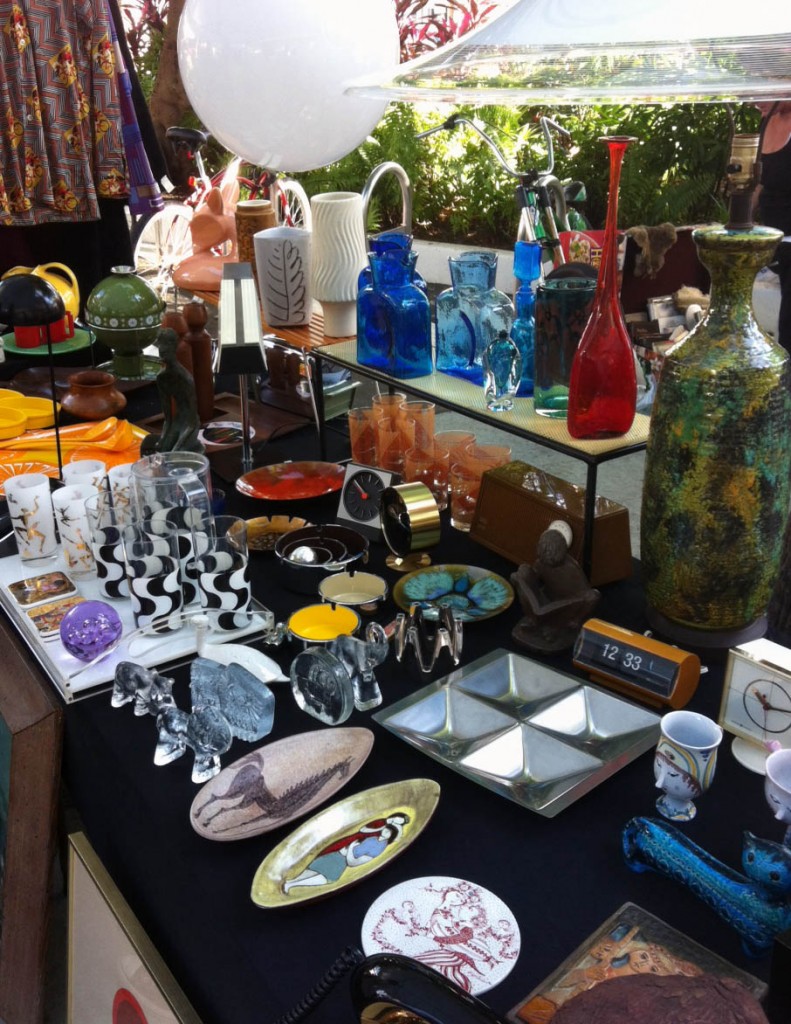 I made it there at about 8.30am, to find nearly all the 100 or so dealers already in full swing, but buyers thin on the ground. By the time I left a couple of hours later, many many more buyers and browsers had turned up, so I was glad to get there early and browse calmly. There were a couple of stands selling purely mid-century modern pieces (like above), and prices were – by and large – very reasonable. A little polite bartering made them even more reasonable. All that warmth and sun seems to make dealers very happy!
However, the over-riding theme of most stands was ‘decorative’, making it an ideal place to kit out a quirky apartment. Apart from the ever-present colourful bakelite (below), many pieces were Scandinavian in origin, showing the enduring popularity of the look. There was also a noticeable amount of jaunty, colourful and spangly costume jewellery, although dealers tended to know what they had, with many also displaying Miller’s books on the subject (well done, Judith!). 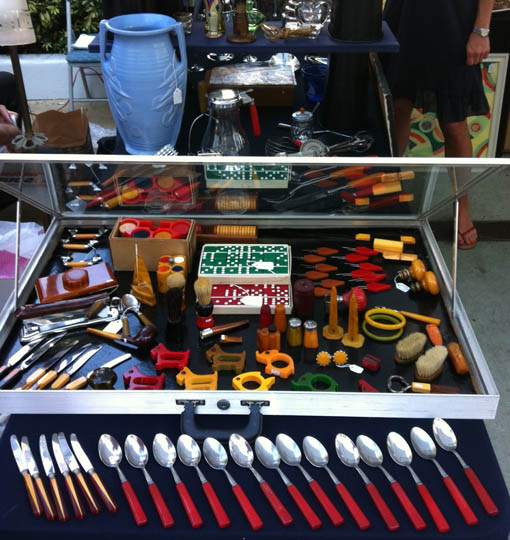 I ended up buying a nice piece of 1960s Italian pottery that I had wanted for some time ($55 from $75), and a late 1990s ‘whirlpool’ candleholder made by Skrdlovice, and designed by Frantisek Vizner ($18 from $25). Although late in date and small, the candleholder does have a good factory label, and the colour will useful as an example for dating against.
Amazingly, all the three pieces I bought on my trip managed to find their way home safely. The usually ‘trying’ security guys at the airport didn’t even bat an eyelid at the contents of my box! So now all I have to do is research that mystery piece…exciting! More on that later…I hope.