As a typical Aquarian, I always favour the underdog. I love the unsung, the hated and the ignored. Wandering around the Portobello Gallery of contemporary art and crafts with my wonderful uncle and aunt on the stunningly picturesque Otago Peninsula, I spotted a couple of cabinets of vintage New Zealand studio pottery. As the banker was temporarily elsewhere and couldn’t enforce my ban on antiques while on this holiday, I dived swiftly, somewhat reminiscent of a hawk spotting a mouse in a field below. 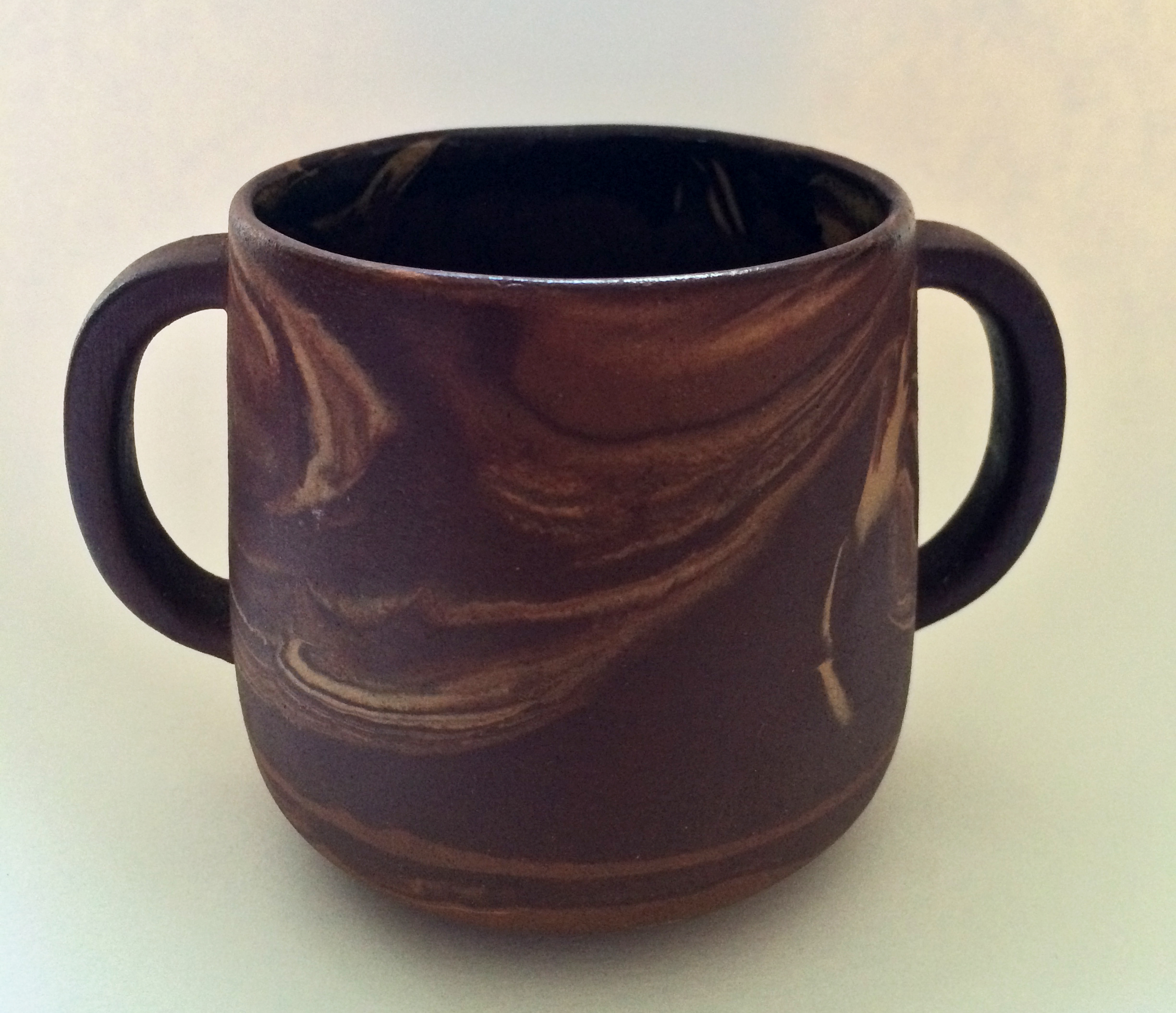 There was a fair bit of Crown Lynn, one of New Zealand’s most collectable names in 20thC pottery, but I wanted something more unusual. I went through a number of different companies until my eyes rested on a rather unusual double-handed cup. I was also a little peckish, and the swirling colours reminded me of fudge, toffee, cream and chocolate. That, the two handles and the fact it was ‘solidly proportioned’ (at 3in or 7.5cm high) made it seem like something I’d want to drink a hot chocolate out of on a cold Winter’s night. Our return to London in Winter wasn’t far off, and this seemed like the idea vessel to enjoy such a treat curled up on a sofa. Finely slip-moulded and with curving, square section handles, the base was inscribed Te Rona #22 by hand (below).
Te Rona pottery was made from 1966-92 by the Lovatt family in their home studio pottery in Temuka on the South Island. The swirling, marbled fudgey-chocolate slip glaze is their hallmark. It harks back to Agateware, introduced in the early 18thC and produced by Thomas and Josiah Wedgwood and, famously, Thomas Whieldon.
As each piece was decorated by hand, the pattern on each and every piece is unique – no two pieces are alike. The plain external surfaces of Te Rona pottery are usually matte, but are sometimes glossily glazed. The majority of  production was tableware, including teapots, coffee pots, cups, mugs and jugs. Lidded casseroles, bowls and (very rare) spoon holders in the shape of a standing boy are known – you can learn and see more here and here. In some ways, it reminds me of a simpler version of Briglin, a favourite British studio pottery of mine. Te Rona pottery pops up for sale occasionally on Trade Me, New Zealand’s version of eBay.

The company was founded in 1966 by Thomas Lovatt and one of his sons, Victor. Victor’s wife Rona also played a part and, of course, gave the pottery its name. Thomas and his two sons had previously worked for the notable Temuka Pottery, and founded the business on Thomas’ retirement. When Thomas died in 1969, Victor was joined by his brother Stanton. Victor died in 1974 but Stanton continued making Te Rona pottery until 1992. He died in 1997. The Temuka museum is said to hold a good collection and some paperwork on the pottery.
It’s still early days for the pottery on the secondary market and interest and prices are generally low – my piece only cost me NZ$12 (£6). Now I am back in wintry, cold and damp London it’s time to try it out, perhaps with some deliciously rich Dallmeyr drinking chocolate…

With thanks to posts on the New Zealand Pottery Forum for providing information.