That isn’t a line I’ve ever used before, but I certainly could. Anyone who knows me knows that I hardly keep my love for etchings a secret. And, as there are over 150 of them, they’re downstairs as well as upstairs.
I’ve been buying etchings (often generically called prints) since I was a schoolboy in Guildford. I used to visit a wonderful shop called Goodall (I think), hidden away upstairs above a shop down a side street off the picturesque high street. Then it was off to the market on North Street on Friday to find a suitable frame for my purchases. Of course, I couldn’t afford much as my only form of income was a paper-round, but I always liked what I bought and every single one is still with me today. Although I’ve researched some of the artists who produced them, I’ve never been too academic about this collection. I just enjoy it, and enjoy adding to it. 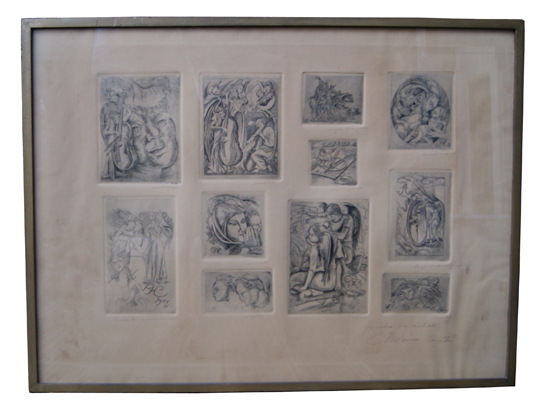 Every time I go to a fair or centre, I keep an eye out for a good etching. The decades that have passed since my first purchases haven’t really changed the prices. Providing they’re not by a ‘big name’, you can find a very pleasing piece, typically in its original frame, for anything from £5-50. The same goes for auctions. Obviously, larger more decorative pieces, or those with great cross-market themes such as the railways, can cost more.Wandering round a very cold and rainy Ardingly antiques and collectors’ fair this morning, I spotted something I hadn’t seen in the flesh before, which is shown above. A group of etchings all on a single sheet. And what a sheet – it measures a massive 29in (74cm) wide by 21.5in (55cm) high! And it’s framed in its original frame too. The sheet is printed with impressions taken from eleven different plates, each showing what appears to be a loosely Biblical, almost Symbolic themed scene. You can see them below, and each is titled in pencil in Spanish. I hope you’ll agree that they’re ‘good things’. The bottom left is signed in pencil ‘prueba de artista Federico Conti‘, making it an artist’s proof – so, the best or ‘modal’ example from a series of impressions taken from a copper plate.
Each print contains the artist’s initials, often arranged in an extravagant monogram, sometimes quite large in size or integrated into the design. I noticed that different profiles of a man are hiding in four monograms and presume that this is the artist himself. Some are also dated within the plate and, unusually for the subject matter and style, these dates range from 1948, through the mid-1950s, to 1968.
It’s a skilful arrangement of skilfully executed and appealing etchings. I know arranging different impressions like this on a single sheet isn’t unique, but it is unusual. It may have even been meant to be cut up, despite the close proximity of most of the etchings to each other, although I doubt it.
The paper has mellowed to a warm honey colour, which may have been helped along by an owner who was heavy smoker as the glass was pretty filthy when I cleaned it at home. It could be restored, but it will work wonderfully on our blue painted walls.
Although I’d love to have known more about Señor Conti, if I had read his name correctly, I really didn’t mind knowing nothing. Like everything in this collection of some 20 years and growing, I just like looking at it and appreciating the combined technical and artistic skills that went into making it.

And, at £50, I thought it was a veritable bargain.

And I also thought that that was the end of the story until I tweeted a link to my post, as I usually do. Within an hour, one of my followers and friends, the arts & crafts and 20thC design dealer @studiotic (www.studiotic.com) had replied suggesting Federico Cantù. It turned out that I had read the name incorrectly, and he was correct – a quick search through Google Images yielded the very same etchings I had bought today, some signed in the same way. Looking at a photograph of Cantù (below), even the profile of his face matched those in the monograms perfectly. The power of social media, eh? 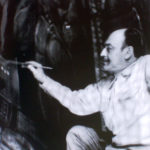 I’ll leave an extensive biography of Federico Cantù (1907-89) and his many achievements to Wikipedia, but will say that he is considered an important Mexican artist who was talented at painting, drawing, etching, sculpture and creating murals, the latter being something of a 20thC Mexican speciality. Lauded from an early age, he studied briefly with Diego Rivera and knew Pablo Picasso when he lived in Paris, aged only 16. Despite (unsurprisingly) working in a modern and avant garde style, his subject matter was primarily Classical, historical and religious. As such, he was largely passed over in his day as his work, particularly his murals, did not exude and celebrate the spirit of Mexico like those of his more famous colleagues such as Rivera did. This led to him being dubbed El gran olvidado (the great forgotten one) in Mexico. His drawings were particularly admired throughout and after his lifetime, and he began creating etchings and drypoints with world-famous fellow Mexican artist Carlos Alvarado Lang in 1945.
Looking at auction prices across the world, Cantù’s oil paintings seem to sell for mid-high thousands of dollars and regularly exceed $10,000 – in 2005, Sotheby’s sold one for $19,000 which appears to be a (current) peak. Drawings tend to fetch hundreds of dollars, or low thousands of dollars if large and complex, and etchings like mine seem to fetch around $150-250 each, depending on the size and presumably the scarcity and appeal of the etching itself. I have eleven etchings on one large sheet signed as an artist’s proof, so £1,500 doesn’t seem unreasonable, does it?  ‘New’ markets like Mexican art that have developed over the past decade or so are still very young compared to others and arguably still have plenty of growing up to do. How long will ‘the great forgotten one’ remain forgotten? Who knows? I’m thinking not too long.
Earlier today, I was happy to hang them on my wall, enjoy them and wonder who made them. I have to confess that I’m obviously quite a bit happier now. They’ll still stay on my wall though, but my smile will be just a bit broader when I pass them.
Whilst the rest of my collection together may not be worth even a fraction of this set, but has probably cost more over the years, it must have proven useful in training my eye. I know that luck played the major role today – after all, how many fairs have I been to and how many prints have I looked at? But, still, nothing beats that that ‘getting your eye in’ experience. It’s always the best way of learning. Only then can it really pay to trust both your eye and your instincts.

With many thanks again to Studiotic for the benefit of their expertise, experience and expert eye. Oh, and Twitter played its part too, for providing the forum for it to happen – and quickly.