2021 is nearly over and it’s time to look forward to a relaxing break and then the coming year ahead. But right now, it’s time for a much-needed break, so our office will be closed from Wednesday 22nd December until Monday 10th January inclusive. Any and all enquiries or sales received between those dates will be answered and dealt with when we reopen on 10th January 2021.

PLEASE NOTE THAT BREXIT & THE OMICRON VARIANT
ARE CAUSING EXTENSIVE DELAYS
TO ALL DELIVERIES OUTSIDE THE UK.

Please be patient – some deliveries to mainland Europe are currently taking three weeks.
Once a book has left our hands it is beyond our control.

Now for some information about the picture below! My first professional job in the industry was as a porter and then Junior Cataloguer in the Collectors Department at Bonhams. One of my favourite areas at that time was vintage fountain pens, and I was always delighted to work on those auctions. I still use a vintage Parker 51 or mid-1950s Mont Blanc every day, and was over the moon when Ian Dixon, the award-winning picture framer I’ve known for years gave me the festive front page of the Daily Mail shown below.
Dated Saturday November 20th, 1920, the full page advertisement for Waterman’s pens at L.G. Sloan shows an early version of Santa Claus. This was before the fat, jolly man in a short red coat popularised by American-born Swedish artist and illustrator Haddon Sundblom during the 1920s in a series of advertisements for Coca Cola. Santa’s bulging sack carries the screw-motion ‘Safety’ pens typical of the 1920s, as well as early lever fillers in engine turned black hard rubber, some with metal embellishments.
It’s a wonderfully visual thing, but doesn’t really have a value as it’s in terrible condition, having been found behind a picture that Ian was asked to reframe. It’s torn in a number of places, drier than the Sahara, and stained where it was folded to fit the frame. But that’s not the point – it’s just a wonderful thing, and very rare and very festive too. And nearly a century old!! If you’re not after a fountain pen this year, I hope that you receive whatever ‘Christmas Gift of Permanent Value & Appreciation‘ you desire.
Happy Christmas, one and all! 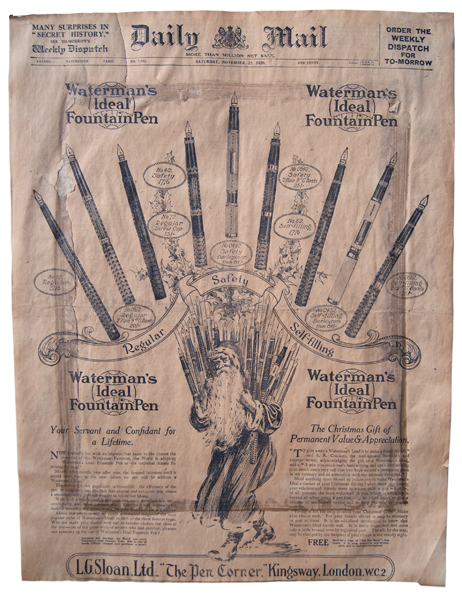