Who could resist? You’d just have to stop the car and go through the entrance to see what the Mystery Spot is all about. Well, I would anyway!

A ‘Mystery Spot’ is the name given to a number of areas of ground in the US which claim to have amazing gravity-defying or ‘mystical’ properties. The owners have usually built small houses or huts on top and, upon entering them, people appear to be able to walk up walls effortlessly, and balls roll and water flows upwards. It is claimed that this is the result of some form of alien technology or science-defying phenomenon from ‘dielectric biocosmic radiation‘ to a ‘magma vortex‘ to landing technology for alien spacecraft, or even a buried alien spacecraft itself! 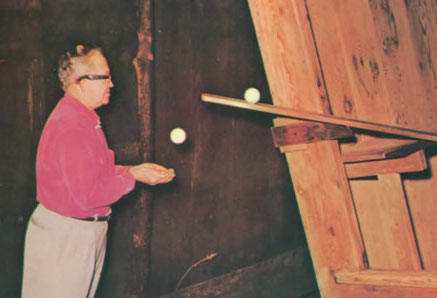 Of course, none of these are true and the amazing effects are caused by tilting the building and tricking our senses of spatial awareness, perspective and direction in the walk-up to the building. By the time you enter, your angle has been shifted although you still believe everything is as it is everywhere else in the world. There’s a great explanation with diagrams here. 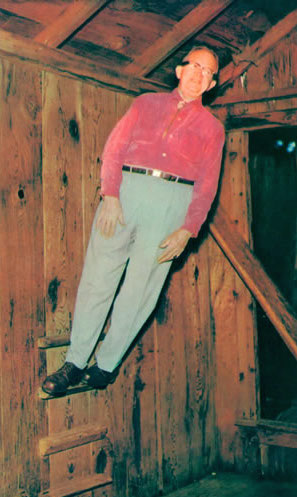 Even though you know the truth, they’re still great fun to visit and the entire experience is tailored to entertain. As such, they’ve been popular with tourists since they were first introduced during the Great Depression in the 1930s. The postcard shown above, which I bought for 50cents on my last trip to the US, is for perhaps the most famous Mystery Spot, near Santa Cruz in California. It probably dates from the 1960s-70s and has a wonderful period feel to the colour. There’s almost something reminiscent of those 1960s Gerry Anderson-type sci-fi puppet shows, especially in the logo. I also like the way the spot itself is hidden behind dense forest, revealing nothing. Next time I’m lucky enough to take a holiday on the West Coast, I’ll be sure to visit.
In the meantime, I’m off on a vacation somewhere else from Thursday 8th August to Sunday 25th August inclusive. My shop will be closed during that time and any books ordered then will be sent out on Monday 26th August. I hope you’re enjoying the Summer break.