I’ve been collecting inexpensive pictures, and etchings in particular, since I was about 15 or 16 years old. I’m sure my friends thought I was weird. In fact, I know they did. What attracted me, apart from the prices I could afford as a schoolboy, was that there was usually a story of some sort lurking behind. Be it about the artist, the place, the person or the scene depicted, or any combination of them. Some two and half decades later, I’m still doing that. It’s fun and leads me down avenues of learning I’d otherwise never know even existed. 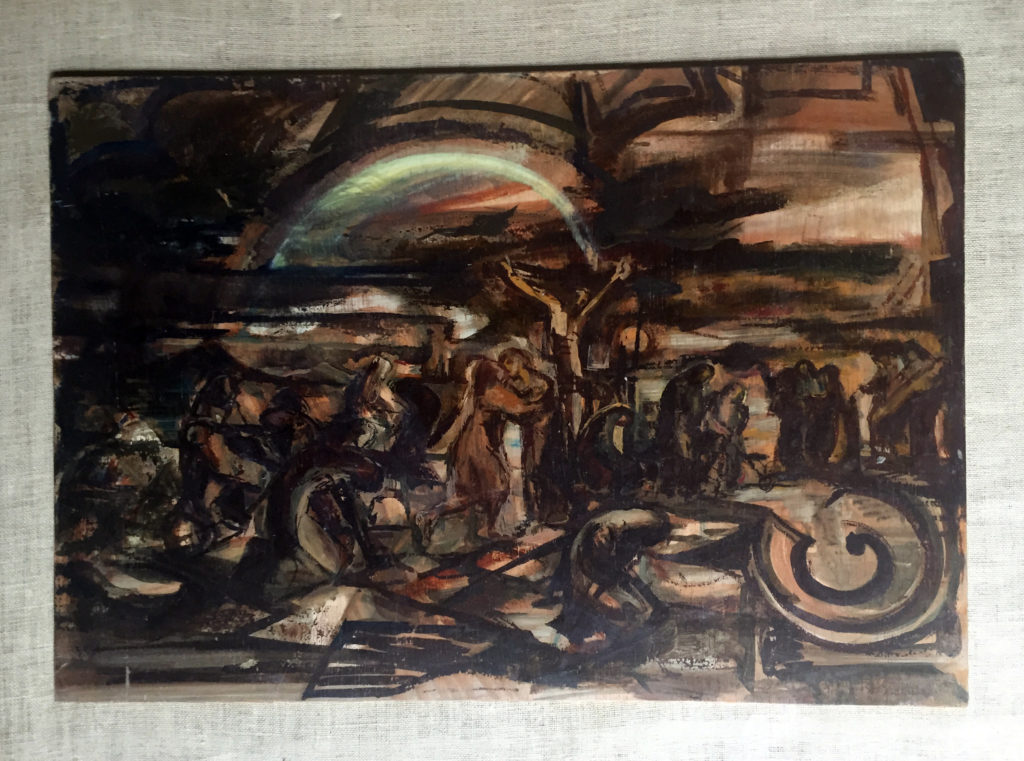 Wandering around my local auction house recently, I spotted this rather murky brown, abstracted oil on board, mounted on a hessian covered board, described simply as ‘A Helen Grunwald oil on board religious study.‘ I knew nothing about the artist, but she appeared a few times in a quick Google search. I spotted a few other groups of rather good and more finished paintings and drawings of London scenes, and left low bids on them all. Which wasn’t a problem, as the estimates were around £10-20 for each group.
I only won the religious group that caught my eye first, for £20 plus buyer’s premium. Not surprising, as a lot of five framed original scenes of London would always fetch much more than £10-20. After collecting it, the journey began. 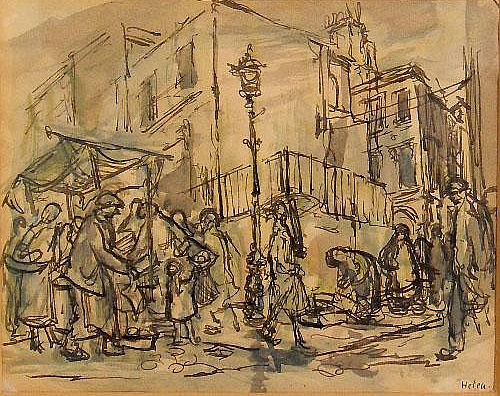 Helen Grunwald was a Jewish artist who was born in Vienna in 1925 and died in 1988. According to the Association of Jewish Refugees Information magazine from December 1986, she fled Austria with her mother in 1939, following the Nazi ‘invasion’. It appears she never married, as she is constantly referred to as Miss Grunwald. In England, she studied under Henry Carr at the Beckenham School of Art from 1941-44, and then under Carel Weight at the Royal College of Art from 1949-52, thus gaining the ‘A.R.C.A’ post-nominal letters. Later, during the 1960s, she became an art teacher at Paddington & Maida Vale High School. 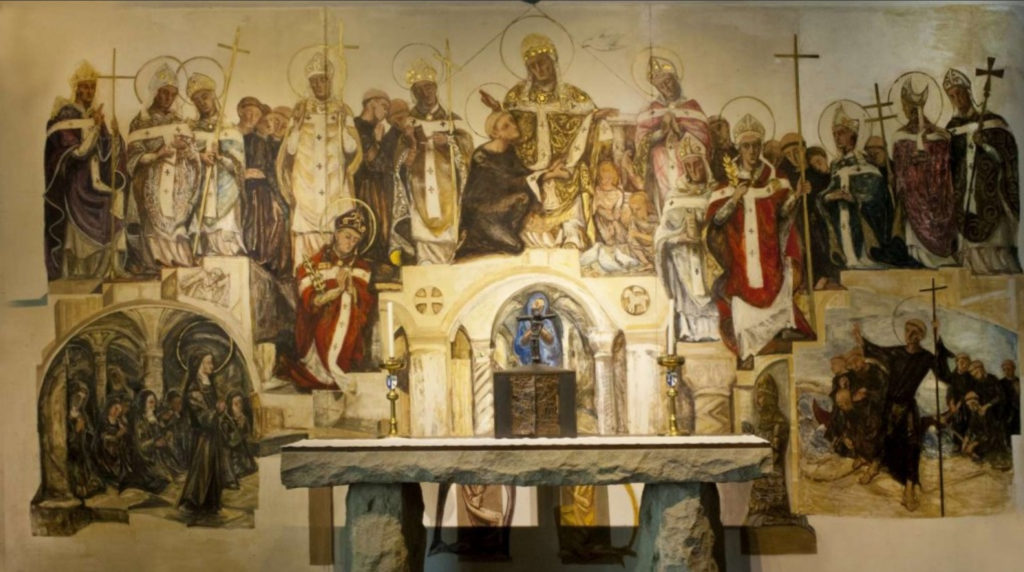 Looking at what has been sold at auction in the past, she seemed to focus on atmospheric scenes of London and some surrounding towns from the 1950s–70s, many populated by rather earnest people going about their business. Music and architecture are recurring themes. She had talent – at least I think she did. A few portraits have also passed through the salerooms, but mainly in large groups at low values. Some are signed ‘Helen’ or ‘Hel’, but many are unsigned. She seemed to have enjoyed some success in her lifetime and exhibited at a number of prestigious galleries including the Leger, the Leicester and the Berkeley. She also produced murals of the Canterbury saints at the church of St Thomas in Canterbury (shown above right). 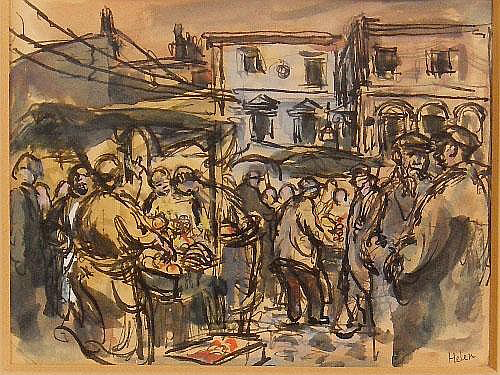 In the same vein, many references to her state that she was commissioned to decorate the interior of a chapel in Marylebone in the 1980s, towards the end of her life. It appears she lived nearby in Little Venice, as her studio contents were apparently sold off in the 1990s at Phillips’ salerooms. 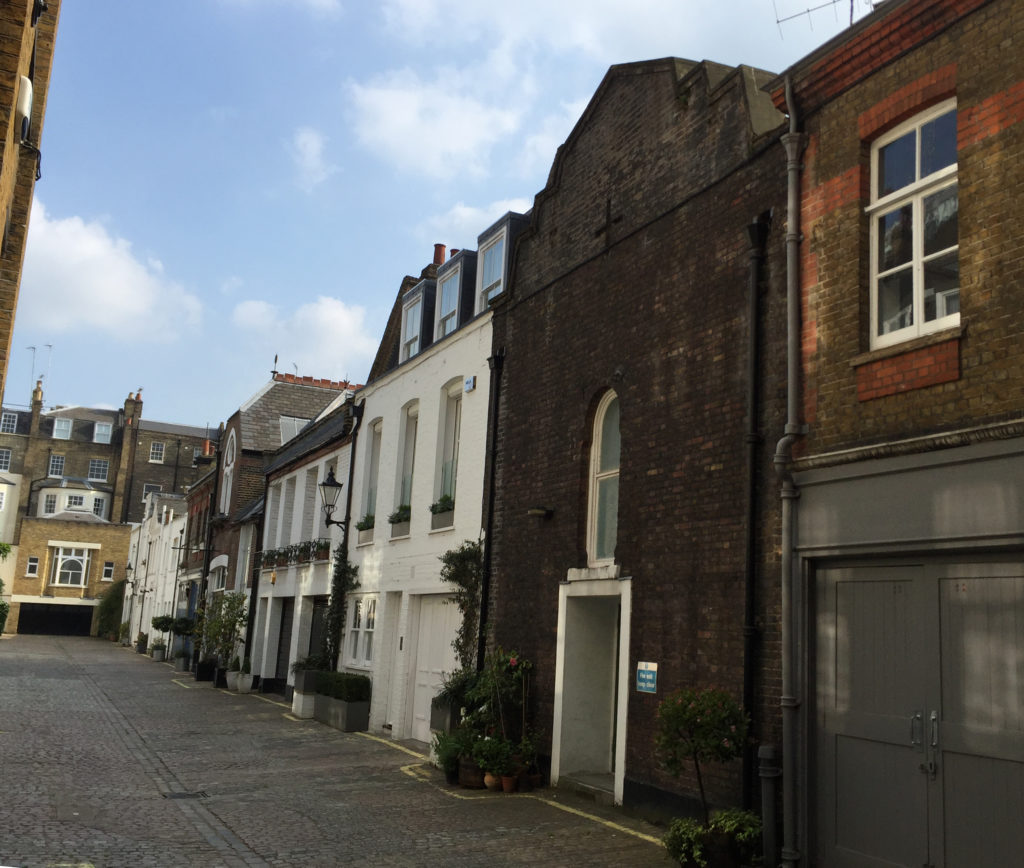 But back to the chapel, and my religious study.
Googling further revealed that the chapel was located behind 32 Welbeck Street, in a mews street (right). Built before 1766, the house (below) became the residence of the chaplain to the Russian ambassador in 1813. He created a chapel there which, despite its initial simplicity, became the leading Russian Orthodox place of worship in London until 1921.
On 2nd June 1844, Tsar Nicholas I visited, drawing further attention to it. From 1864-65, it was enlarged and rebuilt, with a dome, to a design (below) by the architect James Thomson (1800-83) that was influenced by strong Russian desires for a Byzantine style.
This style governed the paintings and iconostasis, which were produced by Russian artists after an idea suggested by Prince Grigory Gagarin.

The chapel received a second Russian Imperial visit in 1874, when Tsar Alexander II included it in his tour of London. Despite being enlarged in 1865, the influx of Russian emigrés after the 1917 revolution made it too small. In 1921, the congregation was moved to St Philip’s, on Buckingham Palace Road, and the iconostasis and paintings were moved there too. The Russian embassy’s chaplain continued to live at 32 Welbeck St until 1923, when the building was leased to the Society of Radiographers who used the denuded chapel as a lecture theatre. 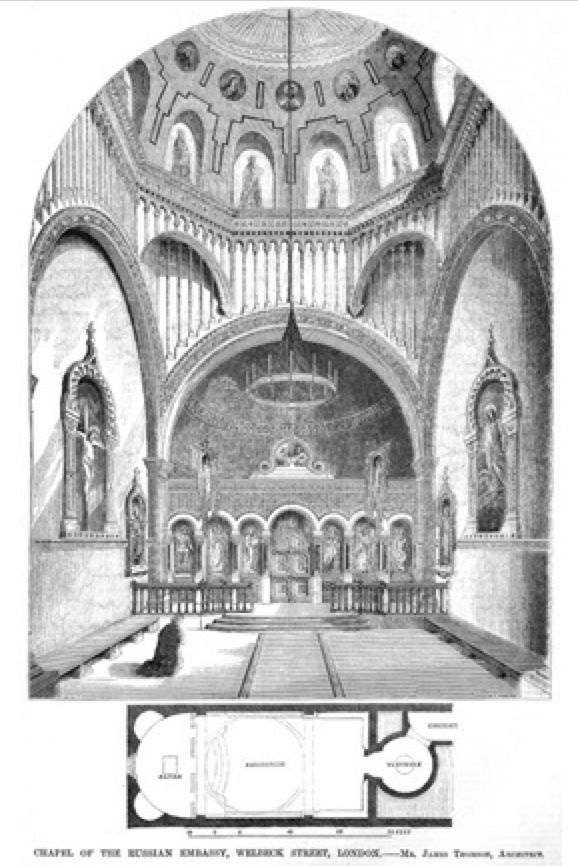 A few more tenants and owners later, the Variety Club of Great Britain took over the lease in the 1980s, and converted the chapel into a meeting room. After failing to gain permission to convert it into offices in 1985, they commissioned Helen Grunwald to decorate it with murals and repaint the roundels of the apostles in the dome. Grunwald echoed the Byzantine style of the original decorations, by then (and still) preserved in All Saints, Ennismore Gardens, and produced murals based around human suffering and healing through resurrection. As well as Biblical scenes, she included scenes that referred to Nazi persecution, including showing women and children in a gas chamber. The AJR Information article notes that the “many people” who came to see the murals being painted (including a dustman and his brother!) were “spellbound by the message of horror and compassion.” 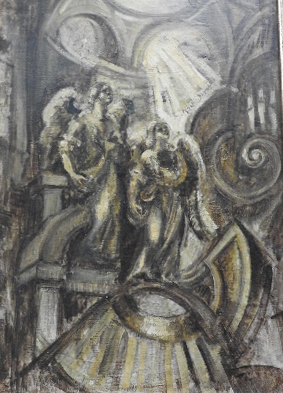 An Ecclesiastical Society newletter of April 1985 states that, as the restoration of the chapel and murals were part-funded by Westminster Council, the chapel had to be made open to the public. Grunwald’s paintings “attracted favourable notice” from the public and crowds came to see them, which was quite unexpected by the building’s owner and tenants. But the Variety Club weren’t only worried that their meetings would be constantly disrupted, they were also worried that attendees would be distracted by her take on the popular subject of The Harrowing of Hell. As a result, the paintings were to be “hidden by screens“. This clearly wasn’t enough and they proved to be too strong for the Variety Club, and Bartlett records state that her murals were “subsequently painted over”.

Back to my painting. It’s clear it’s a study for something more finished from the sketchy, rapidly painted nature, and by comparing it to her other paintings online. There isn’t a similar scene in her murals at St Thomas’ church in Canterbury. The strong curve to the top left of the crucified Christ, the heavily painted square forms above it, and the strong curve on the bottom right (below) may be part of the intended image. But what are they? Or could all, or some, of them be quickly sketched-in architectural features, showing how the design would fit in to Thomson’s architecture as a mural? The theme certainly fits perfectly – Christ suffering on the cross and dying for our redemption. 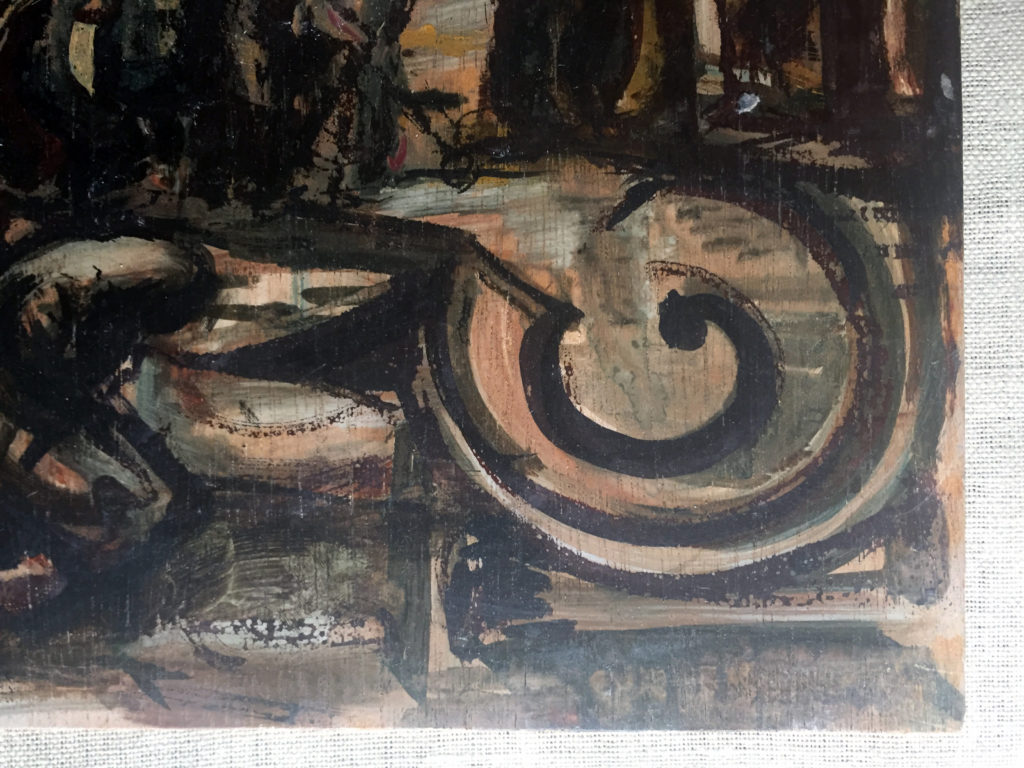 Providing Grunwald’s murals have really been painted over, rather than having been boarded over and the boards then painted, I’ll probably never know. I’ve searched online for photographs of the interior taken in the late 1980s, but surprisingly with no success. Perhaps you know of some?
So there we have it – is my painting one of the last surviving records of these murals? Are there others? Where are they? In particular, are there studies for The Harrowing of Hell and the gas chamber murals? I’ll be keeping my eye open for any other paintings by Grunwald that seem to fit the bill. Although my journey and learnings so far have certainly been worth the £24.80 I paid, the journey really is only just beginning…but for now, my study is framed in a rather nice gilt frame given to me for nothing by my framer, hanging on my wall. And I’m very happy with it.

If you know more about Helen Grunwald, or her murals for the chapel at 32 Welbeck Street in London, please contact me by clicking here.