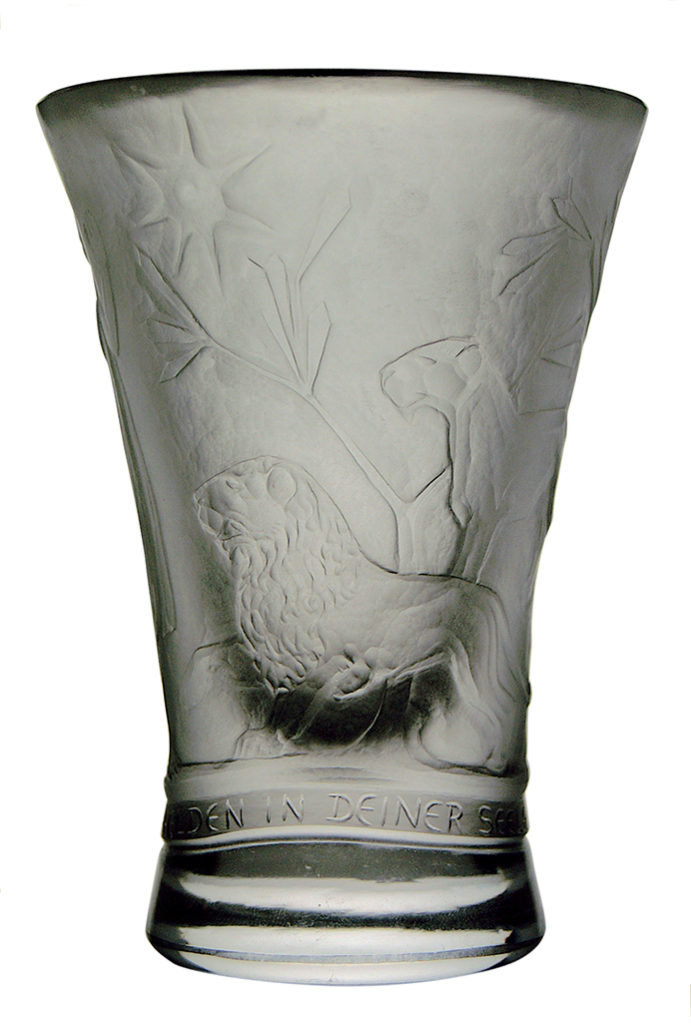 I’m a great fan of the Glass Fair at Knebworth and The National Glass Fair, and have been a regular visitor (and buyer!) since it was based in Cambridge years ago. They promise over 300 years in glass in one day, and they and the dealers who attend have always delivered it too. It’s the sheer variety available – there truly is something for everyone. I’m always on the look out for pieces that are unusual, rare and of a certain quality and I certainly found something that fulfills all those aspects last time.
It was the small size of 5in (12cm) and finish that first caught my eye. 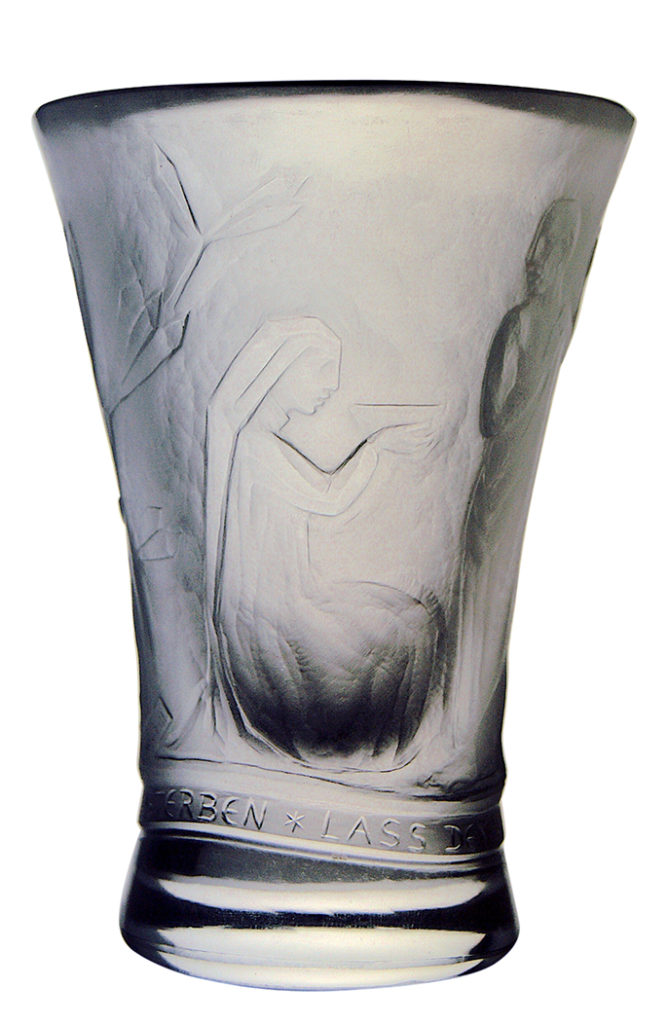 The matte finish caught the light, and it almost glowed white. Looking closer, the finely-worked detail provided a feast for the eyes and for the mind. The pleasingly proportioned body is carved and engraved nearly all over with frieze of a man, a kneeling woman holding a bowl, two lions and a tree. 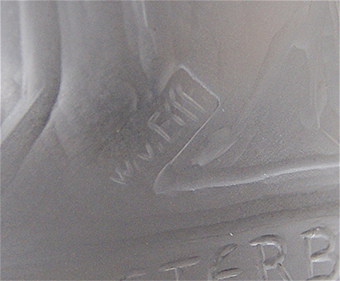 The style perfectly combines the Antique with Art Deco – it’s a little gem! A banner around the foot reads ‘LASS DEN HELDEN IN DEINER SEELE  NICHT STERBEN’ and the base is engraved ‘DEM JUNGEN Dr. DER ALTE Dr.’. Although my German is passable, I wasn’t exactly sure what it meant. What I did know was that I was intrigued, and that there’d be a story behind it. And then I noticed the signature – a teeny, tiny ‘w.v.Eiff’, and the deal was done. 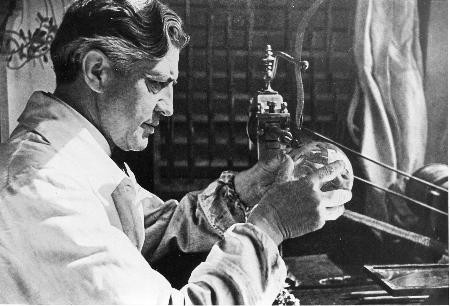 Wilhelm von Eiff (1890-1943) was a celebrated German glass engraver and painter who is considered to be one of the most important, leading engravers of the interwar period. He studied glass engraving at German glass, tableware and metalware company WMF (Württembergische Metallwarenfabrik) for four years, before studying painting and life drawing at the École des Beaux Arts in Paris, the University of Applied Arts in Vienna, and the School of Applied Arts in Stuttgart. Following military service, he founded his own glass engraving studio in 1919, employing and teaching many skilled and talented cutters, some of whom went on to become widely known independently. From 1921-1943, he was a lecturer in glass and gemstone cutting at the School of Applied Arts in Stuttgart, and he was a member of the Deutscher Werkbund from 1928-32. In 1928, he was one of the first members of the German Glass Society, and he also won a Grand Prix at the International Exposition in Paris in 1937. 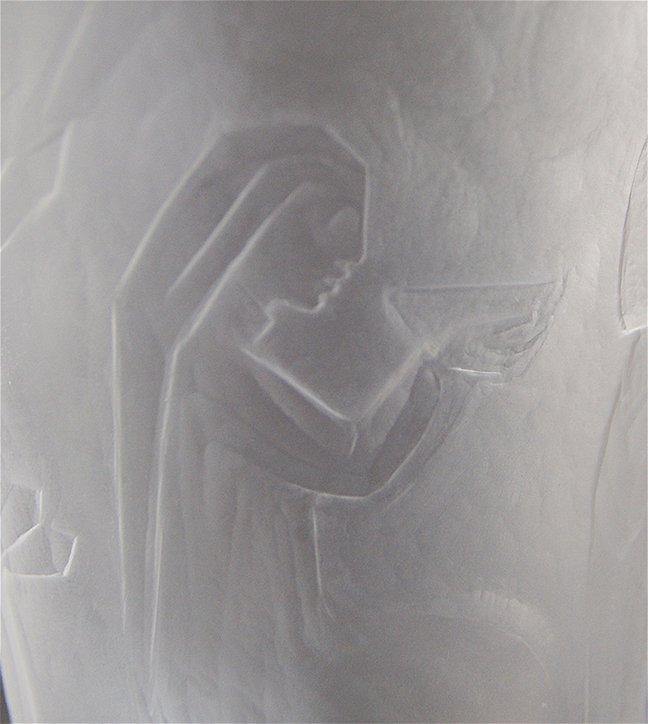 Suprisingly, given his skill and experience and the quality of his work, he is less well-known today, particularly outside Germany. He left few paintings, but a large quantity of glass, much of which is commemorative in nature, having been made to special commissions to individuals. A monograph, which is almost a catalogue raisonnée, called Glas ist der Erde Stolz und Glück (Glass is the Pride & Luck of Earth), was published in German by the Freibourg Museum in 1989 and that was my first stop.
Amazing! Not only is it a treasure trove of von Eiff’s designs, but my beaker was featured – and, unusually, with three images!

The accompanying text reveals that the beaker was commissioned by Dr Hans Ströhmer as a gift to his nephew Dr Friedrich Carl Hardt for receiving his doctor’s qualification on 5th August 1932.
This explains the engraving on the base which translates ‘FOR THE YOUNG Dr. FROM THE OLD Dr.’. The wording on the banner around the foot translates as ‘DON’T LET THE HERO IN YOUR SOUL DIE‘, and was presumably a message of support for the young doctor’s coming medical career, and the troubles and challenges that it would no doubt bring to his life and thoughts.

That sentiment is backed up by the iconography in the carved and engraved design. The standing man gesticulates towards a lion and lioness, which indicate courage, and looks down towards a kneeling woman with a begging bowl or dish for sacrifices, indicating need. The nearby tree perhaps refers to becoming a strong and sturdy tree, along the lines of the popular sayings about small acorns and mighty oaks. The book also states that this piece was both designed and cut by von Eiff himself, rather than being executed by a member of his studio. 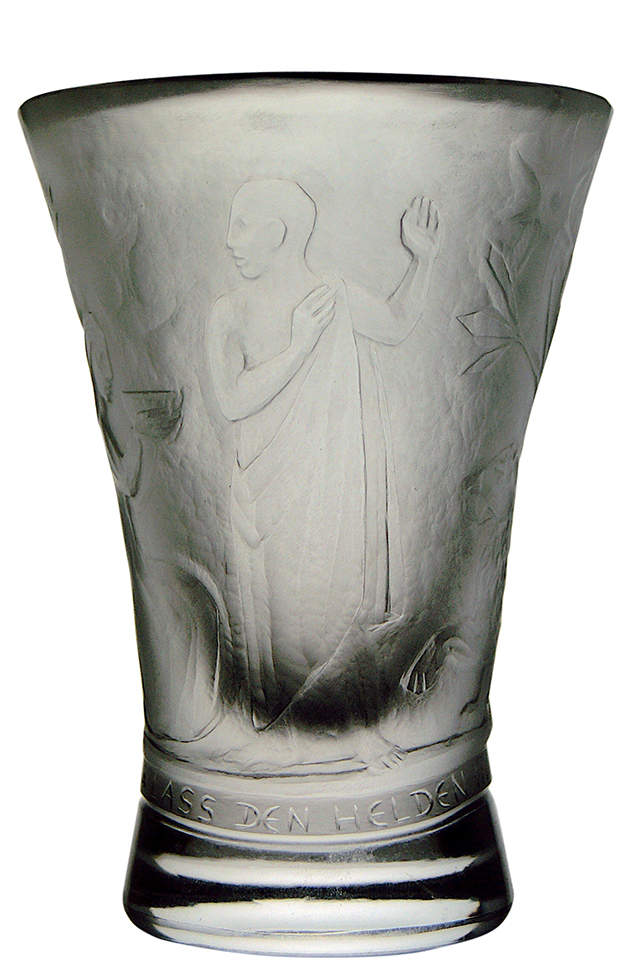 This choice of wording and subject is interesting. It predates by 35 years Ayn Rand‘s similar, more famous statement in her 1957 book Atlas Shrugged, “Do not let the hero in your soul perish, in lonely frustration, for the life you deserved but have never been able to reach. The world you desire can be won…it exists..it is real..it is possible…it’s yours“. Other phrases based around the same sentiment have sprung up since then, mainly as it’s so universal –  find the courage to keep on doing good things and don’t give up, even if the going gets tough. Appropriate, given the unwise choice the country has made today with ‘Brexit‘.
I had bought this beaker to sell on. The Art Deco meets Antique style is appealing and commercial, the quality of the work and the level of detail are excellent, and it’s by a notable (if currently under-rated), name. But I don’t think I will, at least not right now.