I’m a big believer in synchronicity – if you come across something three times, then it’s worth paying attention to. When our Art Director came over this morning to ask me if I had come across Munny dolls and a shop called Kid Robot, that was strike three. I first came across these cult toys around 5 or 6 years ago, when I stumbled across the above-named shop on a walk through Haight Ashbury in San Francisco. I was hooked! Colourful, cool and collectable. I came away with a small badge, and a rather fantabulous tripod roboty-type thing by a Japanese designer, who had also signed the box. 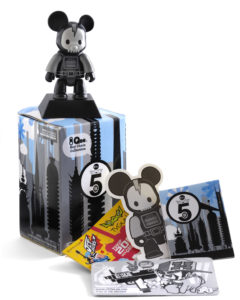 A year or so later, I stumbled across the British version of Kid Robot, a place in Soho called Play Lounge. No, despite its name and location, it’s not what you’re thinking! That time I came away with a few amusing Christmas stocking fillers for my sister and her artist fiancé, plus the odd present for myself. You can see one of them here – a Qee. These diminuitive ‘designer toys’ were developed by Toy2R, a Hong Kong based company founded in 1995. Released in distinct series since then, costing about £6 and measuring just over 2in high, they come in a huge variety of different decorative patterns. You can see these illustrated down the side of each box. It’s luck of the draw as to which one you get as the contents are securely sealed and hidden inside. Fun if you’re an adult, but not so much fun if you have an 8 year old daughter who wants ‘THAT one…‘, as our Art Director was telling me this morning! Mine is called ‘BearBear Q’ and was designed as part of the ‘Series 5B Designer Collection’ by 123KLAN in 2005. It comes with a stand, keyring attachment and plenty of other bumph including a sticker.
Developed by Kid Robot, Munnies are similar in form, but quite different. Here, the onus is on you to provide the design and decoration as they come blank. And plenty have taken up the challenge, with a number of leading contemporary and street artists, as well as a talented amateurs, giving them colourful and cool make-overs. So, each one effectively becomes a unique contemporary artwork. My artist brother-in-law (they married recently) loves them, particularly the larger sizes like the one I squeezed into his Christmas stocking a few years ago.
And there’s plenty more to choose from – these are just two examples. Judging from most of the prices and the types you see in a shop, these designer toys seem to be aimed squarely at adults (kidults?), or teenagers at the youngest. They may look cute from far off, but many have rather sinister or warped aspects when you look properly. Frank Kozik’s cigarette-smoking ‘Smorkin Labbit‘ is a gentle example.
I’m usually VERY wary of things that are produced to be a ‘collectable’, especially those that are released in supposedly limited editions. Take anything advertised in the back of Sunday newspaper magazines by companies whose names include the word ‘Mint’, for example. They’re either a fad, or turn out to fall dramatically in desirability and value almost immediately – or both. But these seem to be different. Their fan base may be mature already, and they may only be a whimsical bit of fun, but I think there’s something there. They have global appeal, with collectors in Japan, Europe and the US crying out for the latest or rarest creations from both the companies and the artists who decorate their products. This unquenchable hunger is further fed by the fact that many of the characters also appear in cult animated films or comic books. There are even books on the subject, such as ‘I Am Plastic: The Designer Toy Revolution‘, which make fascinating reading. Prices vary wildly from £1-1,000+ depending on the character, the date, size, series and decoration, even though I’m told that the secondary market isn’t really organised or stratified yet. It seems to be quite a weird, but wonderful, world.
So, I guess I ought to trust both my hunch and synchronicity and do something about them now. I don’t have enough space at home to start collecting them, but I might try and find a keen collector who wouldn’t mind me photographing his or her collection for the next edition of Miller’s Collectables Price Guide & Handbook. I really want to learn more. If you know of anyone suitable, or if you think I’m barking mad or even barking up the right tree, please let me know by clicking here.