I sped out of the church, where I had been to a very charming and delightful, if a little long, christening and Sunday church service. Rushing right, right again, and then north up to Arkonaplatz in the heart of Berlin’s trendy Mitte district. 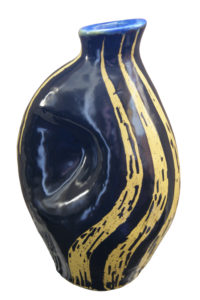 I’ve been here before, and there are many larger better flea markets in town, but with only an hour to go before I met the other guests for a delicious lunch after their walk, I needed somewhere small, nearby and with a good potential hit rate. It really isn’t that big, with three aisles of around 20 stalls, plus a rather untidy agglomeration of stands at the bottom. But, under the autumnal trees, it is pretty – and it’s very busy too.
It’s well worth looking out for the lady who sells German postwar glass. Her stand is pretty sparse by lunchtime as her prices are very low in my opinion. And clearly in others’ opinions too, given she starts the day with a laden table. There are also some good stands at the bottom the first aisle on the left, past the stands selling old toys, and trainers and clothing that are more ‘old’ than ‘vintage’.
What did I find? Well, amongst others, this fab jug vase. At first glance I thought it may be Italian, but the yellow and black stripes recalled Schmider’s ‘Tigris’ design, produced by Anneliese Beckh in 1956. The curving form was also certainly typical of that decade. Picking it up revealed not only its carry-on luggage unfriendly weight, courtesy of being very thickly moulded, but also the ‘Buchtal’ mark below. Not a company I recognised, but at 11.25in (28.5cm) high, it was a stonker of a piece. 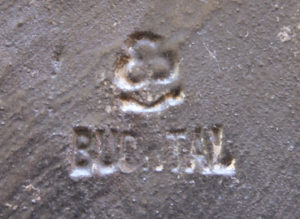 Rather surprisingly, the company was founded on the eve of WWII in 1939. Despite this, Buchtal is still in business, primarily producing ceramic tiles. Interestingly, they also own the Jasba name today. A quick look in ‘Keramik der 50er Jahre’, Dr Horst Makus’ invaluable bible of 1950s West German ceramics, reveals all to readers of high German (not including me) – plus a picture of this very design, which was produced by Theo Rathgeber (1917-2000). Looking closely, it appears to have been decorated using a form of resist with the glazes, which would make each piece unique, just as if it had been hand-painted. And what did this mid-century modern marvel cost me? The starting price was €17, but we agreed on €15. A bargain.