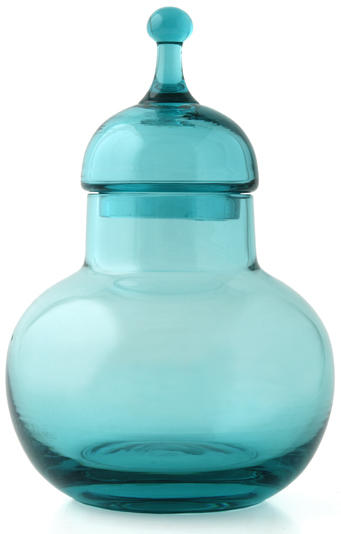 Just because something is rare, it doesn’t have to be expensive. High values come from a mercurial combination of condition, age, rarity and the ever-present law of supply and demand. So I was delighted to stumble across this curvaceous Dartington storage jar for £22 at last week’s National Glass Fair in Birmingham.
It was designed in 1967 by Frank Thrower, co-founder and sole designer at Dartington Glass until his untimely death in 1987. It’s shown in the very first, hand-drawn catalogue, and is numbered FT18. Dartington numbers were applied to shapes consecutively, which helps to date them to a period or, in the early years, often a year.
Frank was inspired by Scandinavian glass of the 1950s & 60s, but also took some inspiration from 18th and 19th century glass and other, highly diverse forms and themes. Part of his brilliance lay in knowing what the market wanted, what it would pay, and taking all these inspirations and combining them with a quirky British twist.
But not everything worked or proved popular, and it’s often those that didn’t that are sought-after today. This ‘Covered Jar’ is a good example, as it somehow fell through the gaps at the time. It didn’t really work as a storage jar in the kitchen, and ladies didn’t accept it as a powder box or similar on a dressing table. Some were undoubtedly used decoratively on sideboards, but not many. It also wasn’t an impulse purchase at 49/6 – about £30 today. I also presume that a fair few of them must have been damaged over time, particularly the rims or lid, and so thrown away. The characteristic knop finial also appeared on a similarly rare spherical ‘Oil Bottle’ and a low, squat ‘Covered Bowl’, all of which were produced in Clear, Kingfisher (here), or Midnight (grey).
A further favourite benefit of fairs like these is the social side, so I was delighted to bump into my friend Peter Robinson. Peter helped me with my book on Dartington Glass, and is an ardent collector and expert himself. He was also the Sales Director at Dartington when this was being sold, so was the perfect person to ask. He agreed with my thoughts, but also recalled that the design “…must have sold okay otherwise, being rather difficult to make, it would have been withdrawn.” Interesting stuff, particularly that it was difficult to make, which is a factor we often forget about today.
So, I’m delighted with my jar. The colour shouts both Dartington and the period, and the curving form is balanced, decorative and highly appealing. It’s also super rare and has an interesting story behind it. As for my £22, I couldn’t get my money out quick enough – when found, they’ve sold for up to three times more in the past!