Having spent an entire day the previous week at the vast and awesome National Museum of Anthropology in Mexico City, I was keen to find out more about Mayan ceramics. To be honest, I was actually more keen to own a bit as I always prefer that when looking into an area. Although my knowledge of such pre-Columbian things is very limited, I know enough to know that the market is flooded with fakes, and original pieces are hard-to-find and good bits are typically very expensive. 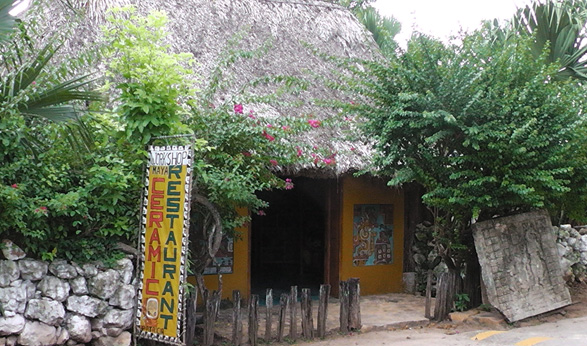 The more I looked, the more I thought I’d go for a good reproduction, almost in similar way to the ‘really rather good’ fake antique ceramics I bought in China. But where to go? I didn’t want to go for the higher-end, but still mass-produced, pieces sold in museum gift shops, even if they were in ‘limited editions’, so I decided to support today’s independent craftsmen and get my ‘fix’ that way. 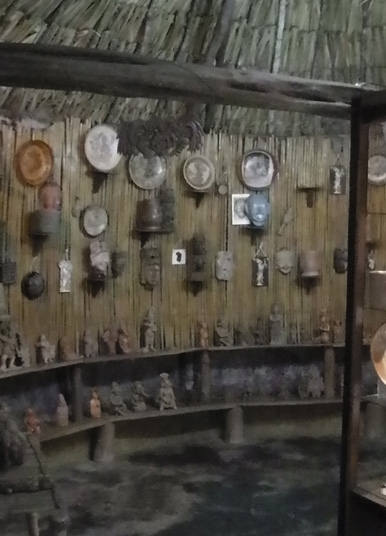 Asking around and flicking through guide books told me that the town of Ticul is known for it excellent reproduction Mayan pottery, as well as many innovative, new designs. All are made using traditional Mayan techniques and processes. Although we were on our way from Merida to the ruins at Uxmal, Ticul was a little off our route (over 100km off our route!) and I was told that much of the pieces I might want would be VERY expensive! A little more internet and guide book smaller town called Muna seemed to offer the solution – a tiny, family run pottery called Los Ceibos (above).
Today the pottery is run by Patricia Martín Morales (below), who is almost as legendary as her brother Rodrigo. She works with her daughters in a traditionally built straw and wood hut behind the main showroom, which is housed in a similar hut. The place isn’t easy to find, and signposts in Mexico are generally not as common as one would like – particularly when driving! First, aim to find the petrol station in the middle of the town on a long, wide square. Stop for petrol (if you need to) and turn left, go over a couple of speed bumps, and turn down the sixth street on the left after the petrol station. That’s Calle 13, which wasn’t signposted when we went. The pottery (above) is halfway down the road on the left, with space for parking under a shady tree on the right. 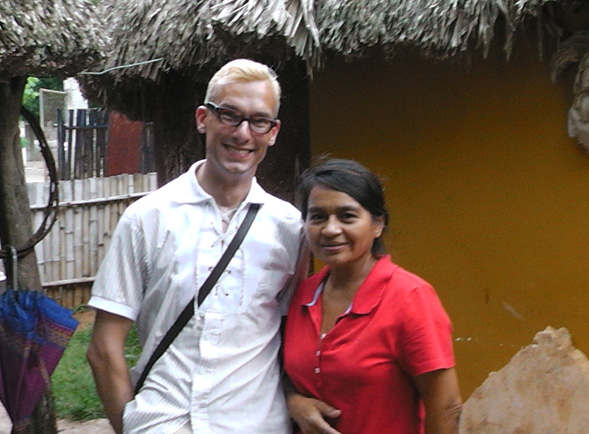 You walk into a dark room, which acts as the main showroom (above right). the walls are lined with functional, ritual and sculptural ceramics in traditional, ancient Mayan styles. Colours are authentic, as is the semi-gloss finish that is gained by rubbing (burnishing) the finished surface with pebbles until it starts to shine. There are plenty of reference works on shelves (always a good sign) which Patricia uses regularly as inspiration or to copy patterns from. 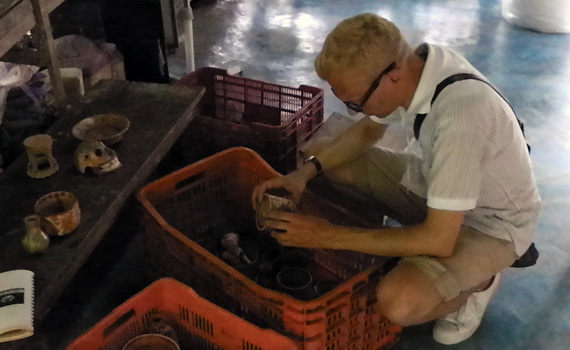 Outside the back of the showroom is another hut with an open front. This is the centre of operations, where the pots are made and decorated by Patricia, her husband, and two young girls. Apart from the plastic boxes, it’s like stepping into a time warp. I enjoyed that, until I noticed the Blackberry phones sitting amidst the coloured glazes and lumps of raw clay! 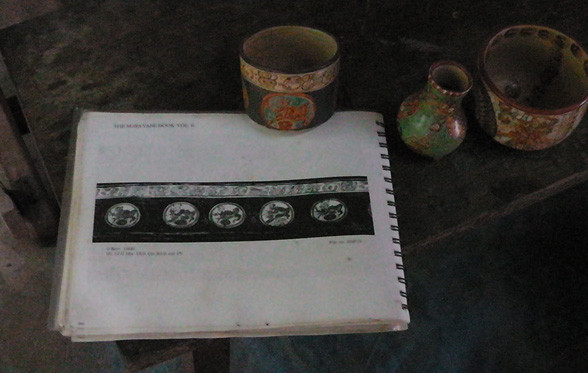 Despite the language barrier, Patricia was open and friendly, and was keen to show me her lastest work that was neatly stacked in the crates. She showed me some of the more complex, larger and expensive pieces, and also some at the lower end by comparison. Everything is made by hand, using ancient Mayan techniques and colours. The selection was vast, ranging from statues to cylindrical vases, dishes, bowls, cups and chargers, I selected a few pieces I liked (above right), only to find that nearly all were all ‘vendida‘, so had been sold already. Patricia seems to produce for both collectors and for retailers too. 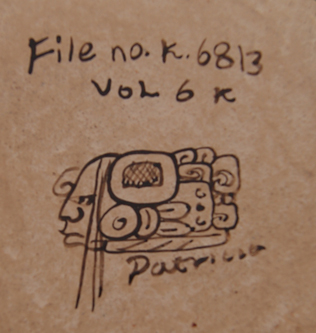 The one that was left I decided to ask a little more about. Patricia showed me that the design was copied from a book containing original Mayan designs. To reflect this, Patricia signed the base with her motif (right), and with a number relating to this reference. For those who want to know, the book was volume 6 of ‘The Maya Vase Book’,  by Justin Kerr (above). I wanted to learn more, but the language barrier made that impossible. 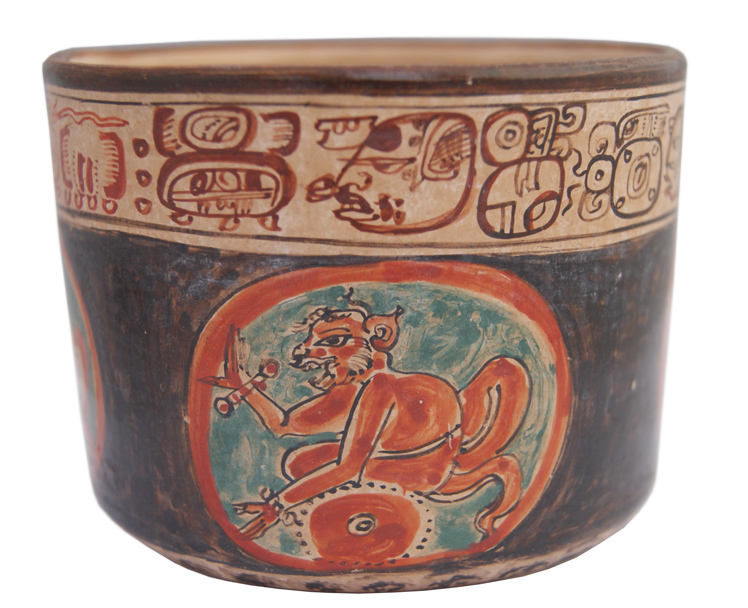 Nothing has a price tag on it, which is always a worrying sign. I asked how much my bowl (left) would cost, and the answer was 700 Mexican pesos – so about £35. A bargain for a unique, hand-crafted item, I thought! I asked about a couple of other slightly larger pieces for good measure, and they all seemed to be around 900 pesos (£45), but prices rose to a couple of thousand pesos for the larger and more complexly decorated examples. Considering I was speaking to the artist herself, I thought it rude and wrong to barter for one small piece, especially after she had been so helpful and friendly.
If you’ve made a special journey to Muna, as well as filling up on petrol/gas/diesel, you can fill yourself up as there’s a really great restaurant behind the studio along a beautiful, tree-lined pathway. We ate very well, topping off a superbly enjoyable visit perfectly. 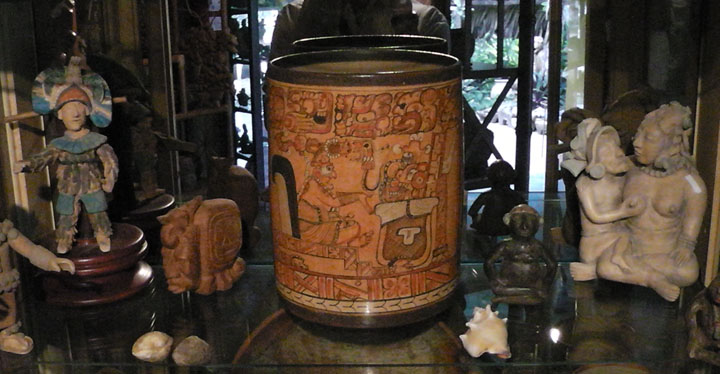