One of the great pleasures in life is browsing a secondhand bookshop. That joy of coming across a book that you didn’t even know existed, and that raises a smile or piques an interest can’t be matched. The experience can’t be replicated with eBooks either. 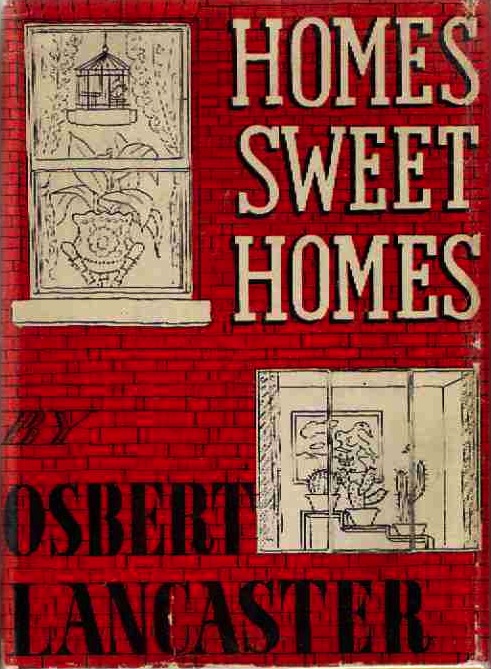 One of my favourite places to browse is Judd Books, on Marchmont St in Bloomsbury, London, as it is always packed-to the gunnels with fascinating titles new and old. Last time I was there I picked up a copy of Tanya Harrod’s landmark book on 20thC crafts in Britain, and this time I found a curious little book from 1948 called Homes Sweet Homes by Osbert Lancaster. Apart from the jaunty cover, anything written by someone called Osbert has got to be read, hasn’t it?
First published by John Murray in 1939, it covers 34 different styles of interior design throughout history, from Norman to Functional via Tudor, Early Victorian, Greenery Yallery, Edwardian, and Cultured Cottage. Each style is detailed with a few humourous, often acerbic, paragraphs of text and a simple yet piquant cartoon. 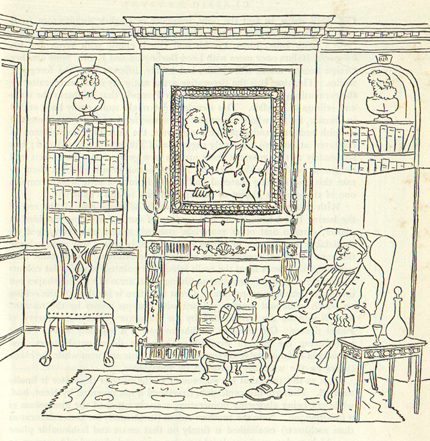 Sir Osbert Lancaster (1908-86) was a cartoonist best known for his strips for the Daily Express. Educated at Charterhouse and Oxford, he was close to Sir John Betjeman, worked with John Piper on the Festival of Britain, and illustrated many books including Noblesse Oblige by Nancy Mitford. Firmly upper middle class, it has been suggested that he envied the upper classes, and his obituary in the Times described him as “The most polite and unsplenetic of cartoonists, he was never a crusader, remaining always a witty, civilized critic with a profound understanding of the vagaries of human nature.” Over 40 years, he produced some 10,000 cartoons and pioneered the single cartoon panel covering a topical news subject of the day. In 2008, the Wallace Collection in London held an exhibition of his work, and you can read a review of it and him by clicking here.
Lancaster’s often verbose text in Homes Sweet Homes is witty and amusing, and extremely old-fashioned British at its core. Sort of Terry-Thomas meets Wallpaper* meets theatre critic. It’s to be enjoyed with a glass of red wine on a leather armchair by the fire, like the gouty Georgian above. Or to be left in the loo to amuse guests. I found two aspects particularly interesting because the book was written during the late 1930s – his detailed dissection of Victorian styles, and the way he handles the dominant style movements from the 1880s onwards, including Modernism and Art Deco. 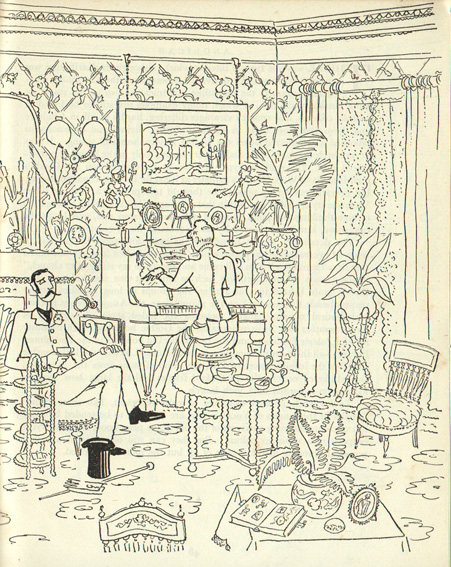 There are numerous tightly-observed chapters on the Victorian period, and this is undoubtedly due to the fact that they were written when the styles of the era were still within ‘living memory’. The Mid-Victorian period of the 1870s-80s (left) was, at the time, only 50-60 years before – so just like the 1950s and 1960s are to us today.
As a result, he’s able to carve up Victorian interiors into individual styles with different influences, and bring them to life. Even so, interiors are typically thick with patterned wallpapers, oil paintings and prints, rugs and embroideries, deep upholstery and curtains, and a mixture of styles from exotic to historic. From indulgent comfort, to a display of success, wealth and travel, and an adherence to changing fashions, all the trappings so beloved of the burgeoning middle classes (even today) are there.
And then on to style movements, where his handling is very different to that of many design gurus, books and TV programmes. Perhaps reflecting popular tastes and opinions of the 1930s, Lancaster was not a fan of the “nightmare” Art Nouveau style, which receives only one chapter dripping with witty bile. It’s lucky though, Arts & Crafts is mentioned a few times but doesn’t even receive a chapter. Lancaster even claimed that godfather of the movement William Morris was only worth remembering for a few of his wallpapers! 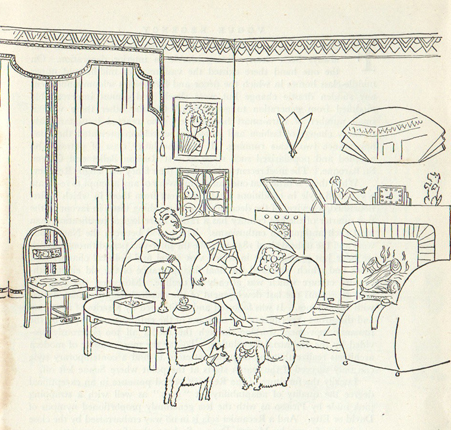 After the watered down Victorianism of the Edwardian chapter, the 1920s-30s are far from the clean-lined, chrome machine Age of Art Deco that some would lead us to believe they were. Lancaster should know – he lived and wrote the book through them. Just because today’s market favours Art Deco and Modernist furniture and decorative wares, it doesn’t mean that everyone lived like that – in fact, comparatively few did. Out of 11 chapters for the post-Edwardian period, four cover styles considered modern, six cover styles that are anything but, and one is a (recurring) joke based on the outbreak of war (the book was written in 1939, remember).
The most recognisable Art Deco styles are a heavily Oriental look peopled by French aesthetes inspired by the Ballets Russes, and a ‘Modernistic’ suburban living room in a 1930s semi-detached filled with angular Art Deco furniture simplified for mass-production (above). The first flats in modern apartment blocks are shown as a series of boxes delineated by paper-thin walls and filled with simple, functional furniture. It’s not really presented as a style, more as an alternative and new way of living before the horrors of postwar local council-run tower blocks arrived. 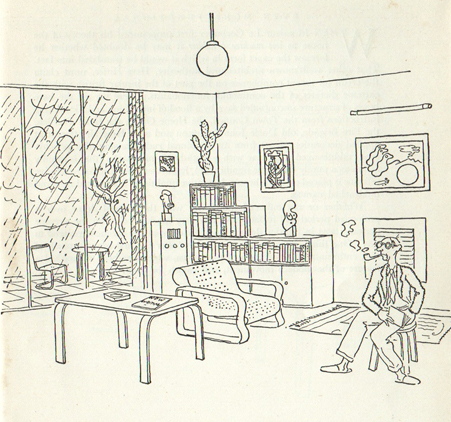 The only truly Modernist style appears in the penultimate and thus most contemporary chapter, called Functional (left). Here a Le Corbusier figure sits in an uncluttered environment with modern abstract art and laminated wood furniture including a chair designed in 1930 by Alvar Aalto, and another by Marcel Breuer outside. With the exception of the suburban living room and flat, the Functional look and the other ‘Modern’ styles are presented as out of the ordinary, the preserve of the wealthy or eccentric aesthete. What appears to be much more prevalent and widely desired in interior design of the 1920s-30s is a retrospective pastiche based on a cross between the Victorianism described above and an idealised country cottage. 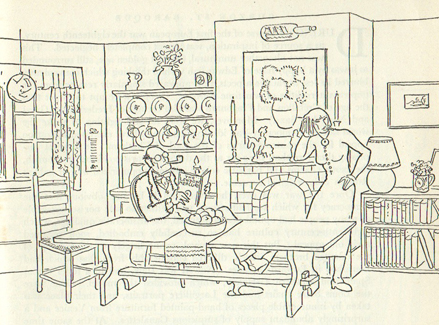 Rooms are filled with oak furniture loosely based on generic ‘antique’ styles, many with barley twist legs. There’s clutter from transfer-printed ceramics on dressers to tapestries and mantelpieces laden with vases and figurines. Hunting prints indicate the “squirearchy of Metroland” and there’s chintz-a-go-go. How very comfortable and how very twee. Lancaster’s names for these range from Ordinary Cottage to Cultured Cottage (above), and Aldwych Farcical to Stockbrokers’ Tudor (below). With the latter, that reminds me of the Chown houses I grew up around in Surrey, one finds “eighteenth-century four posters, Regency samplers, and Victorian chintzes all…regarded as Tudor by adoption.“. 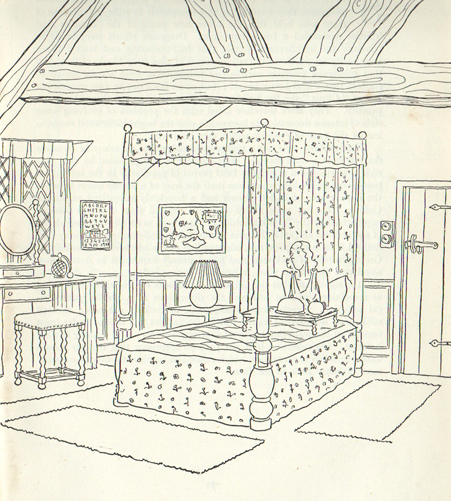 And he is right, of course. This pastiche look was the most popular, otherwise our suburban areas would be filled with white Modernist boxes, not rows of semi-detached houses with mock Tudor beams, gables, porches and front gates. Just think of the vast quantities of dull oak furniture, pressed glass and cheaply made transfer-printed tableware and other ceramics that haunt auction rooms and gather dust in antique centres up and down the country. Yes, the stuff nobody wants for a tenner as it’s not stylish, even though it does represent excellent value being strong and sturdy and made from solid wood.
For me, my chance-found book is a good reminder of the power of the reappraisal of styles, and the importance of returning to period texts for period opinion. Not every home across the world adopted the various ‘new’ styles of Arts & Crafts, Art Nouveau, Art Deco, and Modernism as they came – mainly as few could afford to. Instead of being slaves to style, most people built up interiors to suit themselves, with comfort, cost and convenience in mind, just like today. Morever, a trusted old style can be nostalgic, warm and welcoming. Similarly, my book may be old but in many instances, old is best.

All images copyright of the Estate of Sir Osbert Lancaster.