When an artist or designer dies, or a factory or studio closes, it causes ripples to go through the collecting world and the fairs, shops and auctions of the ‘secondary market’. A form of hysteria often sets in, causing prices to rise rapidly before, as often happens, they crash back down again.It can take some years before these circumstances happen, as with the Whitefriars market which peaked some 20-25 years after the factory closed in 1980. But the effects are usually felt immediately, and the cycle seems to be getting faster and faster. Some have seen these events as investment opportunities – but what do you buy to fare the best? The subject almost doesn’t matter, so I’ll use the most recent time I’ve experienced this. 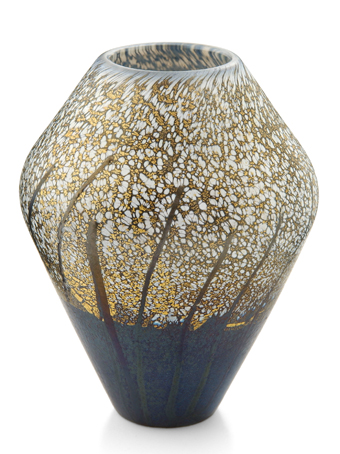 In January 2013, Isle of Wight Studio Glass closed in the year of its 40th anniversary, having been founded in 1973. Presumably the struggle to balance the rising cost of keeping the furnaces burning all year round against the average spend of tourists and competition from cheaper and poorer quality Far Eastern and Eastern European glass just couldn’t be continued. Michael Harris’ unique designs for the factory have risen hugely in value since 2005. Prices ranged from £10 or so for a simple and common novelty fruit to over £1,500 for a piece from a scarce range signed by Michael Harris. Most pieces fell into the £60-500 range but, ten years before, even the very best would have struggled to exceed £100. This rise was driven, as ever, by the release of new information and a re-appraisal of the designer’s importance to the wider history of the area. In this instance, it was a book I wrote and published, which is now out of print.

Prices had begun to plateau after 2010 as the market stagnated and the recession bit. Few new collectors joined the market, and many existing ones had examples from the ranges they liked and wanted. Some collectors moved on to collect something else as they couldn’t find anything to appease their appetites – collectors need to collect. As a result, common pieces of the award-winning ‘Azurene’ or largely unfashionable ‘Tortoiseshell’ ranges were selling for stupidly small sums, and it took something super-rare, like the ‘Golden Rain’ vase shown above, to see the high values being paid around 2009.

But now the closure of the factory seems to have caused a resurgence. It’s just as well, as the company’s archive was sold as part of the voluntary liquidation process, flooding the market with new stock. Diehard collectors have been satiated, and a large number of new collectors have an unparalleled variety of stock to choose from. If these new collectors continue to collect this appealing glass, and only a few move on and sell their collections as they go, things should bob along nicely and grow over a period of time as demand exceeds the finite supply. And this looks set to happen to Michael Harris’ designs, in my opinion – they’re here to stay. But what to do to have the best chance for future rises if you only wish to dip your toe in the water? 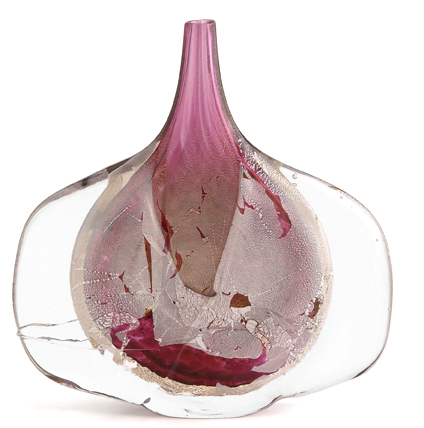 In my opinion, go for large and visually impressive pieces that it’s easy for almost anyone to love, and for good examples from rare ranges that will always appeal to collectors – such as the ‘Azurene Pink’ Fish signed by Harris shown here. Unless you want to get properly involved and build up a full, representative collection, both types may prove to be the strongest bet for the future at a time when the antiques and collecting market is in a state of flux. As well as hopefully returning a profit, they’ll also be both interesting and attractive in the meantime, which is more than you can say for bonds or indeed money in the bank.

First published on IACF.co.uk, the organisers of the largest antiques fairs in the UK at Newark, Swinderby, Ardlingly and other locations across the nation.