It didn’t look promising. I suppose I should known – after all, it was a British bank holiday. As we were also briefly caught in between workloads, the banker and I decided to escape to Mediterranean sun and warmth in Madrid. Having never been before, I also welcomed the chance to explore the antiques and collectables market in a new city.
It seems that in Spain, antiques tend to be exactly that – 19th century and before – so most shops were of little interest to me. Guidebooks showed that the centre of the Madrilene collectables and flea market world occurred on a Sunday morning, in the ‘Rastro’ part of southern Madrid. 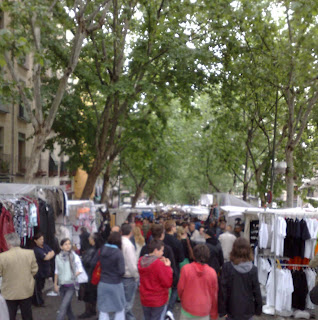 The area got its name from the fact that, from the 16th-19th centuries, the streets contained slaughterhouses. When a dead animal was dragged off by a tanner, it left a rastro, or trail of blood, behind it. Grizzly. Today, the only thing I hoped to be dragging off down the road was a huge bag of bargains!
We arrived at 9am, as the guidebook suggested, as we didn’t want to miss out. Madrid is certainly more relaxed many other cities, and you quickly learn to go with the flow. Unlike most fairs, when we arrived many stallholders were still setting up, and some were yet to arrive. After a strong coffee to stifle the yawns from barely three hours of sleep (the city also knows how to party!), we wandered on.
To be honest, 95% of this ‘legendary’ flea market is dominated by cheap, imported electronics, household goods and questionable clothes. It’s pretty bad. If you go, don’t bother with the main street, Calle Ribera de Curtidores, unless that’s what you want to buy. We found that wandering off down the side streets to the east of that road, into the triangle made by Calle de Toledo and the main road to the south, was much better. Here you’ll find street sellers with rugs spread out and displaying everything from auntie’s precious porcelain to the old kitchen sink. Shops also move from the ‘antique’ to the ‘junktique’, and offer far more potential. 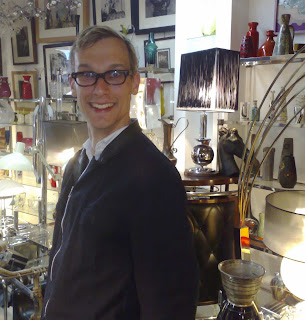 After a few hours of searching, we found Madrid was hardly a hot-spot for 20th century design – particularly at affordable prices. We only found a few good shops, such as ‘El 8’ on Mira el Río Alta, which has a colourful and varied stock ranging from furniture to glass, ceramics, and even stylish airplane models. A nameless shop around the corner to the north offered even more excitement, including a pair of great (but sadly badly broken and restored) vases which you can see me weighing up in the picture below. There were a couple of others, including some spotted on walks in other areas of the city, but they weren’t quite as good or well-stocked.
So, did I find and buy anything to further clog up Hill Towers? I found plenty, but the prices were pretty high, even after lengthy negotiation, and you know how I like a bargain! 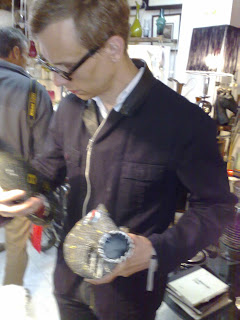 So, I bought nothing. Perhaps entirely fairly, their values seemed to be largely based on what something should be worth, as indicated by its visual appeal and design aesthetic, and what each thought they could get for it as one of only a few 20th century design outlets in the city.
Despite the lack of success on the buying front, we both had fantastic fun this sunny Sunday morning. As the city, its culture and people reminded me, there’s so much more to life than just collecting. And my bag was lighter than usual on the way home!