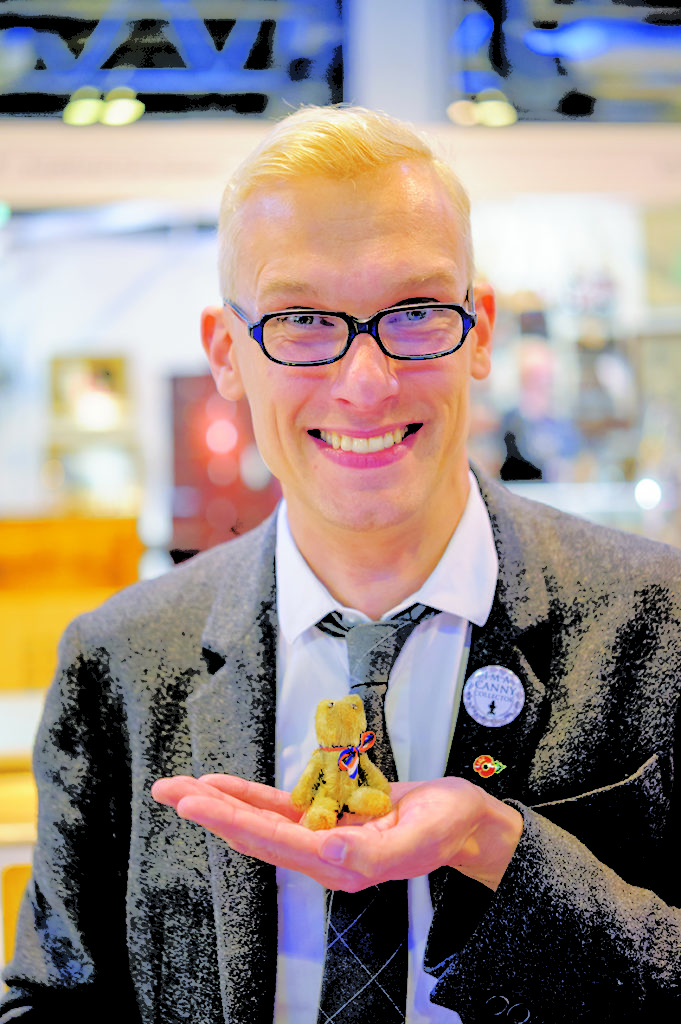 Sometimes it takes the smallest of things to help children begin to understand a complex situation. In this instance, it was a small teddy bear.
During World War One, Farnell (known as the ‘English Steiff’ by collectors) produced tiny 3.5in high bears which they called ‘Mascot Bears’. They were given as gifts and taken to the Front by soldiers, as mementos of home and loved ones as they endured the trenches and the terrors of war. A staggering quarter of a million soldiers were under 19 years old, the average age of a soldier was 24, and the average life expectancy in the trenches was only six weeks.
I was first captivated by these tiny teddies after helping to sell the amazing Campbell Collection in 1999, when I worked at Sotheby’s, but it took me another 14 years to actually buy one for myself (above right). In 2014, the centenary of the start of World War One, I wrote an article about Mascot Bears for Homes & Antiques magazine, that appeared in their July issue. They’ve very kindly allowed me to have a copy of that article, which you can download for free and read by clicking the link below. 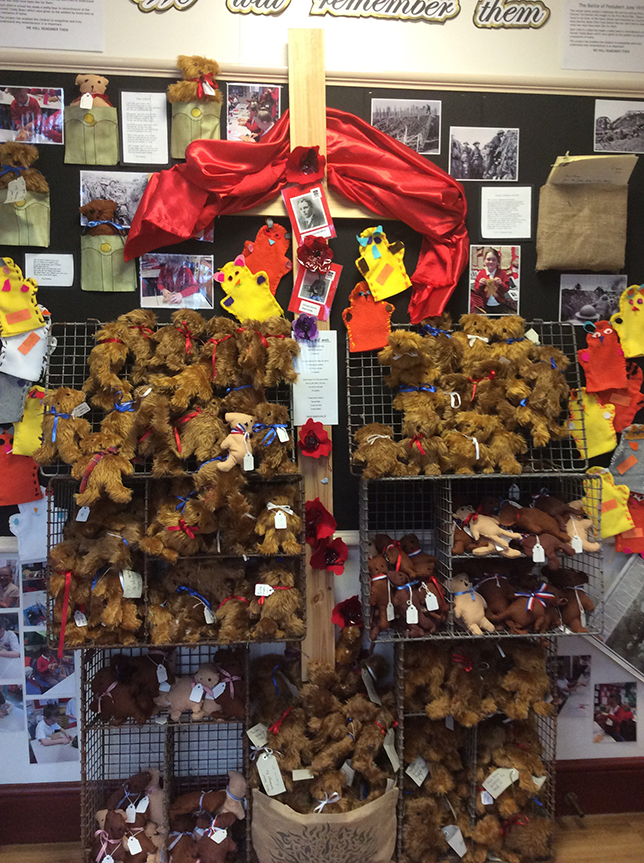 One of the people who read my article is the Deputy Headteacher at St Peter’s C.E. Primary School school in Chorley, Lancashire. She was as captivated by these bears as I was, and was inspired to use them to help teach her schoolchildren about the Great War and, in particular, the Chorley Pals from Lancashire who made the ultimate sacrifice for their country. I wonder how many of the Pals were accompanied and even comforted by one of these diminuitive friends?
She asked each of her children to make a small bear, and over 300 of them were presented together in the display shown here, under a ‘We Will Remember Them’ banner. What better way to touch a child’s heart and mind, and encourage empathy and emotion, than with a teddy? What a superb idea she had.
Her idea spread, and 12 other primary and secondary schools across Lancashire took part, producing hundreds, if not thousands, of bears to commemorate soldiers who left their families to go to war, many never to return. All inspired by Farnell’s original mascot bears. The displays were then exhibited at Astley Hall in Chorley in memory of the Chorley Pals.

It’s for reasons such as this that I suggested Farnell’s ‘Mascot Bears’ as one of the ‘100 Best Antiques‘ in Homes & Antiques magazine’s feature in their current September 2016 issue. It’s hard to relate emotionally to black-and-white photographs of wars, but a teddy bear holds a special place in our hearts. Imagine them tucked into the breast pockets of soldiers as they went over the top. The bear I now own came back, and proudly wears a Victory ribbon, but how many didn’t? Holding him in my hand is very special.

With thanks to the Deputy Headteacher, Homes & Antiques magazine, and Jason Ingram.

Download the Homes & Antiques article by me on Farnell’s Mascot Bears by clicking here.