I can’t miss it, and nor should you. I’ve just got back from the Cambridge Glass Fair which was as marvellous as ever on its 16th outing. Held in the picturesque and pastoral Chilford Hall Vineyard, over 200 of the country’s great and good glass dealers gather to offer you over 300 years of collectable glass in one day. If you haven’t been before, check out their website, and click here to watch a YouTube video of a previous event and see what goes on.
Although there were slightly fewer visitors than normal, I noticed quality and variety was particularly high this time around. Wandering around the fair tweeting about what I found always makes me look especially closely. Paul Anderson, a relative newcomer compared to some, had some particularly interesting high quality and scarce Czech, Scandinavian and British glass – and all at reasonable prices. I don’t know where he finds it, but he certainly has a superb eye. 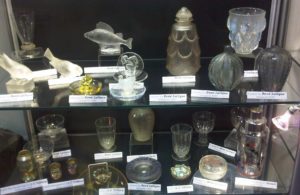 Mike & Debby Moir’s stand looked as strong as ever, being filled with their usual unbeatable and carefully curated selection of Lalique, Daum and Gallé (above). They represent one of the best aspects of this fair – there’s something wonderful for you to find from tens of pounds to thousands of pounds. And you’ll also always enjoy friendly, practical and informative help. Regulars Peter Elliott, Danny Walker, Michelle Guzy, Ron & Ann Wheeler, Nigel Benson are always worth checking out, and it was super to see Ian & Terri Ross here for the first time. The plethora of talented and hard-working contemporary glassmakers in the adjoining hall act as more than the icing on the cake. Go see.

Two particular items jumped out at me. The first (right) is often mistaken for having been made on Murano, and designed by Dino Martens. As such, it usually carries a large price tag commensurate with such a pioneering great. But it’s not so – the design was actually produced by Josef Hospodka for Czechoslovakia’s Chribska glassworks in the 1960s. They’re not at all common, and were complex and challenging to make. They also look great, and sum up so much of the design ethics of the day. Despite these factors, they usually sell for anything from £150-200 – but, believe me, like so much postwar Czech glass, this is one to watch. I think these should easily fetch twice that in time.

The second piece (left)was found by a lucky bargain hunter in a local charity shop the day before the fair. She thought she recognised the pattern, so brought it to the fair for identification and confirmation. And she was right! Designed by the legendary Geoffrey Baxter for Whitefriars in 1961, it was intended to be part of a new range launched at the Blackpool Gift Fair in 1962. However, the white trails would not adhere to the cobalt blue body during the production process, and the range had to be completely abandoned. As such, examples are hard to find today. Top that off with the fact that this is an appealing experimental form, and you have quite a rare thing. Found for an bargainous £6.50, I think its retail value is nearer £300-400! However, the ardent seller does need to leave a suitable margin for dealers to pay for their travelling, living and stand costs – they’re businesses, not charities. It just goes to show how luck and expertise combined can still have some great results. Oxbridge Fairs’ next glass fair is at the National Motorcycle Museum on 14th November – click here to find out more…….and see you there!