One of the great delights of the recent Fat Lava exhibition in Amsterdam (a blog entry is on its way) was putting faces to names of many fellow collectors who I’ve got to know over the years via email. Once such collector is Els van Petersen. Els and I first got in contact when I found a Dutch studio pottery vase with a paper label reading ‘van Woerden’, and put it in a Miller’s Collectables Price Guide. “Do you know anything about them?“, Els asked me by email. “Only a little bit…”, I replied. Els had a number of van Woerden pieces in her collection and, being intelligent and inquisitive like most collectors are, wanted to find out much more. Little did she know that the journey would take her to places as close as Monster and Gouda in the Netherlands, and as far away as Ontario in Canada!
Van Woerden was founded by Marius van Woerden (b.1942) in Monster, in 1964. He had gained experience working for a number of Dutch potteries including De Steenuil, Groeneveldt, Ravelli, and the notable Zaalberg. Instantly successful, Marius and his brother Hugo (b.1946) moved to larger premises in Gouda in 1965. As the business grew further, they moved into even larger premises in 1973. As much of their work was exported (particularly to Germany), they chose a new, simpler name for the company at this point – ‘Vest’ – after the street where the new pottery was located. Vest Keramiek operated until 1984, when Marius and his brother moved to Canada to start afresh with Castle Ceramics in Norwich, Ontario. Marius continued to pot, and also designed a number of resin ranges of novelty buildings for American companies before retiring in 1994.
The Dutch pottery is made from red clay, and is typically glazed in a creamy-coloured ‘bubbling’ lava glaze. Other colours for his lava glazes include browns, yellows, white, a muted blue, and an earthy red. Some more complex Chinese-style glossy reduction glazes were also produced, but these are scarcer. Forms comprise rectangular vases with holes, and quirkily shaped jug vases and vases. Apart from labels, pieces are rarely marked. Occasionally a piece may bear a letter and a number, printed in ink or written on the base, that relates to the shape, and sometimes Marius impressed his full name into the base. Values range from a few euros (if you’re lucky) at a Continental flea market to over €100 for the largest and best pieces. 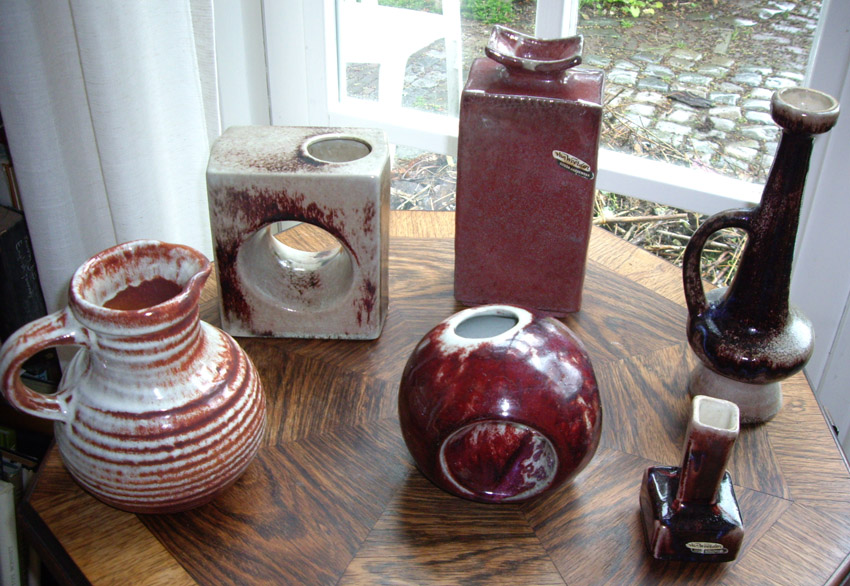 All of this information (and much more!) was uncovered by Els, together with my friend Conrad Biernacki of the Royal Ontario Museum, and was published in an article (below) for Canada’s leading ‘Antique & Collectiblers Trader’ magazine in December 2009. You can download a copy of the article from Marius van Woerden’s own site by clicking here and selecting the ‘Click For Slides’ icon in the middle of the page. If you read Dutch, you can also find some information on Capriolus, run by the Dutch pottery dealer Ger de Ree, by clicking here. Although van Woerden’s innovative work has become more widely known since then, I think this is just the start of a journey upwards. If you think so too, get in now by learning more! And to tempt you, here are some images of selected pieces from Els’ wonderful collection.