After returning from a great three days in York culminating in a fab retro and vintage find, it was straight into another retro event – the three-day extravaganza of Vintage London. Organised by design and fashion guru, and all-round cool guy, Wayne Hemingway, it aimed to celebrate ‘five decades of British cool’. And, boy, did it succeed!
The main event comprised a number of major performances of music from the 1940s-70s but, with only Saturday afternoon free, it was the ‘vintage high street’ next door to the Royal Festival Hall concert area that I was interested in. As I browsed through the many stands neatly arranged in marquees, it was great to bump into friends who were selling there such as Lesley of London’s Retropolitan, and Oliver of Brighton’s In My Room.
I also popped over to see my good friends from BBC Homes & Antiques magazine, who had filled a colourful beach hut-style stand with all manner of funky retro  treasures to accompany their marvellous magazines and super subscriptions. And, there, I was reminded once again what a small world it can be. I bumped into a lovely lady called Beverley, who I had met at the Antiques Roadshow in York only two days before! She’s a good friend of Keeley, who owns Vintage Emporium, the shop I had visited whilst there. As I’m sure you’ll agree, she looks absolutely stunning in her 50s dress, hat and hair – I simply had to have a photograph taken with her! 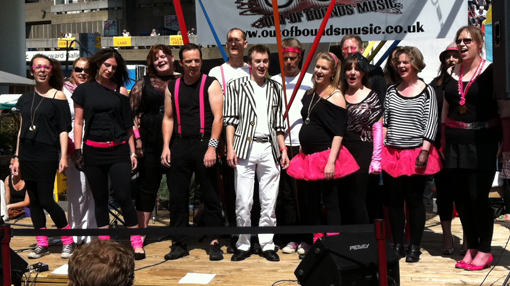 All of a sudden time caught up with me, and I dashed towards the back of the Royal Festival Hall to hear a good friend sing as part of the free performances that ran across the three days. Chris is part of a brilliant and humourous a-capella choir called Kitsch-in-Sync. He’s the one in the middle of the photo above, wearing the amazing 1980s Yamamoto striped jacket! They specialise in a-capella versions of legendary 1970s & 80s songs, from ‘The Lion Sleeps Tonight’ (originally composed in 1939, interestingly) to hits by The Eurythmics. They were a hit with the audience, and gathered quite a crowd. I certainly left with a smile on my face and an extra spring in my step!
‘Vintage London’ was the second retro and vintage event organised by Wayne Hemingway, and follows ‘Vintage Goodwood’ last year. I didn’t make it to that at all, but loved what I saw of this event. I’m sure that I’d have loved it even more if I had had time to explore and enjoy it properly. I’ll be very interested to see how it develops next year, considering the Olympics, and will certainly block out my diary when (or if) it happens again. Watch that space…

P.S.: My jacket is indeed vintage – it’s by Irvine Sellars of London, dates from the 1970s, and I bought it about five or six years ago at a vintage clothes fair just off Bond St organised (I think) by Gray’s Antiques Market.