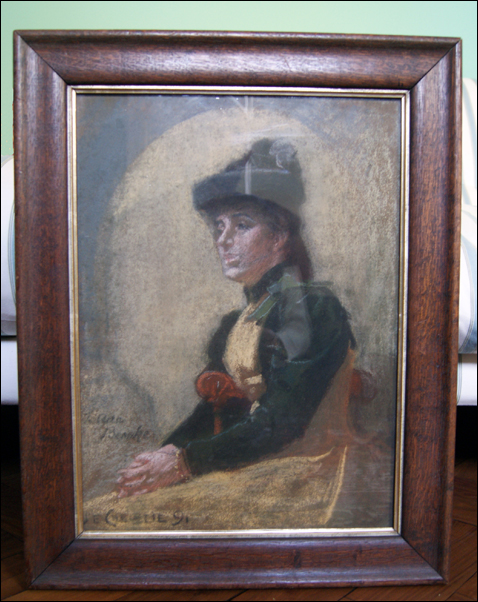 I don’t look at this sort of thing usually. Those of you who know me, my books or my site know that I’m a ‘twentieth century boy’, and forays into other periods are scarce. It might surprise you to learn that our home is far from the mid-century ‘Madmen’ paradise that you may think, but is in fact filled with a huge variety of objects from many different periods – many of them 18th & 19thC. Most of our furniture is Victorian, for example, and I can’t resist etchings. They’re things that I picked up on the way because I liked them, or because they caught my eye or, as is the case with so much ‘brown furniture’ they were inexpensive and well-made. 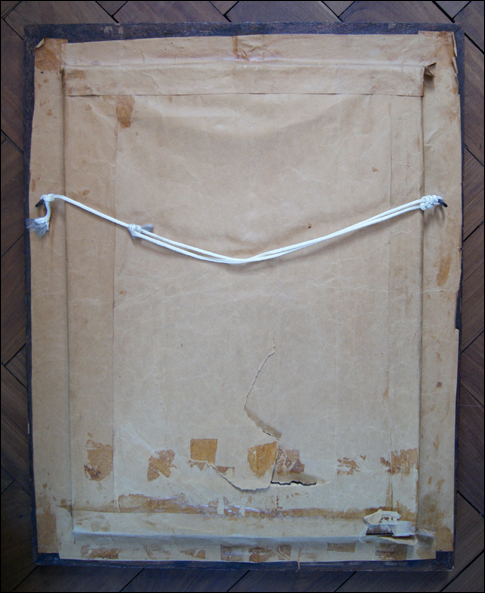 Visiting Past Caring in Islington, one of my favourite central London hunting grounds, this weekend I happened on this rather chocolate boxy Victorian pastel of a rather serious looking lady. It’s not the usual thing I’d buy and it looked rather out of place amidst the mid-century miscellany that the shop is known for. It seemed to retain its original oak frame (very Victorian), glass and backing paper. It was dedicated, presumably to the sitter, and signed by the artist, albeit indistinctly. Dated 91 for 1891, it just shouted the style of the day, as did the sitter’s clothing. I liked the sombre yet calm colours, her pose glancing off to the right, and the moon-like design behind her.

I had already decided to take the weekend off, but the challenge of researching a picture seemed too good an opportunity to miss – especially as pictures are far, far from my field of expertise. A price of £55 was negotiated with the shop’s owner and off it and I wandered. Excited by my purchase, I tweeted a few images to see what people thought. Within minutes @treeflame had replied with three words – James Elder Christie. Spot on!
Scottish artist James Elder Christie (1847-1914) studied art in Paisley and South Kensington and won two medals at the Royal Academy in 1876 & 1877. He is known for his portraits, paintings of children and moral allegories, and his work illustrating the poems of Robert Burns. During the 1870s, he attended the same life class studio as James McNeill Whistler whose work he admired and with whom it appears he stayed in contact until Whistler died in 1903. Christie will undoubtedly have earned his living in London at this point as an artist and portrait painter, but it’s also known that he spent some time in Paris. In 1893, he moved back to Scotland to live in Glasgow, and it’s interesting to see that the BBC Your Paintings archive shows that Paisley Museum & Art Galleries hold a number of his paintings. 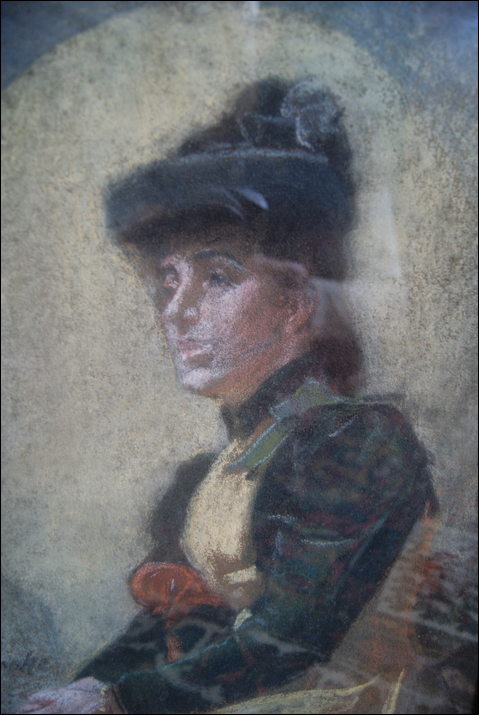 Glasgow at this time was thriving, and the economic boom it was experiencing led to important and progressive contributions to art, architecture and the decorative arts – primarily in the form of the introduction of the modern Art Nouveau style. Of course, the most famous name associated with what became known as the ‘Glasgow School’ was the eminent designer and architect Charles Rennie Mackintosh. Christie’s time with this group was earlier, however, and he was associated with the ‘Glasgow Boys’, a group of progressive, post-Impressionist artists who rejected academic traditions and were influenced by the naturalism and realism of the Hague School and the Barbizon School, by Whistler’s work, and by Japanese prints. Key members included James Guthrie (1839-1930) and John Lavery (1856-1941). I think many of these influences can be seen, albeit lightly, in my portrait. I’m hire sure it was very fashionable in its day. My pastel portrait is relatively skilfully executed and seemingly in entirely original condition. Dated 1891, it was probably executed when he was still in London. 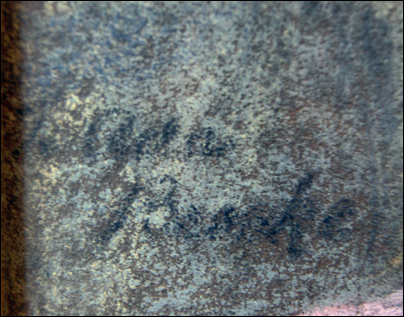 Much of the value and desirability of a portrait depends on who is depicted. There are more people who’d like a portrait of Queen Victoria or Disreali, than one of my granny or great-uncle, for example. I managed to decipher the dedication as ‘To Ada Burke‘ which, after some judicious googling, seems to put her more into the latter category. Rather than being a famous socialite, actress, author, or political mover-and-shaker, she was most probably a relatively well-to-do wife whose husband commissioned a portrait of her.

So what’s my portrait of Ada by a known and reputable, but far from famous, artist worth? Having looked through auction records over the years, I doubt that she’d fetch more than £100 or so at auction, if that, but it still represents a good return on my investment, if you subscribe to all that. But for me, she brought new knowledge and experience and an afternoon well-spent –  together with a pleasing period pastel portrait to hang in a suitable place, light well and enjoy.