I’m a great fan of Blenko glass due to its stunning, vibrant colours and array of quirky forms. The pieces that attract me the most are the large floor decanters, with their voluptuous, sculptural curves and extravagently large stoppers. I’ve only been lucky enough to own one piece – the 22in (56cm) high Turquoise decanter shown here, which I spotted on holiday once and hauled back home – all the way from St Louis, Missouri! Alas, I sold it some years ago – all part of the perils of being a dealer and a collector I guess. I regret it as we don’t see much Blenko here as it was rarely exported from the US into the UK, and I’ve always wanted to learn more. So I was delighted when my friend Toma Clark Haines, the Antiques Diva, introduced me to Damon Crain, a researcher, dealer and collector of Blenko and other American art glass based in New York.
Blenko was founded in 1921 in Milton, Virginia by British expat glassmaker William Blenko as The Eureka Art Glass Company. By 1930, they had developed a range of brightly coloured table and decorative wares and changed their name to the Blenko Glass Company. In 1947, they hired their first resident designer, Winslow Anderson, to expand the successful range. He laid firm ground for his successor, Wayne Husted, who (from 1953-63) took the company’s products to new heights, literally and metaphorically, as it was he who was responsible for the larger pieces of which I am such a fan. 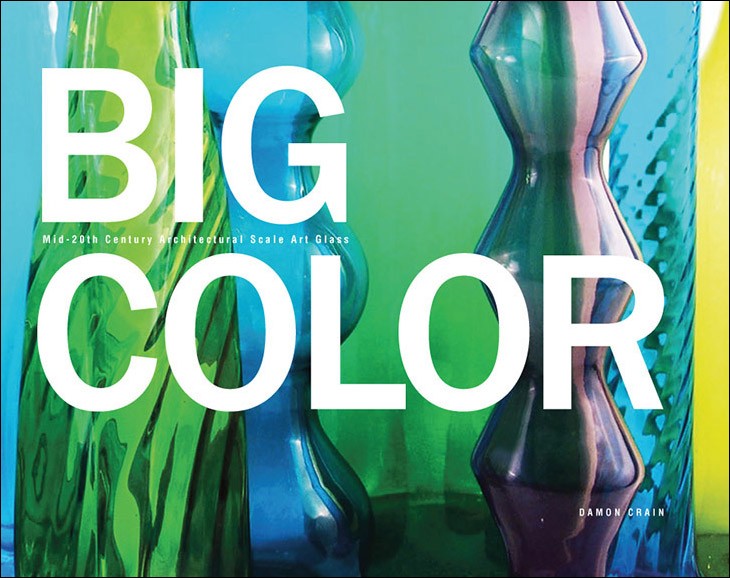 In 2013, Damon put on an exhibition of many of these larger designs which, in his accompanying limited edition catalogue BIG COLOR, he explains were part of a range introduced in 1954 and aptly known as ‘Architectural’. Most examples are over two feet (70cm) tall, with the tallest measuring a staggering 46 inches (117cm) high! The image below shows the scale compared to an armchair in the bottom right corner. The unusually large heights aren’t the most important factor to consider however – the curves, colours, proportions and how each design relates to another and its surroundings are also important. These are domestic sculptures as much as anything and the designs can be seen to echo developments in modern art, architecture and, during the 1960s, the burgeoning studio glass movement. Their sheer size and visual impact is also somewhat emblematic of the US during the 1950s – big cars, big roads, big houses – and big egos!

I’d love to have seen the exhibition as the large format, hardback catalogue is a joy to behold, with large, full colour photographs of the Architectural range grouped together, or displayed in situ in collectors’s homes. Apart from providing detailed and erudite historical and contextual text, it revels in the stunning appearance of the glass itself. Reading through, it also struck me how ‘on trend’ this range is – not just because it epitomises the currently in vogue mid-century modern look, but because it fits in with how collecting in general seems to be developing. Endless shelves groaning under the weight of hundreds of examples, or rooms packed to the gunnels, are gone. They’ve been replaced by carefully curated small groups, tastefully yet dramatically arranged to show the pieces themselves off to their best advantage and act as a complimentary focal point within, or a contrast to, the rest of the interior. Their simple forms and single colours also work well in many different styles of interior, including the current trend for mixing and matching pieces from different countries and periods, and perhaps highlighting one aspect that unites them – such as a curving form.

Alas, the range was expensive when it was sold originally and not everyone wanted something so large and impractical in their home. Furthermore, their huge sizes meant that many pieces were damaged or broken over time, especially when fashions changed and they were consigned to basements or attics, or given away. As a result, many designs are very rare today and prices can easily reach thousands of dollars, with top prices exceeding $5,000. There’s also interest from museums, and it’s great to see that Damon has placed examples in institutions ranging from the Toledo Museum of Art to the Smithsonian’s Cooper Hewitt National Design Museum. Blenko’s ‘Architectural’ range is worth looking out for, for so many reasons. Even though the Turquoise decanter I once owned is not part of the ‘Achitectural’ range, I wish I hadn’t sold it as it’s the closest I’ll probably ever get to owning something from this landmark range.

Damon Crain can be contacted via vmglasshouse.com. BIG COLOR was published as a hardback catalogue in a limited edition of 500 signed and numbered copies. it is available for $200 plus shipping – click here to order a copy. All images, except of the Turquoise decanter, with thanks to and copyright of Damon Crain.