If I don’t find anything I want when I’m browsing antiques shops and fairs, I’m fond of hunting through glass cabinets for cufflinks. Whether or not I take any home depends on how much they cost. Last time I did this, I found this intriguing pair of brass cufflinks, that looked like they had been gold-plated at some point as some of the plating remained. 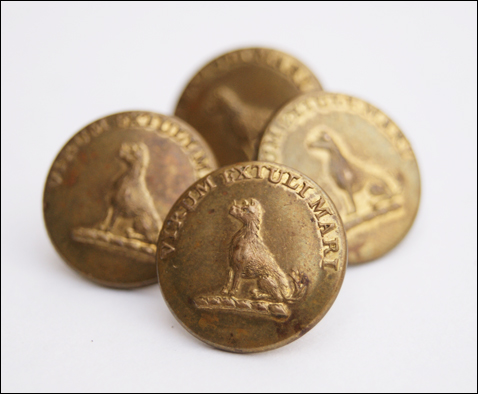 I usually go for much more colourful enamelled examples, or those made from precious metals that the seller may not have identified…! But these intrigued me. The heraldic motifs of the seated large dog beneath a Latin motto begged to be researched and, well, the £2 price tag was hardly going to stop me!
What I found after some judicious googling the Latin motto, and double-checking the information, was a rather charming canine tale.
The cufflinks possibly related to William Phillips (1752-1828), who inherited numerous estates from his family, owned the leases on prestigious central London properties and possibly ran a wine merchant in the 1780s. One day, while bathing at Portsmouth, he ventured out too far and got into trouble. Two nearby fishermen, rather than race to his rescue in their boat, decided to try and strike a deal with the horrified bystanders. While this was going on, a Newfoundland dog plunged into the water and rescued Mr Phillips. He was so grateful that he bought the dog (whose name seems to have been forgotten!) from its owner, a butcher, and took him home. 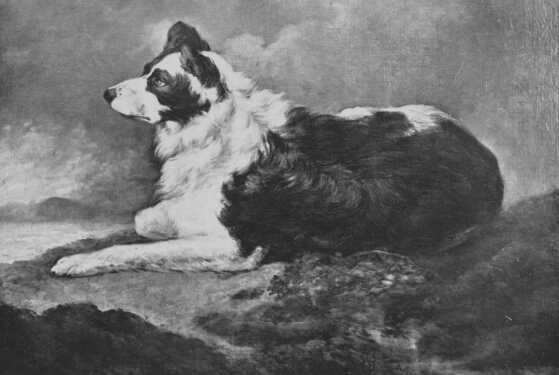 Phillips had the dog painted by the famous animal and English scene painter George Morland (1763-1804) and the painting was copied in an engraving (above) by Francesco Bartolozzi (1727-1815). Not only that, but the thankful Phillips worked the image of the dog and the motto Virum Extuli Mari (I saved a man from the sea) into all his linen and held an annual festival at which the dog was the guest of honour.
But my cufflinks don’t look like they were made in the early 19thC – more like a century later – and, like the St Bernard’s, the Newfoundland dog is known for its selfless, instinctive desire to save and there are hundreds of stories of them dashing into water to rescue people. Two such stories occurred in 1906, one in Australia and one in the US. 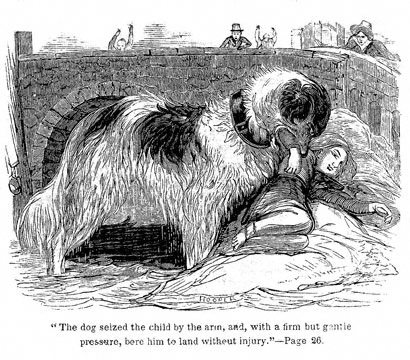 The Australian one is the more amusing, with a Frenchman questioning the abilities of his friend’s Newfoundland called Turk. The Frenchman offered to jump into a nearby river to test Turk, and was hotly pursued by the dog as he did so. Alas, on the other side of the river was another Newfoundland with its master. That dog jumped in to the rescue too, and both dogs grabbed a coat tail each and attempted to drag the Frenchman back to their respective owners. The coat was swiftly torn in two!
The story in the US involved a Newfoundland doing what they do in the sea near New Orleans, into which two young children had fallen. The rescue story circulated in newspapers across the US and its likely that my cufflinks were made then, to commemorate both the event and the legendary general abilities of the Newfoundland. The reason Phillips’ motto was known about was because his story appears to have been told many times since the early 19thC – for example in April 1929, when it appeared in a copy of the Brooklyn Life magazine. It also no doubt added some class and distinction to what are some rather fascinating but very inexpensive gentleman’s accessories – both then and now!