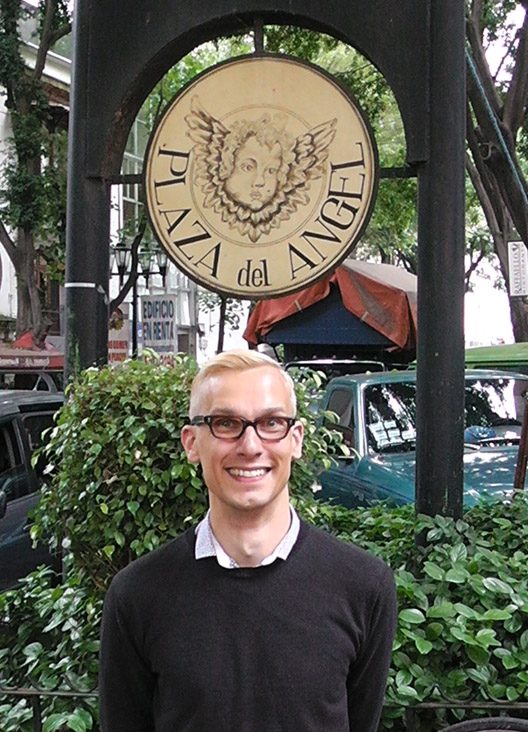 I’ve split my blog posts about antiquing in Mexico City into two, each focusing on different areas of the city, to make it easier to read. My first post, which covers the two nearby markets in the upcoming Roma Norte district, can be read by clicking here. If you’re looking for something more upscale than a flea market, it seems the place to go is the Bazar des Antiguedades (antiques bazaar) in the Plaza del Angel, in the Zona Rosa district near Reforma. Those of you who have read my first post will know that I didn’t buy anything in Roma Norte. Those of you who know me will know how rare that is for me!
The market is set in a large building with covered arcades of small shops and a small square with arched walkways. On Saturdays, all the shops fling open their doors (opening times on other days vary widely, and there’s no promise that they’ll be adhered to!), and the walkways and square fill up with vendors selling from tabletops or rugs. It’s a busy, bustling place to be, with a great vibe. When we arrived mid-morning, there was clearly a lot of trading going on between dealers and regulars, given the conversations. It’s also largely shady, which is a major bonus when most days have blazing sun and reach over 30/86 degrees! 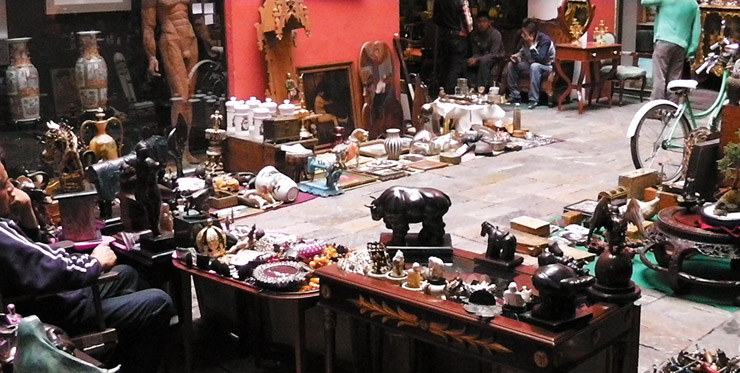 Although it doesn’t look it at first glance, the quality is much higher than the Roma Norte flea markets. Gone are the plastic action figures and ‘junk’, for a start.The shops tend to focus on 19th & early 20th century ‘traditional’ Antiques, including Louis-style and mahogany and walnut furniture with gilt brass mounts, chandeliers, mirrors with ornate frames, traditional ceramics, and cut glass. Having found out in Buenos Aires that most of the colour-flashed and ornately cut glass on sale there was produced there, I suspect much of this was too.
Surprisingly, there wasn’t much Art Deco on offer. I had somehow expected it to be like Buenos Aires, and full of Art Deco and Art Nouveau pieces. Not so, even though there was a few bits of Nouveau, particularly in the form of Gallé cameo glass (Some right, much wrong). This lack will be due to the fact that Mexico didn’t see the economic boom that Argentina did during the 1920s & 30s. If you’re looking for mid-century, retro, or vintage pieces, you’ve come to the wrong place, and possibly the wrong country. Mexicans just don’t seem to rate (or have?) that sort of stuff at all – yet. Only one shop had a display of this type of thing, but even this was limited to one window of Jacobsen chairs of an indeterminate age!

Having said that, I did spot a few lone pieces at the back of cabinets and around shelves. The first was an Orrefors graal vase by Vicke Lindstrand which, unfortunately had a serious crack running through it. The second was the first piece I actually bought – I spotted this Moser obelisk almost immediately due to the colour. Its asymmetric five-sided form is decorated with inscribed swirls and cut lines, and the base bears the company acid-stamp as well as the acid-stamped symbol for the designer Oldrich Lipà. Standing 12in (30.5cm) high, it’s a pretty impressive thing. The asking price was 4,000 pesos (£190/$300), but for me that was just the start. I came back with a cheeky 2,000 pesos £95/$150) and a grin. Even though he wasn’t in the mood for humour or smiles, we bartered further and I ended up paying my cheeky offer in cash. I think that’s an extremely good deal, but it also made me wonder what he had paid for it! As he packed it up I looked around the rest of his shop and his Gallé, Baccarat, and other pieces seemed to be more correctly priced for a high end shop. Either he didn’t appreciate Moser of the postwar period, or hadn’t spotted the lightly etched marks on the base. Whatever, we shook hands and I went on my way.
Watches seemed to be very popular, and some pretty serious looking trading and swapping was going on. Away from the known brands, there were some interesting look-a-likes (such as copy of Bulova’s famous LED driver’s watch)  possibly produced in Mexico or South America during the period. And a few fakes to0, at least to my eyes. Every time I asked the price of something I liked and thought I could afford, regardless of the quality of the watch, the answer was 2,000 pesos (£95/$150), which must be the ‘Blond Tax‘ that Rodrigo the barman spoke of again. Had my budget been large enough, and were it not for the fact that this was day three of our holiday, I may have treated myself. But condition wasn’t generally great either, and I’m a bit of a fusspot about that with a watch.

I resisted the temptation to buy a piece of pre-Columbian, Aztec or Mayan art. Partly because it’s not my area and I wouldn’t know if it was authentic or not, and secondly because I rather wanted to pursue contemporary Mexican folk art a little. There were plenty of brightly painted, carved wooden masks, carved wood and stone sculptures, and typical meso-American ceramics on sale at very affordable prices – usually under 1,000- pesos/£50/£75. As with the Roma Norte flea markets, they offer something different from the souvenir shops with a little age and wear, and the outside chance that you may buy possibly something authentic! 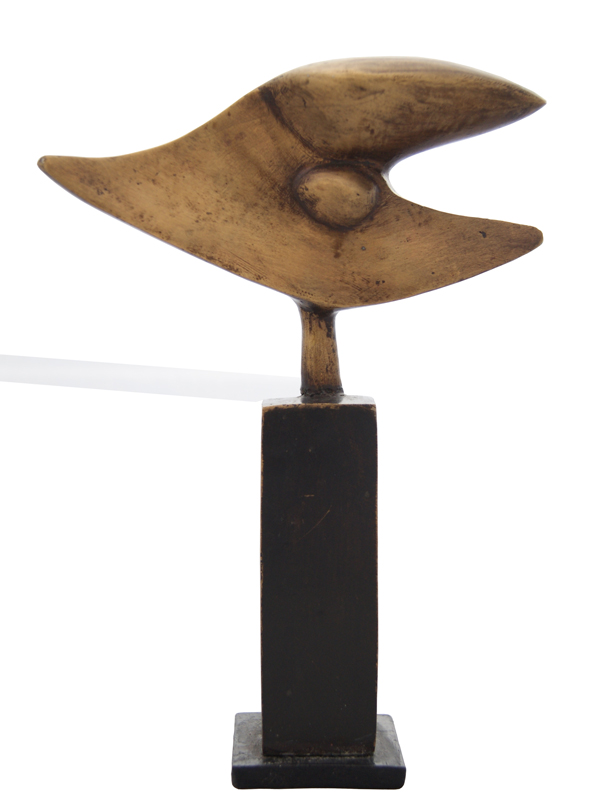 Having spotted that the few mid-century things there were likely to be mis-understood, as we left I picked up a small sculpture I had admired on a stand on the way in (spot it in the picture above). In the UK and Europe, this is the sort of thing that would be marked at anything from £50-150 depending on the place of sale. Just because it’s brass, signed with a maker’s mark, of a pleasing 8in (20cm) size, and is very visually appealing.

I don’t know who made it, and I probably never will, but it ‘called out to me’.
I asked the standholder how much it was, and he replied 150 pesos (£7/$12). I retorted with a 100 pesos offer (£4.80/$7.50) which was immediately agreed. All over in a matter of seconds! I don’t really care if it’s not by anyone in particular, I just like it for what it is. But if you do know, I would like to know! The only other thing I would have liked to have bought was this vintage Apple computer. The stall holder was engaged in some protracted and very heated bargaining for a group of watches, so I never found out how much it cost, even if it could have fitted in my luggage! 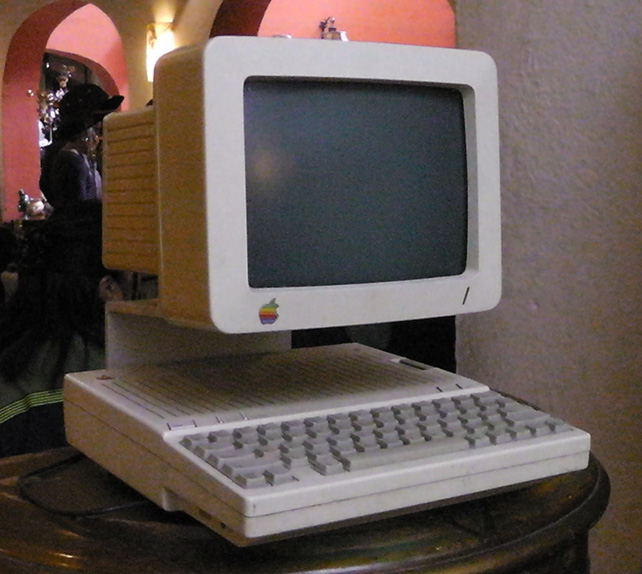 On Sunday, we decided to visit the vast La Lagunilla market, which purported to be one of the largest and most historic markets in Mexico City. It is truly VAST, and is divided up into sprawling sections for each type of commodity, from clothing, to fruit and vegetables, to furniture. The antiques zone is said to be as strong as ever, and has apparently been frequented by a number of Mexican celebrities on the hunt for something unique and cool. 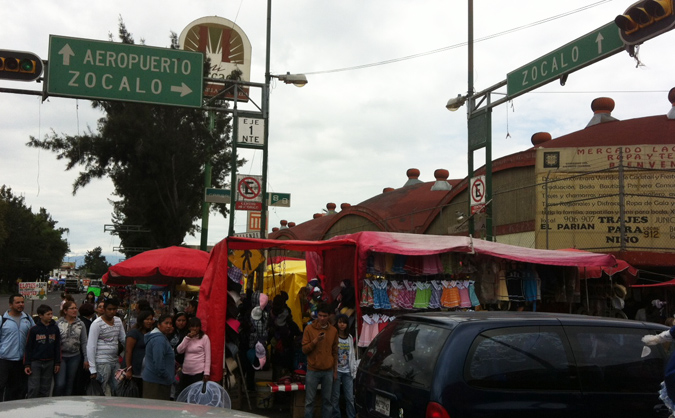 Our taxi driver didn’t know where the antiques section or flea market was, and dropped us on the main drag. Stepping out into the sweltering heat, noise and colour was quite a shock to the system. I hadn’t expected to it be so frenetic, busy, noisy – and filthy. There are no signs for each zone, and the many warehouses that contain more established vendors are surrounded with narrow aisles of market stalls. Each and every one is packed to the gunnels with ordinary Mexicans going about their Sunday shopping, be it for a cheap plastic toy, rip-off branded clothing, or Sunday lunch. 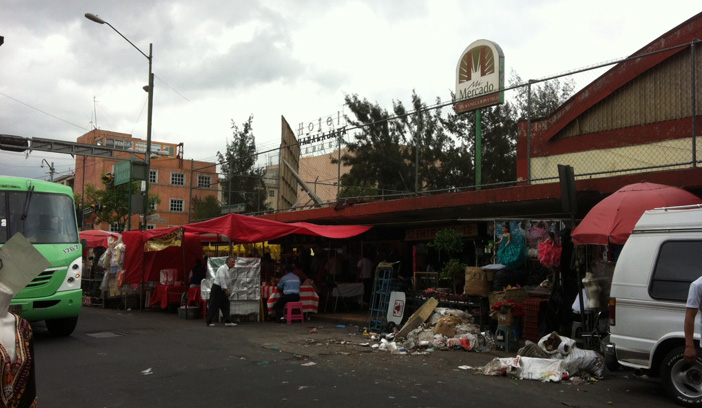 Although I didn’t feel in danger per se, mainly as there are police everywhere, it didn’t help being quite smartly dressed, over six foot tall and blond! My internet research had revealed the corner of Reforma and Bocanegra St to be the antiques area. No it wasn’t, that’s just one of many corners of this mega-market. Another said it was at the corner of Comonfort and Allende. No it wasn’t. So we walked up and down Allende. The very kind policemen I asked sadly sent us to different places, most of them selling new, but antique-style, furniture. So, I’m afraid to say that for the first time ever, we gave up. We really didn’t know where we were going and it was simply too hot, smelly, tumbledown, and shall we just say sketchy. Right now, I wouldn’t advice going there unless you want to experience a ‘developing world market’, which does have its place in travelling. If you do go and find where the antiques and flea market zone actually is, please let me know so I can update this! You’ll probably tell me I missed out big-time!