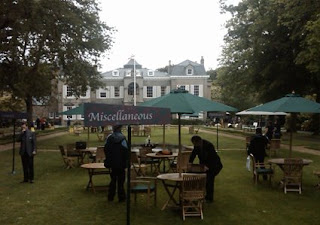 Well, at least the rain held off! It was that that everyone seemed most worried about as the merry band of Antiques Roadshow production crew and specialists gathered in the beautifully manicured grounds of Saumarez Manor on the idyllic island of Guernsey. The photo above shows the event just before the gates opened. What you can’t see is the queue, which was there in force, with everyone clutching their carefully wrapped treasures. 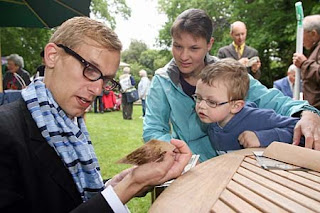 All eyes gazed upwards at the stormy clouds, but someone up there smiled down on the BBC, and by the time the afternoon, and the queue, had been and gone, the sun was shining. As with all Roadshows, thousands of people had brought thousands of objects to be appraised, commented on, identified and valued by the specialists, and many went home with an extra broad grin on their faces. 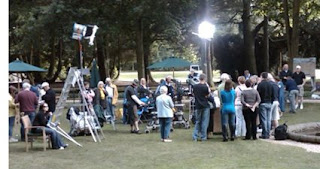 I managed to film something (above) from amidst everything I saw, and you’ll just have to wait and watch the programme to see what it was!
The next day, before I left for Jersey, I managed to make a call on a dear old friend of mine, James Bridges, who is now a consultant with premier Guernsey-based auctioneers Martel Maides. 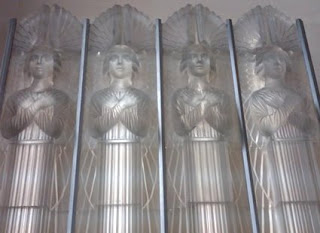 James and I first met at Bonhams in London, where he was a fellow specialist in the collectors department, specialising in diecast models by the likes of Dinky and Corgi, amongst other toys. I then joined him at Sotheby’s, before we both worked together for a third time at an internet company. We parted ways some seven years ago, so had a lot to catch up on, despite me suppressing my rude yawns due to the early start after the busy day. Truly good friends get on and chat however long they’ve been apart, be it 7 days or 7 years, and so it was with James. We shook hands on a ‘high’ and with promises to meet up again – soon.
Our meeting was cut short by a date with none other than René Lalique. Not the man, of course, but an entire church he designed from 1932-34. It was a privilege to visit St Matthews’ Glass Church, particularly with my esteemed Roadshow colleagues for company. Above, you can see an entire wall of monumental angels – this is just a small part of the wonders you can see, which will truly take your breath away. There really isn’t anything else quite like this church, and it provides the perfect balance to any retail therapy you might indulge in in the pretty centre of St Helier. 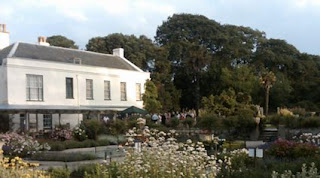 Before I knew it, the day was spent and the Jersey Roadshow beckoned. The people of Jersey were naturally no less charming, kind and welcoming than those of Guernsey, and the event, held at the picturesque Samarès Manor (above), was packed to the gunnels. Once again, I was lucky enough to film something I loved, and I know that plenty of other treasures were discovered and identified. I was also grateful for the light, late evening. After the work was done, I was able to take off for a peaceful wander through the gardens of the manor with cool and calming zephyrs blowing gently around me…the perfect end to a perfect week.