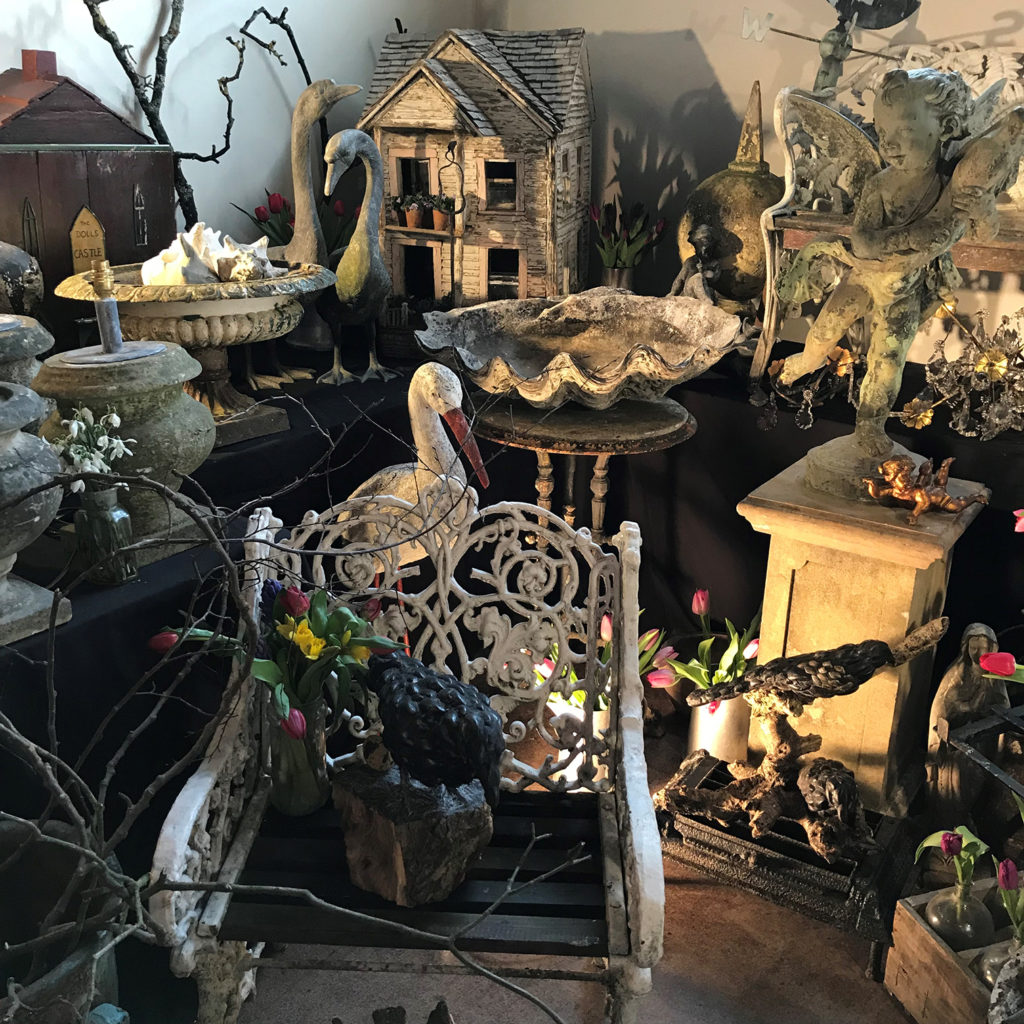 The third Bruton Decorative Antiques Fair will be held from the 19th to 21st October 2018, near the beautiful and deeply trendy Somerset town of Bruton. I’ve been attending since it began in 2016, having been a fan of its big sister, the Bath Decorative Antiques Fair, which was first held in 1989! At the Bruton fair last year, I took a group around the fair, sharing my thoughts about selected pieces from the many thousands of treasures on offer, and acting as a guide to the ever-changing worlds of antiques, vintage and decorative antiques. There was also a bit of ‘personal shopper’ advice too, as many of the guests went home with a piece or two! I also recorded a series of short Facebook Live videos on my favourite pieces from the fair. 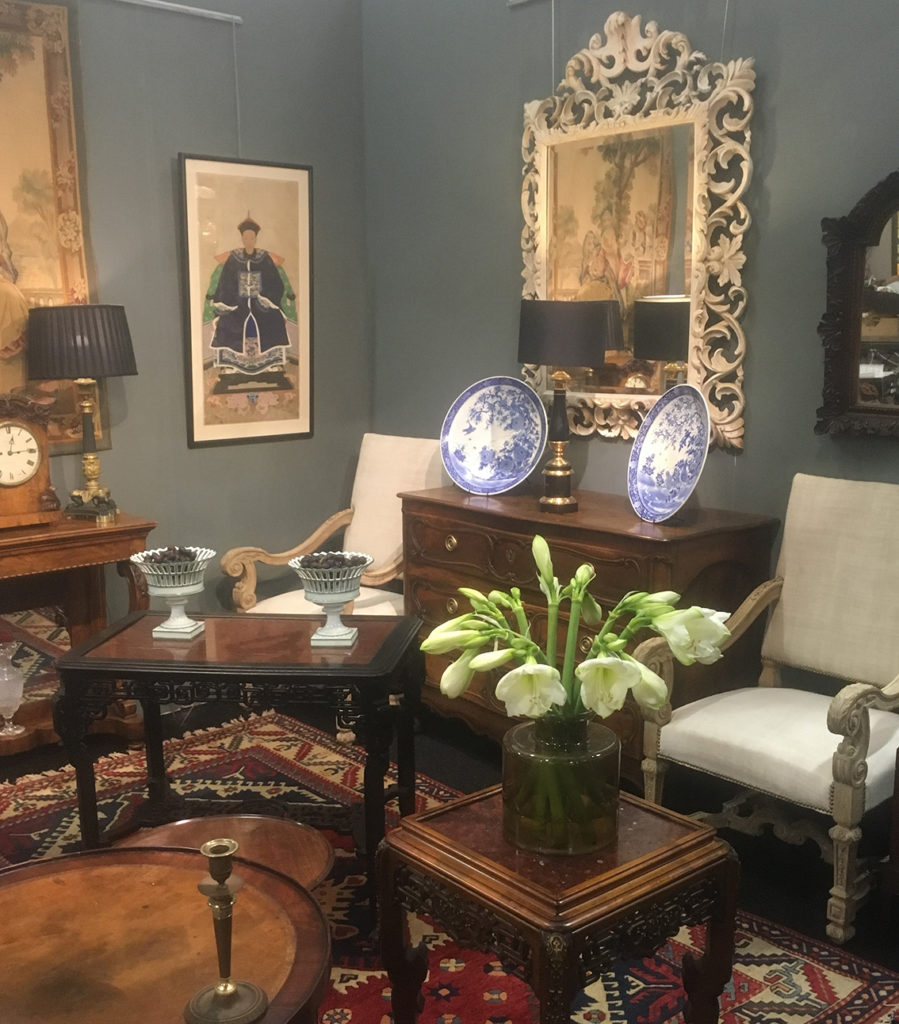 This year I’ll be doing the same – tune into Facebook on Saturday 20th to watch the videos, or even better come along to the fair. You won’t regret it! If you’d like to be part of one of my friendly and completely interactive guided tours, which are FREE to join, we’d be delighted to welcome you. Please contact the organisers at info@brutondecorativeantiquesfair.co.uk as there are only limited places! If you’d like a FREE entry ticket to the fair, it won’t cost you anything if you click here and fill in the form. 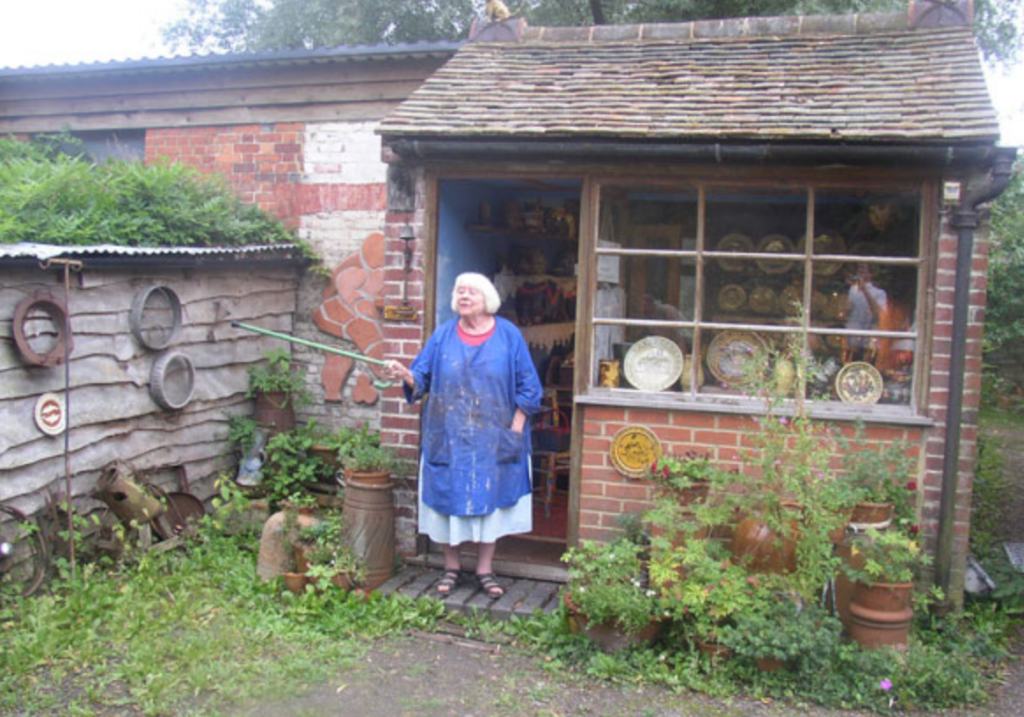 I can’t ever leave Bruton without adding a little something to my collection. And last year, rather than glass, it was ceramics that caught my eye. Hiscock & Shepherd always have a superb selection of craft-based antiques from the 18th-20th centuries, and I’m typically captivated by at least one piece on their stand. But this time it was two! John and Ema were selling a number of items from the personal studio of the studio potter Mary Wondrausch O.B.E. (1923-2016). From 1975 until her death Mary had her pottery in Compton, Surrey, not far from where I grew up. Although I sadly didn’t ever visit when I was young, I became aware of her work later on, as my career began. After studying at Farnham College of Art, Mary became best-known for her slip-decorated earthenware, which revived 17th & 18th century styles. She also wrote a notable book on slipware, which went into multiple editions. Her pots are in innumerable private collections across the world, and can also be found in the collection of the V&A museum in London. She was awarded the Order of the British Empire in 2000, and made an Honorary Fellow of the Craft Potters’ Association at the same time.

After her death, the contents of her pottery were sold off, and it was from there that my two pieces came. Both are intensely personal, and one is very well known by any visitors to her pottery. Sitting by the door was a small, strangely shaped figure of a mother in a dress holding a child, measuring just over 8cm high. The light clay, ‘hammer head’ form of her head, and the bold linear decoration recall pre-Columbian South American ceramics, but she hold a secret. Pick her up, and her legs swing free on wires. Shake her and she creates a light tinkle. It was this ‘bell’ that allowed visitors to gently disturb and summon Mary if she was absorbed with potting at her wheel. Considering how many times it was used, it’s amazing that it wasn’t damaged. The detail is charming, from the child’s incised hair to the complex glazed decoration. Inside her dress is a small handwritten (by Mary) white label reading ‘Not For Sale’. 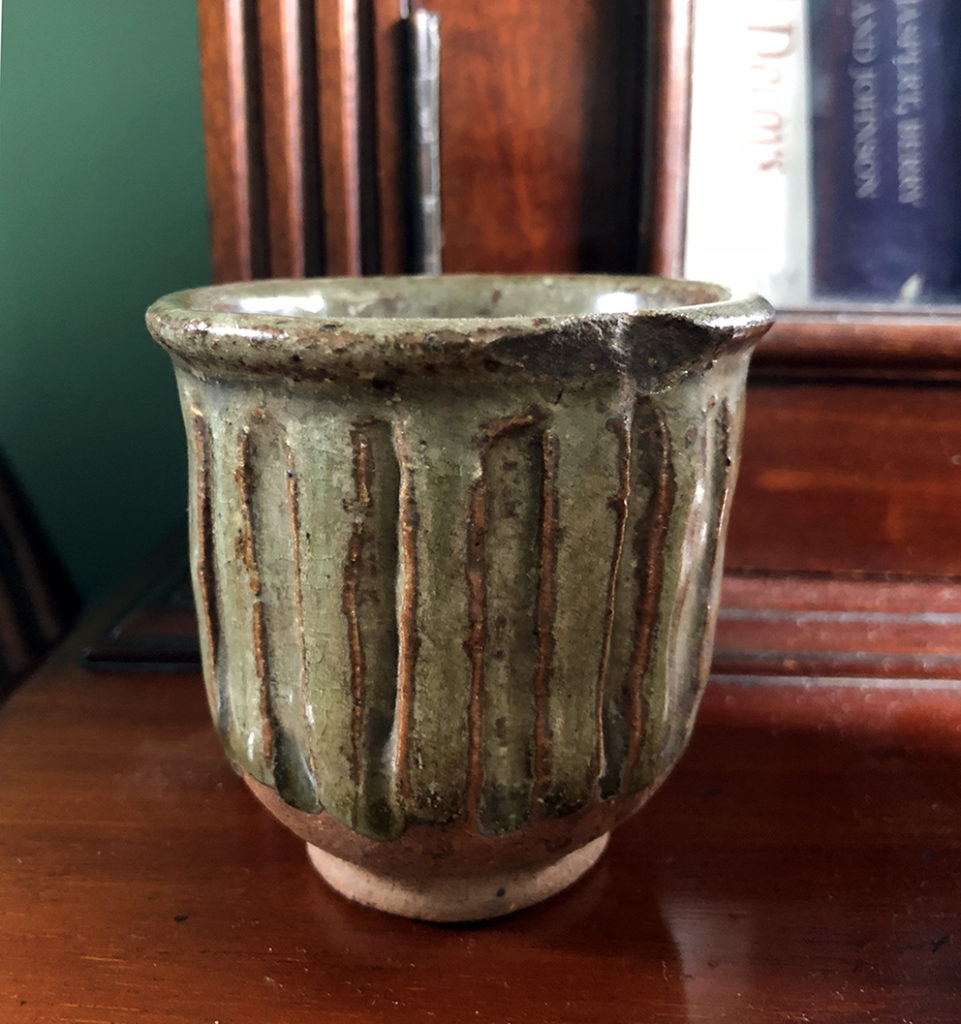 The second piece is somewhat different, and comes from deep within the pottery, buried at the back of her storage shelves. And it’s damaged! When she was studying pottery at Farnham, much of her studies understandably covered the work of the hugely influential potter Bernard Leach, the ‘father of British studio pottery’. Like most British studio potters, she was heaily influenced by him and his work, until she began to grow dissatisfied with his direction, due to its over-dependence on effects from the kiln on glazes and its reliance on ash glazes. When she encountered a book on traditional English slipware and visited the Glaisher collection of slipwares at the Fitzwilliam museum in Cambridge, she was hooked and she turned away from Leach’s style and teachings, often expressing her dislike of it all later in life. However, she must have retained a tiny fondness for it as she kept the rudimentary little pot I bought. Only 7cm high, it’s made very much in the Leach tradition and is covered with a green wood ash glaze. Inscribed MW, it even has an old chip on the outside of the rim – so clearly she was very fond of it indeed. Probably an early piece from her student days, perhaps it reminded her of her journey through studio pottery? It’s wonderfully tactile! 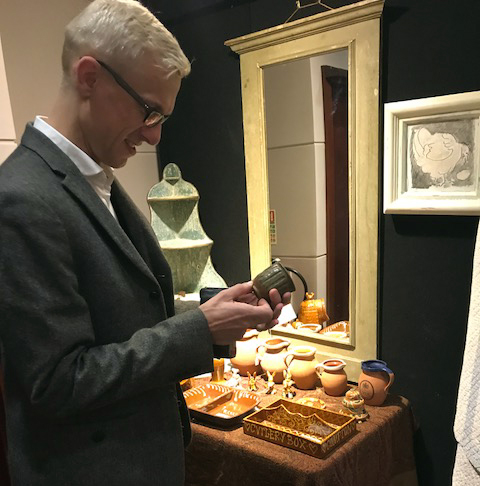 I found my treasures at Bruton last year – and I’m sure I’ll find more this year. And, I feel sure that you’ll discover your own when you come. Below you’ll find a small selection of some of the many thousands of pieces that will be available – make the journey to come and see them, and much, much more. Prices start from as little as £20, and you’ll find everything from furniture to lighting, ceramics and glass – whatever you’d find in a stylish home, in fact. The fair is a joy for the eyes as well as the mind too, as the stands are creatively and beautifully laid out by over 50 of the country’s top decorative antiques dealers. Truly inspirational! Buying couldn’t be easier or more pleasant, and delivery can be arranged if you can’t take the piece home with you there and then. I’ll look forward to seeing you there!