It’s usually the things that nobody knows about that attract and intrigue me. If they’re of a certain (good, or fine) quality, or have an interesting look, I want to know more. Browsing around the Cambridge Glass Fair, I came upon this rather unusual looking small posy vase. Somewhat etherial, it’s also rather appealing.

“But it looks like a child painted it!“, I hear you cry. You could indeed say that. But look closer and think. The enamelled flowers and leaves are rather evenly applied and don’t waver all around. The sunflowers themselves are placed directly opposite each other and, most importantly, the enamel is baked on, rather than just being painted on. So unless someone had access to a kiln or furnace, this was done in a factory. So, arguably, a child couldn’t have done this. Furthermore, the colour tone of the enamel is similar to those used at Haida (Nový Bor) in today’s Czech Republic. As well as its factories, the town is known for its glass school (fachschule) founded in 1870. 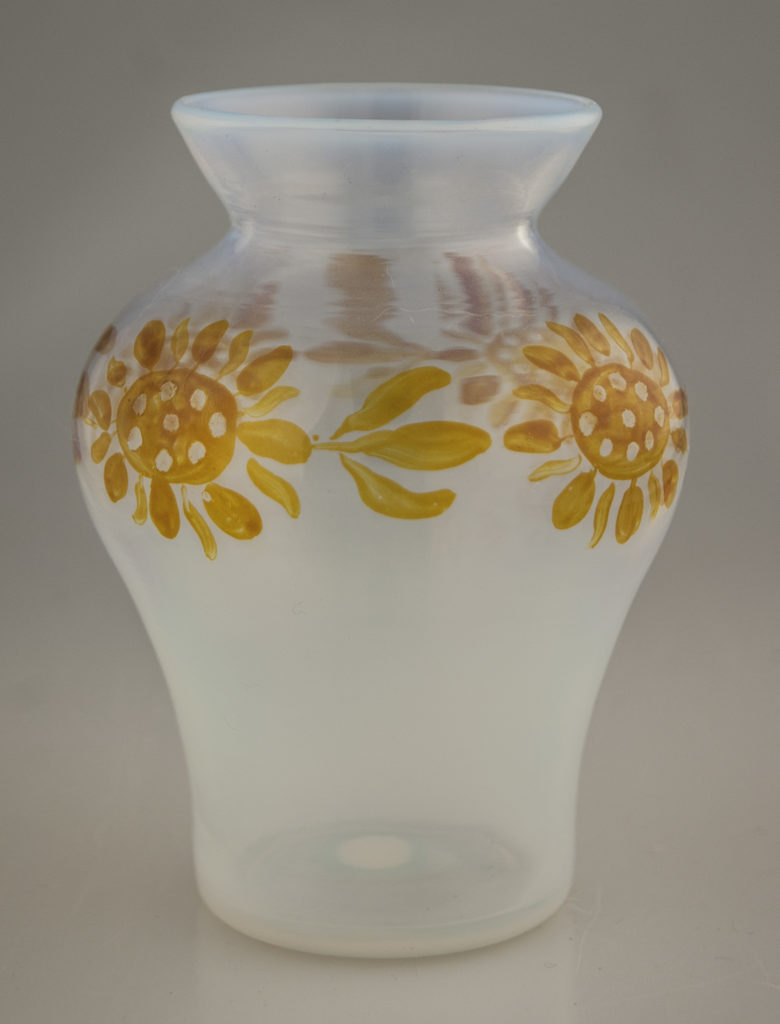 Then there’s the vase itself – a thinly hand-blown baluster form with flared rim and very well polished out and finished concave pontil mark. It has bands of strong milky opalescence around the rim and leading up from the base. The opalescence takes on a strong fiery yellow when light is transmitted through it. It’s pleasingly good quality, but not the best.
I’ve never seen one before, and nor had the dealer who was selling it. He thought it was interesting enough to add to his stock. But he had been unable to sell it, so I had to give it a home.
So what do I think it is? I’m not sure. Students at the Haida glass school produced a vast array of unique, finely (and sometimes not so finely) enamelled and cut designs which often represent the predominant decorative style of the day. Partly because they were part of a course (such as a graduation piece), they’re quite different due to their complexity and the skill shown in the often ornate decoration – my vase is somewhat more naïve. And I think it was intended to be naïve. It’s possible that a student produced this as a gift for his or her partner, as sunflowers symbolise adoration, loyalty and longevity. They’re also obviously related to the sun, which brings life, light, warmth and energy.

Otherwise, perhaps this student was looking at some of the smaller decorative and artistic movements from around 1900 to the first few decades of the 20thC. I’m reminded of the artists of the Bloomsbury Group and their country home of Charleston – I think this would look perfectly at home there. Another, less likely, option is the floral, less geometric, designs produced at Roger Fry‘s Omega Workshops. But they didn’t seem to decorate glass and I think this is from Bohemia or Czechoslovakia. Perhaps the artist was following general modern art trends away from the abstract and towards the naïve. As Picasso once said, “It took me four years to paint like Raphael, but a lifetime to paint like a child.”

If you know anything more about this vase, please let me know.