The many different hats I wear for my career often take me to unexpected places. Last month, I was delighted to be asked to visit Helsinki in Finland, home to many a notable mid-century modern glass factory and designer, from Iittala to Riihimäki and Alvar Aalto to Timo Sarpaneva. 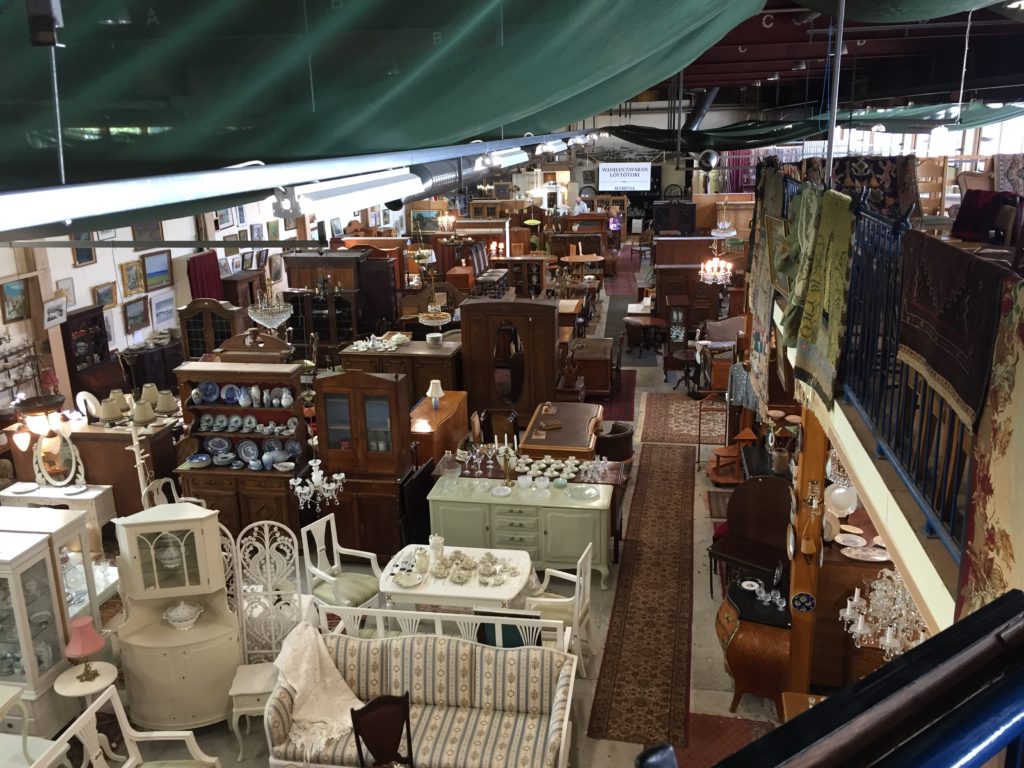 I don’t often get too much time to explore or go shopping on my own account on such work trips, so I was delighted when my kind host offered to drive me to a large antiques centre one morning, on the way to a location. Pulling up to a large metal warehouse on the outskirts of a deserted industrial estate oustide Helsinki, I wondered what was in store for me, but I wasn’t disappointed.
My host had judged my tastes perfectly, Tattarisuon Antiikkihalli Ja Löytötori was right up my street with over 1,000 square feet filled with furniture, ceramics, pictures, rugs, household goods and, of course, glass. Quality ranged from ‘very good’ to the sort of stuff one may find in a house clearance, and dates ranged from the late 19thC to last year. As soon as I was through the door, I was off like a crazed contestant on Supermarket Sweep. Having visited many Scandinavian cities before, I was aware that bargains can be few and far between, as prices in city centre antique and design shops can sometimes be higher than they are in the UK. However, this was tucked away outside of the city, and prices proved to be far keener. I had travelled light, so couldn’t take too much home with me, despite packing some bubblewrap in my wheelie bag.

Being me, I didn’t go for something obvious like an Iittala design, and instead plumped for something off-beat that I had always wanted – a design by Pentti Sarpaneva (1925-78). Pentti’s designs were almost entirely eclipsed by the work of his more famous younger brother Timo, who is best known for his work for Iittala. As such, Pentti has been largely ignored by glass collectors. His designs are very distinctive, combining bronzey-gold coloured metal with ambery coloured glass. They’re also a little like Marmite – you either love or loathe them.
After fighting in World War Two, Pentti studied metal art and graphic design at the Finnish Academy of Fine Arts and the Aalto University School of Art and Design. During the late 1950s, he began experimenting with jewellery and, from the early 1960s until his death, he produced designs for Kalevala and Turun Hopea. As such, it is jewellery that he is best known for today. Inspired partly by elements of the rugged Finnish landscape, partly by traditional Finnish lace, and partly by the materials themselves which were often left uncut or unpolished, he produced emotive, avant garde, bold and eccentric designs. Although not well-received by the public at the time, they are now considered comparatively scarce and are increasingly sought-after. 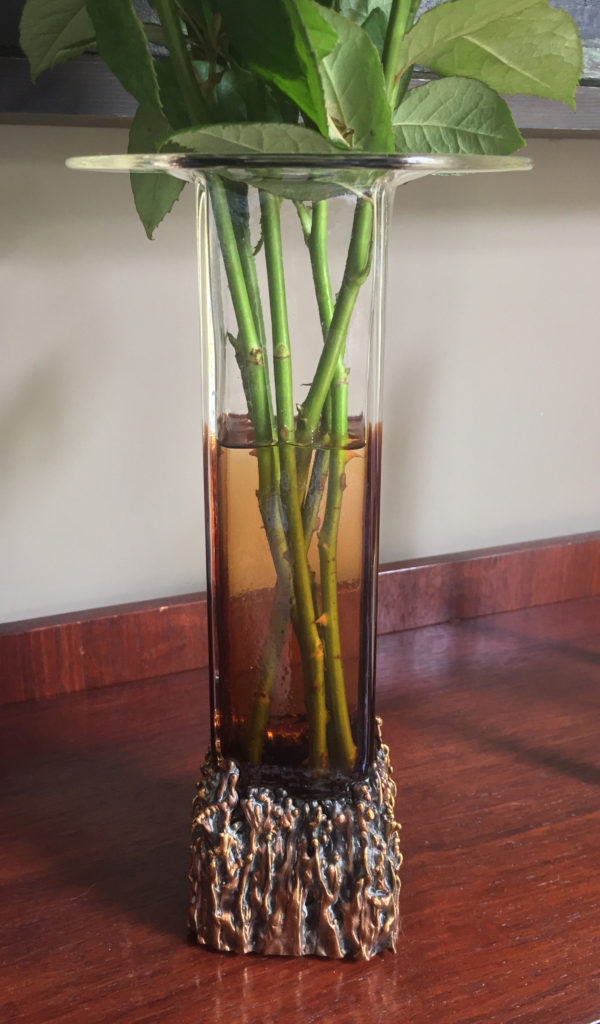 From around 1969 onwards, Pentti also produced a series of glass designs for Oy Kumela, alongside the Italian Armando Jacobino, and Kaj Blomqvist. Founded in 1933, and mainly producing utility and household glass, Oy Kumela was sold by the Kumela family to Humppila in 1976. In 1986 the group was acquired by Wartsila, with all of them later ending up as part of Iittala.
Pentti took his experience with metalwork and jewellery and quite literally combined it with glass. Mould blown forms tend to be very simple, and often angular. Colours include blue, green, yellow, and amber. Nearly all have applied textured bands of a bronzey-gold patinated metal, which was supplied by Turun Hopea. In my experience, the most common designs are a range of square section vases or bowls (above), with the metalwork often being engraved with commemorative wording. 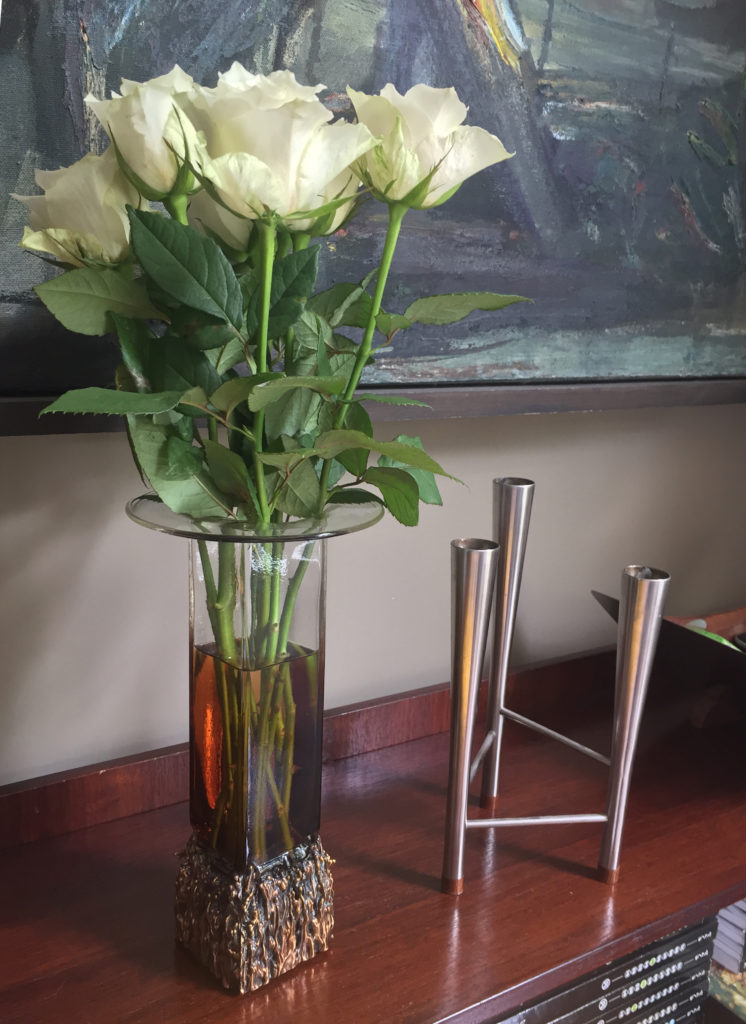 I hadn’t seen the design I went for before (left), so it is potentially scarcer than most. A tall square section graduated amber to clear body is topped with a wide, circular rim and blown directly into a textured metal base that resembles dripped wax or densely packed growing lichen. The base is inscribed Pentti Sarpeneva Oy Kumela ’69, and there’s the remains of a factory foil label. I paid €25 for it, which I think is a real bargain.
I’m a great believer in using pieces from my collection, and this almost space-aged 1970s design works as wonderfully on our 1970s dining table designed by Sergio Rodriguez, as it does on our 1950s Italian rosewood sideboard (pictured). Next time I’m in Helsinki, will I buy more of Pentti Sarpaneva’s avant garde designs? You bet!