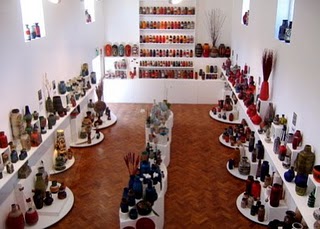 Ten years ago today, the first retrospective exhibition of West German ceramics of the 1960s & 70s, featuring the Graham Cooley Collection, closed at the King’s Lynn Arts Centre. Over 500 ceramics were included, and over 3,500 people came to visit. It was accompanied by a catalogue of the same title, written by me, of which three editions, totalling several thousand copies, have now sold out.
Together they launched ‘Fat Lava’ into the world. As well as bringing these ceramics together for the first time, the exhibition and book also revealed factory and designer names, ranges – and the sheer variety available out there. 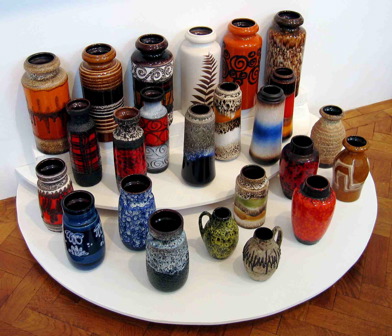 Since then, the term has gone on to become commonplace in the retro, vintage, collectables and antiques world. No vintage or 20thC design shop in the Western world worth its salt hasn’t handled at least a few, or has some in stock, and there are dozens of specialist dealers – and many thousands of collectors. Fat Lava has been featured in prestigious interior design magazines from Elle Decor to World of Interiors, and pieces are still commonly used by interior designers across the world for their punchy, vibrant and quirky colours and designs and affordable prices. You get a lot of bang for your buck!
Charity shops now price them highly, and are no longer the bargain basements they used to be in the 1990s when Graham built his collection and my interest was piqued. Stick the Fat Lava brand on the price tag and hike up the price – but you can’t criticise when it’s for charity. The ‘High Street’ even took notice, with shops such as Habitat and Anthropologie producing new versions in the same style as the originals in around 2009. They were often priced higher than the originals cost too! 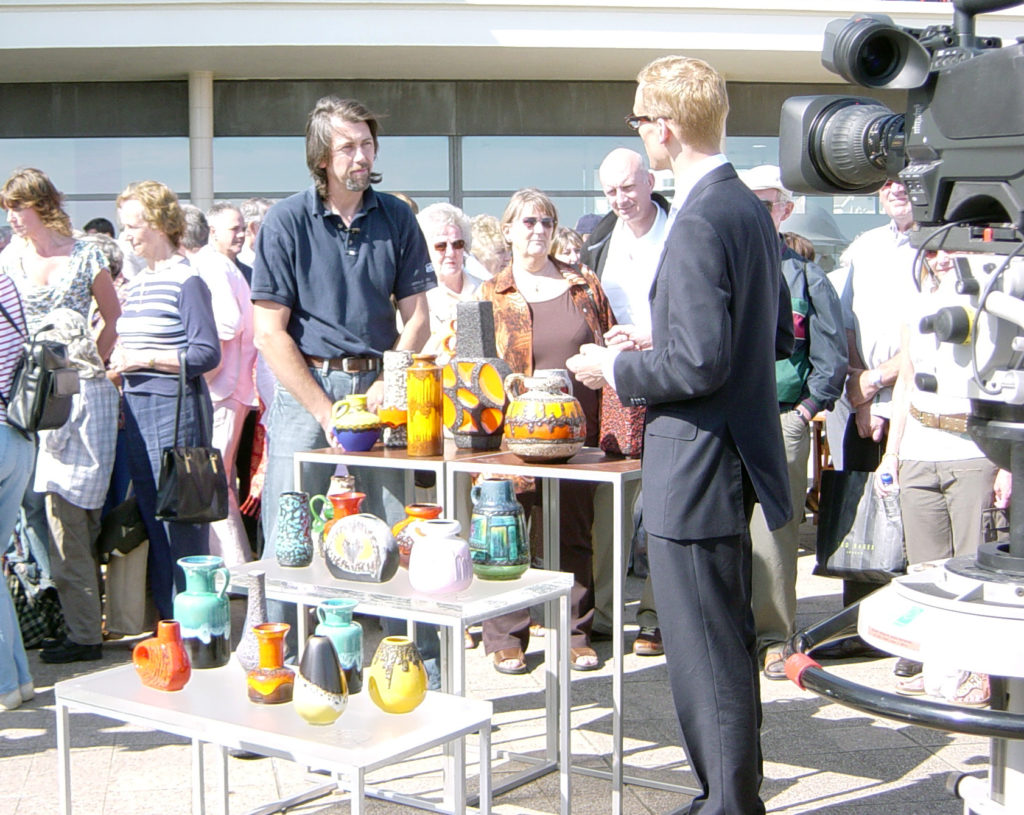 Fat Lava has also featured on TV innumerable times, from being tipped by experts as ‘The Next Big Thing’ to being a ‘Big Thing’ on many channels and programmes, including numerous times on the BBC’s legendary Antiques Roadshow. Examples have also been included in museum exhibitions across the world, and can also be seen in the permanent collections of many museums – something that really means a subject area has ‘arrived’.
There has been some criticism, apart that from those who don’t like these ‘Marmite ceramics’. A few writers, collectors and researchers, such as the pioneering Forrest Poston, have correctly pointed out that the term has been erroneously applied to the many designs produced from the 1950s-70s that don’t have the bubbling, brightly coloured glazes the term refers to. That’s true, but collectors and connoisseurs chose to use it, probably due to the lack of another catchy and ‘cool’ cover-all term to describe them. Some have also criticised the lack of serious, scholarly research and analysis into the area. That may also be true, but collecting is about fun too. 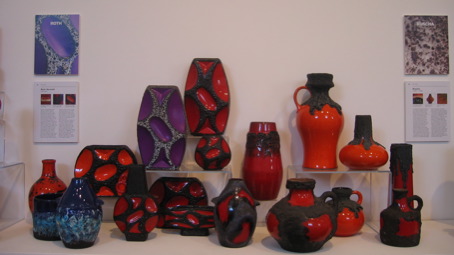 As ever, once the initial buying fever was over, the market stratified and matured somewhat. Prices have remained static for many pieces by Scheurich and Bay, but have risen dramatically for some designs by Roth Keramik, Ceramano, Otto and Kreutz. Glossy glazed brown and beige mass-produced and easily found examples are still worth a few pounds, but the wilder, rarer and more bubbly ‘art ceramics’ can fetch high hundreds of pounds or more – prices once only seen for fine 18th & 19th century porcelain. How I wish I’d bought that blue Roth ‘Guitar’ vase back in 2002 for what seemed like the crazy sum of £50. What is that worth now? £800? £1,000?
But the biggest change has been seen online. Kevin Graham launched his (now vast) chatroom and information site soon after, and there are literally hundreds of sites across the world offering information and tens of thousands of pieces for sale. New information has been found and original catalogues and documentation have been rediscovered, allowing more accurate identification, and re-attribution, of factories and designers. Any keen observer will have seen the developments and discoveries made with Roth & Marei (in 2012), Oswald Kleudgen and, more recently, Walter Gerhards. Understanding has deepened and grown beyond our structured and semi-educated ‘stab in the dark’ in 2005. Most collectors and researchers have generously shared for the greater good the information and original catalogues they have found, but a few have sadly chosen to keep it to themselves or have used it aggressively to attack others, in attempts to make those people look foolish. Given that this is all about collecting, appreciation and enjoyment, this does seem rather pathetic and childish. Pots not Putin, guys and gals! 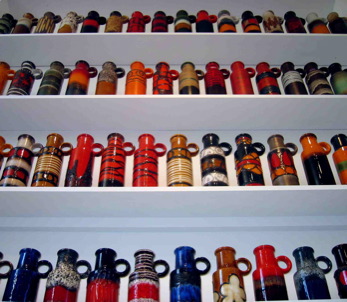 Before the Fat Lava exhibition and catalogue, there was pretty much nothing out there, except for the ceramics themselves. Some bore labels bearing names, but there was no widely known backstory to them, or this huge undiscovered market that captured an unrepeatable moment in ceramic design history so perfectly.
And it was the objects that Graham and I started with when pulling 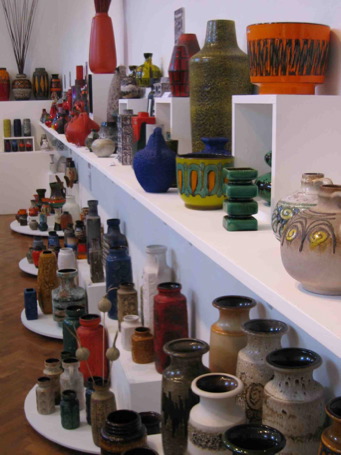 the exhibition and catalogue together. Amassing his collection together in one space allowed us to make links in terms of shapes, glazes, styles and marks. With help from labelled items and information from selected dealers and collectors who had experience handling these ceramics, we were able to devise a structure and identify factory names and groups of designs within them. Experience collecting came into play in discerning rarity and identifying designs which were more common in Germany or the UK than anywhere else.
We couldn’t just ‘google’ them like so many people do now when confronted with something unknown. The information just wasn’t there, and Google was far from the forceful first stop for research that it is now. In fact, when we started work on the project, Google had only been founded six or so years earlier, in 1998. Early days indeed. 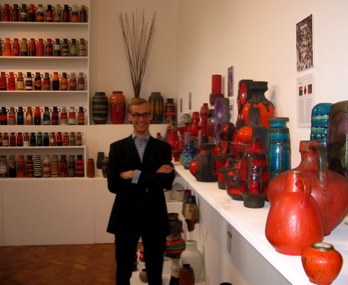 Of course, so much of the information we initially worked out, and others went on to rediscover, has now been posted online by others for free. It’s a very different world now. But before the Fat Lava exhibition and book, what did Roth, Kreutz, Scheurich and other names mean? What was the story? The same is true for Alla Moda – before that book and exhibition, how well known was Fratelli Fanciullacci, for example?!
This isn’t a self-congratulatory ‘boast post’, it’s a reflection of how information changes markets and values, how information is communicated today, and how quickly collectors accept facts as ‘always having been there’. Now, ten years on, Fat Lava is taken seriously, and is here to stay. Those that scoffed at Fat Lava in 2006 (and there were a fair few) have had to eat their words. The market is still vibrant and far from stale or passé. I’m excited to see how it develops and grows further over the next ten years. There’s still so much more to be uncovered and to learn – and to collect!

So where did the term ‘Fat Lava’ come from?
Neither Graham nor I invented it. Graham chose it as we had seen it being used a few times on eBay in Germany, where it was used to describe vases with thick lava glazes. German sellers had mis-translated words such as ‘dick‘, which literally translates as ‘thick‘, but can also be used to describe someone who is ‘fat‘. And so, Fat Lava was born…

A revised and enlarged fourth edition of the original Fat Lava bookalogue will be published in September 2016, priced at £20, with plenty of new information and extra images. Sign up to my newsletter at the bottom of the page to be notified.

Click below to view the short YouTube video that was produced at the exhibition, which itself has had over 103,000 views. YouTube had only been founded the year before the exhibition!

One thought on “A Decade of Fat Lava – 10th Anniversary”