The Portland vase is one of the most famous pieces of glass in the world, and is also amongst the oldest, finest and most celebrated. Made in ancient Rome around AD5-25, it can now be seen in the British Museum, having previously been in many prestigious collections. Collectors who owned it before 1810 include (in reverse order) British aristocrats, an ambassador, a dealer, Italian cardinals, Popes, and an Emperor. It was also famously lent to Josiah Wedgwood, who finally successfully copied it in his famous Jasperware ceramic in 1790, after four years of experimentation. 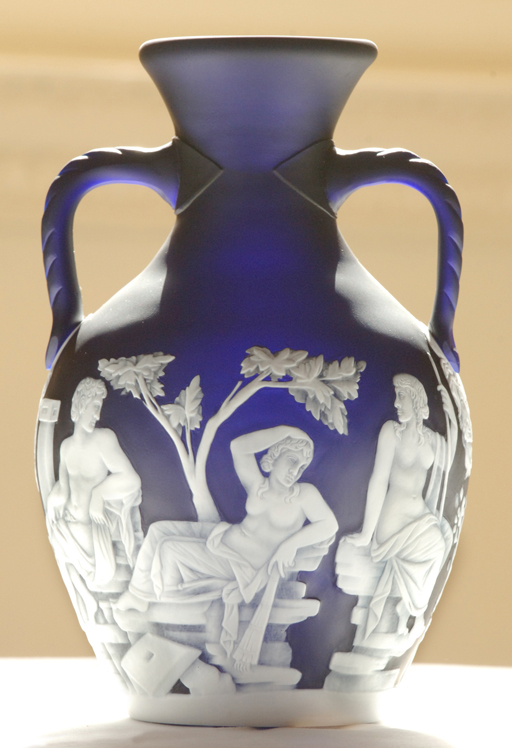 Reproductions or copies in glass are considerably scarcer due to a combination of the material and the complexity and difficulty of the casing and the cutting. It’s hard enough to make the blank successfully, let alone complete the cameo carving with the finesse and detail of the original. Only a handful of glassmasters have taken on the challenge and achieved it successfully since Roman times. These include Philip Pargeter and John Northwood, who completed their £1,000 prize-winning replica by 1876, Benjamin Richardson and Joseph Locke (completed by 1878), and Stephen Bradley in 1990.
To commemorate this year of celebration for Great Britain, it’s been achieved successfully once again in 2012. The two people who took up the challenge could not have been better equipped for it. The renowned glassmaker Richard Golding produced the body, and the delicate carving was completed by Terri Colledge. The project was instigated, managed and paid for by Ian Dury.
I was lucky enough to see the result of their skilled work at the National Glass Fair in Birmingham this weekend, and it really is both a marvel and a masterpiece. I’m familiar with the original as I’ve often popped into the British Museum during my lunch breaks when I’ve been at the Miller’s office.
I’m delighted to say that if you want to know more about it, a lavishly illustrated and beautifully produced book will tell you everything you need to know. ‘The 2012 Portland Vase Project: Recreation of  a Masterpiece‘, by noted Stourbridge historian Graham Fisher MBE, details the stories behind this latest recreation, the original, and the techniques behind them. I was delighted to meet Graham at the glass fair and thoroughly enjoyed reading his excellent book. To find out more, and order your copy, please click here.
If you’re interested in learning the full story behind the original Portland vase, I can also thoroughly recommend ‘The Mystery of The Portland Vase‘, by Robin Brooks, published by Duckworth in 2005. Please click here to order your copy. I read it first a few years ago, and revisited it earlier this year when I filmed a segment on the Portland vase at the Wedgwood factory for BBC2’s ‘Antiques Uncovered‘.