Me, Elvis Presley and Jonathan Harris? An unlikely combination, I hear you say. Well, I’d agree, it’s funny how seemingly disparate things can come together for some reason. But, quite often, when they do, amazing things happen. And that’s what happened here. 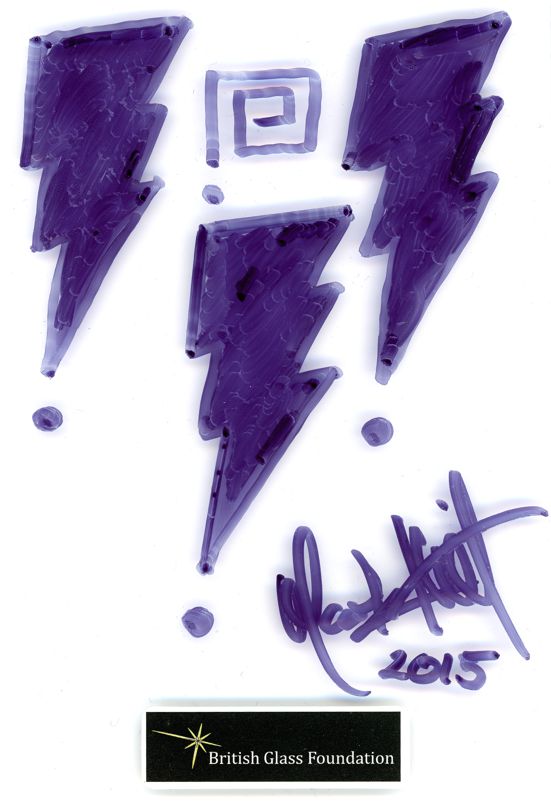 In this instance, it was The British Glass Foundation charity that brought us together. Earlier this year, they set a ‘Doodle Challenge’ and asked celebrities, well-known faces in the glass world and local schools to produce a doodle that would then be translated into glass by a crack team of some of the best glassmasters in the country. Doodles came in from actress Emma Thompson, singers and musicians Frankie Valli, Tony Hadley, Robert Plant and Beverley Knight, chef Raymond Blanc, much-loved and recently knighted comedian Sir Lenny Henry and others. Oh, and BBC Antiques Roadshow specialists and glass addicts Andy McConnell and me. 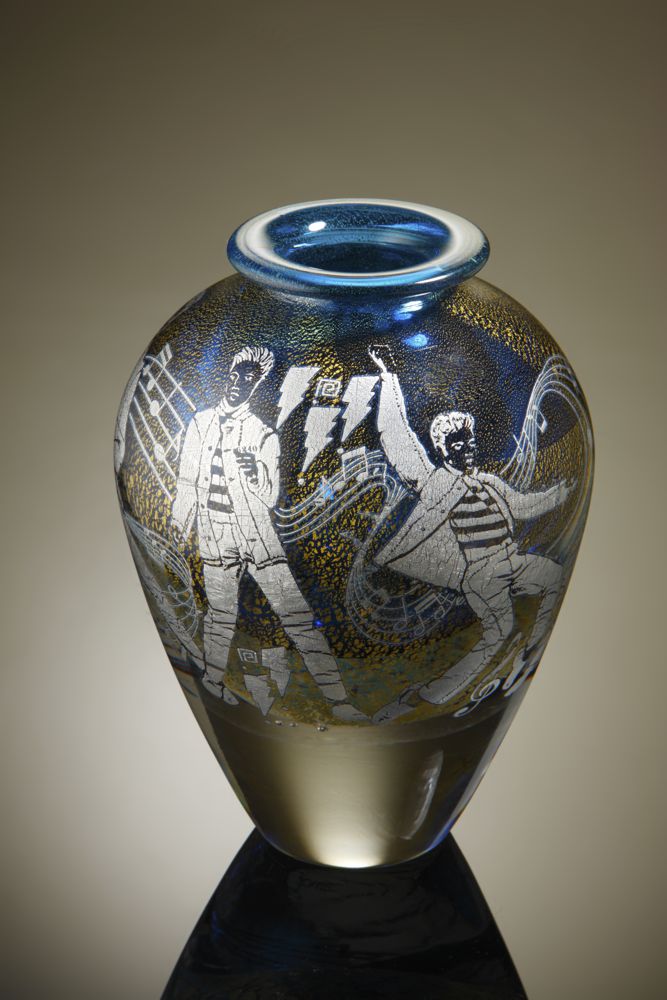 I was delighted when my doodle (left) went to my friend Jonathan Harris, the globally renowned and hugely talented and skilled cameo and graal glass artist. Looking back, he didn’t have much to work with, so it wasn’t a surprise when his wife and business partner Alison contacted me asking for more information. I told her that it was a proper doodle as, when I did it, I was doing some research into entertainment memorabilia and was flicking through an old Bonhams auction catalogue of an amazing collection of Elvis memorabilia. Much of it was consigned by the infamous ‘Memphis Mafia’ of his close friends and business associates, so it was top notch stuff including some of his jewel-encrusted jumpsuits and a white Rolls Royce. Somehow, one of his diamond ‘TCB’ lightning bolt pendants stuck in my head and ended up on paper. As well as wearing this motif himself, he gave items of jewellery, watches or other objects decorated with the lightning bolt to his close friends and supporters as a thank you and acknowledgement of their friendship. It was all related to his career and life – TCB stands for ‘Taking Care of Business’. 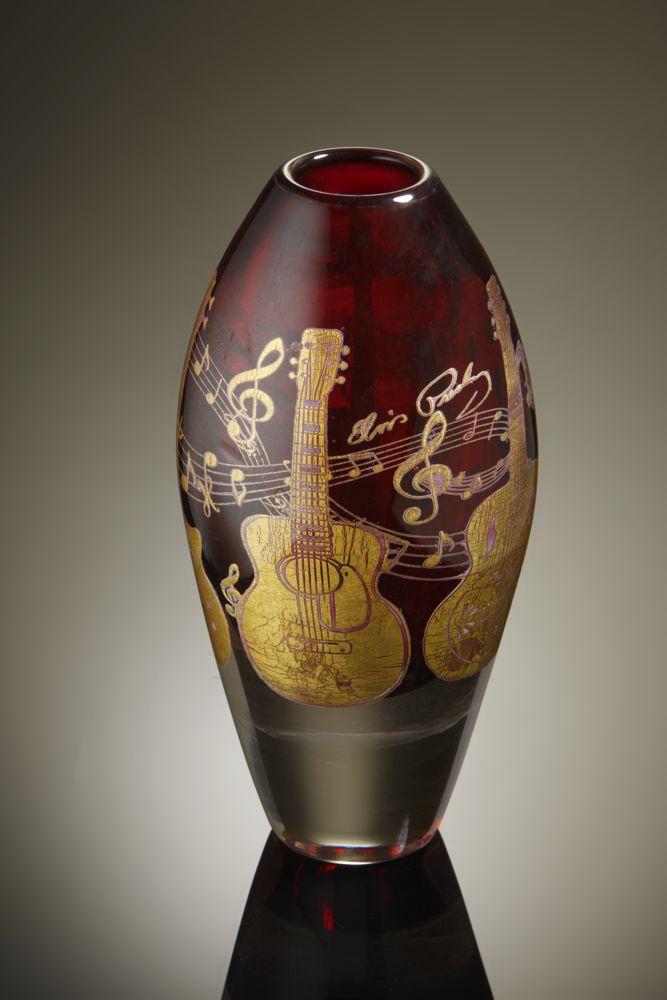 As for the dots and the partial Greek key, who knows? But a Dartington ‘Greek Key’ vase designed by Frank Thrower was also lurking around at the time. The problem was that the doodle ended up unfortunately looking a bit like something a Fascist flag designer may have devised, so I was glad to be able to explain to Alison where it all came from! I should have known they’d do an amazing job, but my jaw hit the floor when I realised quite how amazing.
Jonathan and Alison converted my random thoughts into three three-dimensional works of art on glass – the three highly complex and time-consuming re-heat cameo and graal vases shown here. Elvis dances lightfooted across swirling musical notes against a dramatic 24 carat gold leaf ground, and is himself picked out in contrasting silver leaf. You get a real feeling for movement and the fun of his music. I’m convinced that he’d have loved them, too, as he seemed to have appreciated a bit of bling! Uh-huh-huh! 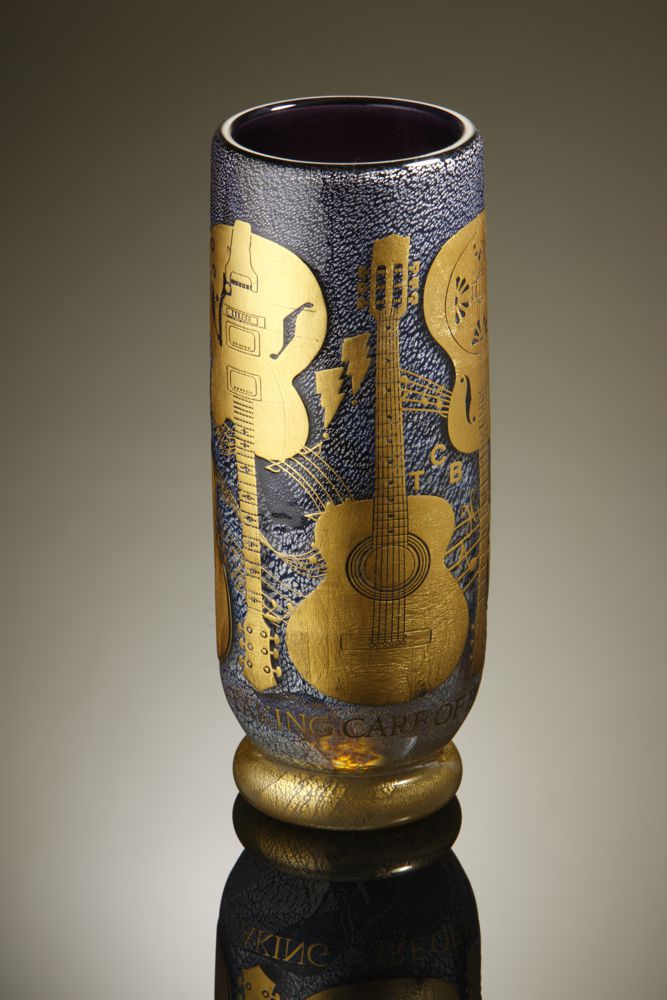 I like to think that Jonathan got carried away while listening to Elvis when working, as he designed two accompanying vases, with guitars over more swirling musical notes and bars, equally picked out richly in gold and silver leaf.
After spending many hours preparing each of the blanks, the final hot-working processes were completed at the 2015 British Glass Biennale, with Jonathan working with Allister Malcolm & Dan Ridgway at Allister’s studio in Broadfield House Glass Museum.
Of truly superb quality, they’ll appeal to Elvis fans, rock and pop fans, Jonathan’s legion of dedicated collectors and many, many more. Of course, they’re also unique, so there won’t be any more! There’ll only be only one chance to own them!
The vases are now going to be sold by auction at Fieldings on Saturday 24th October 2015 at 10am. It’s for a good cause as the proceeds from the sale of these, and the other works designed by celebrities, will go towards saving and developing Britain’s centuries old glass heritage. And the winning bids will actually make a real impact as The British Glass Foundation has recently raised over £2.1million from the European Regional Development Fund. So this is no small attempt – this is real. The funds will be used to rehouse the collections at the soon-to-close Broadfield House in a brand new, world-class visitor centre and museum at the White House Cone, Wordsley, that used to house Stuart Glass.
So bid now, and bid strong! I can’t emphasise enough the lavish and loving care, attention, days of work and great skills that went into designing and producing these works of glass art, and the true value of what will be done with the money raised from your successful bids.
The blue ovoid vase is lot 784, the red ovoid vase is lot 785 and the cylinder vase is lot 786, and you can see the sale and leave bids by clicking here. Considering the prices of Jonathan’s other work and the work that went into them, let alone the amount of gold and silver leaf used, the estimates are low, set at £600-800 each. Good luck!

The vases will be sold at Fielding’s Auctioneers’ ‘Decades of Design’ sale on Saturday 24th october 2015 at 10am. Images with thanks to Simon Bruntnell and Jonathan Harris Studio Glass, and taken by Simon Bruntnell of Northlight Photography.

Footnote: I started my career at Bonhams, working as a porter and then a junior cataloguer in the collectors department based in Lots Road, Chelsea. As well as being a steep learning curve, it was also immense fun and the knowledge and friends I built there have remained with me throughout my life and really set a firm ground for my future. I am, and have always been, very grateful for that. This ‘ultimate’ Elvis sale was particularly great fun to work on, and the lots were nothing less than sensational, with each one holding an incredible story! Not only did leafing through the catalogue help with my research, but it also brought back fond, and often hilarious, memories.