A few years ago, I bought a Minton majolica tile (above and below) at auction that, according to the handwritten labels on the back (see below), had a rather interesting provenance to the Great Exhibition of 1851. I wrote a blog post about it appealing for more information, which you can read by clicking here. 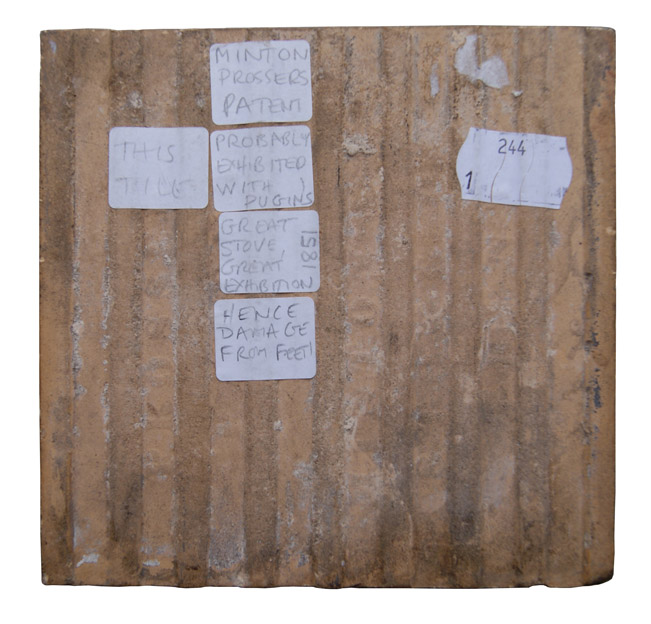 I had a few helpful responses shortly after but was delighted to hear very recently from Michael Spender, a tile collector and the Museum and Arts Manager at Poole Museum. He was the original owner of my tile and had researched it and the other, similar tiles he owned. He wrote about his discoveries in 2004 in Glazed Expressions, the magazine of TACS, the Tiles & Architectural Ceramics Society. Michael was kind enough to pass on scans of the article and here is what I learnt from reading his in-depth research.

Michael traced the source of the design of a stylised flower-head in an ogee arch to a row of tiles shown in an illustration (right) in the second volume of Owen Jones‘ The Alhambra. This influential book was published in 1845 and showed lavishly detailed and coloured Islamic designs from the famed building. This fitted perfectly with the ‘Prosser’s Patent’ moulded mark on the back of the tile, which was apparently used from 1840-45. It also implies that the design of the tile was either by, or at least inspired by, Owen Jones. 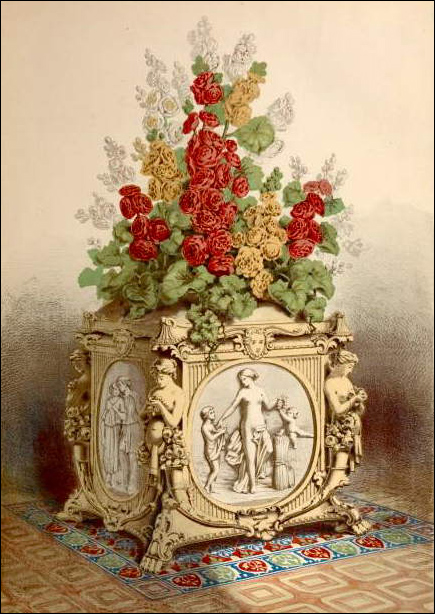 Knowing that Minton exhibited majolica wares including tiles at the Great Exhibition and seeing that this tile had similarities to the larger tiles used for Pugin’s notable ‘Great Stove’, he then looked at Matthew Digby Wyatt’s Industrial Arts of the Nineteenth Century. Incredibly, he came across a coloured illustration (right) showing, the limitations of period lithography allowing, tiles in the same design and colours. They formed a border around a tiled area upon which sat a huge terracotta flower vase designed by the sculptor Baron Carlo Marochetti. Bingo!
The raised outlines of the design created by the cuenca technique do show considerable wear (below), which was most likely caused by foot-wear when being used as a floor. This is backed up by the fact that the tile’s top edges were champfered before glazing meaning it could be grouted and fitted flush with tiles around it. Furthermore, other tiles of the same type and 5in. (12.5cm) size are known to have been used as floor tiles. 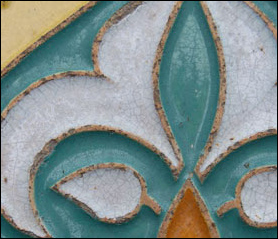 All of this adds together to create a pretty credible argument for the fact that my tile was one of those used at the Great Exhibition. But what about the dates? The Great Exhibition was six years later than when the tile may have been designed and possibly made. The answer is, it’s impossible to say. The tiles may either have been made in or shortly after 1845 and proved to be unsuccessful, so they were used later to show off the breadth of Minton’s techniques and inspirations at the Exhibition. Or else, they were only produced for the Exhibition to show off the same talents. Whatever, these cuenca tiles certainly weren’t as durable as those made other techniques used by Minton, such as engobe. It’s certainly rare enough for both reasons to be true – only a few of these tiles (some in other colours) are known today. 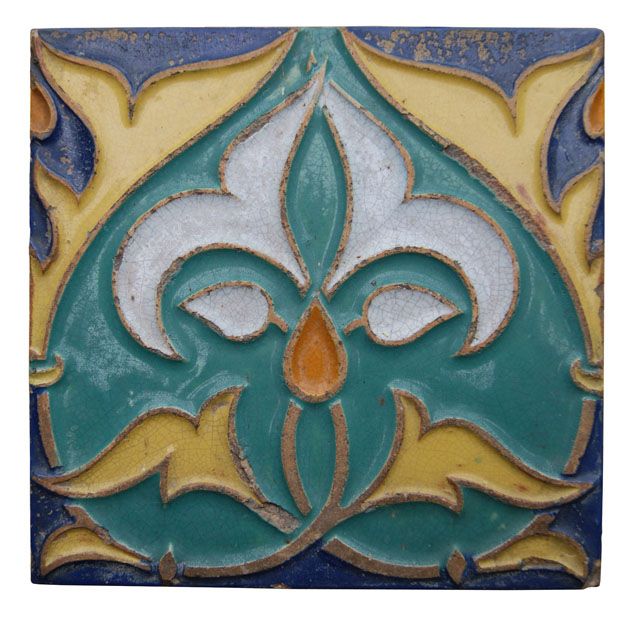 All in all, Michael’s superb in-depth research combined with what the tile itself tells us almost certainly proves that my tile was indeed part of the Great Exhibition. It may not have been used in Pugin’s Medieval Court or near his ‘Great Stove’, but it was there. I still don’t know who the designer was, but that doesn’t matter so much. I’m delighted to know more about its history and, for me, the magic is in and on the tile itself. Not only was it part of Hyde Park’s incredible Crystal Palace, but it shows the wear caused by the constant tread of the six million people who visited and gasped in amazement at the wonders within.

With thanks to Michael Spender and the Tiles & Architectural Ceramics Society.

For more information about Richard Prosser (1804-1854) and his patent tiles, please visit www.prossertheengineer.co.uk