As regular readers of my blog will know, I’m a huge fan of etchings and have bought them since I was schoolboy. I never spend much, I just buy what I like. The more bizarre or bonkers they are, the better.
I usually buy without knowing much or anything about the etching or the artist, and I enjoy the research challenge when I get home. Most end up being professionally mounted in secondhand frames I also acquire inexpensively. My two latest purchases are both unframed, and cost me £15 and £20 respectively.

The first (above) is reminiscent of a book illustration and is superbly quirky – it made me smile. It shows a line of finely dressed 17thC or 18thC ladies and gentlemen approaching a seated bearded dwarf in a hat. Behind him are two cats and a strange imp standing in a flower pot with his arms outstretched and a sun and moon above his hands. Above them is a partial face of an old bearded man, who I presume to be God or Old Father Time. The detail is executed quickly and, in places sketchily, but it’s good.

The etching is titled in reverse in the plate ‘bemoste dwerg ontvangt zittend zijn gastern‘ (The mossy dwarf receives his guests seated), which nearly matches the pencil inscription below the plate mark, which reads ‘Bemoste dwerg ontvangt zittend zijn bezoek   mei 75   e.a.   Pom. Hoogstadt   9/9‘. The etcher’s signature may read Hoogstaat or even something different – it’s tiny. I presume that the other information relates to the facts that it’s print 9 from a limited edition of 9, an artist’s proof (or épreuve artiste) which is unusual for the final edition number, and that it may date from May 1875, which would make it early for a limited edition print, especially in such a small edition size. The type of paper and state and discolouration (below) seem right for the late 19thC, however, despite me initially thinking that it dates from the etching boom of the first two decades of the 20thC. 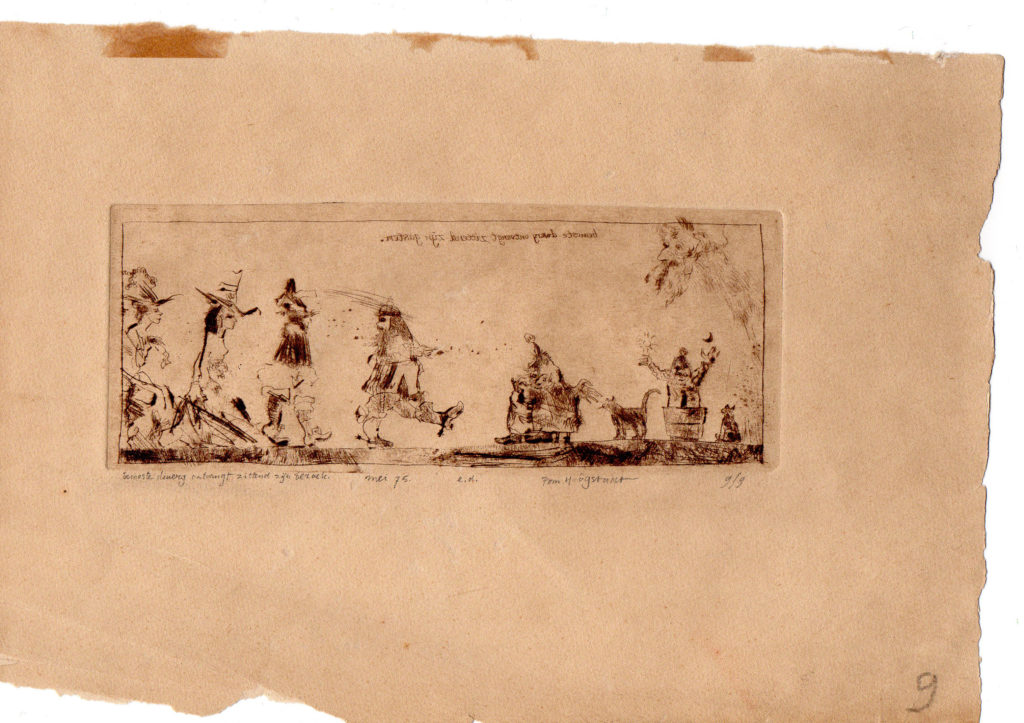 So, lots of questions…and no answers! Despite searching under any combination of information in different languages, I can find nothing about either the artist or the subject. I even asked a cultured Dutch friend and the only thing he could tell me was that ‘bemoste’ (mossy) is an Old Dutch word that isn’t used any more, perhaps not surprisingly! I can only presume that it’s a minor scene from a fairy tale or a book that has faded into obscurity over time.
I had more luck researching the second etching, which is somewhat more dark and grim in appearance, partly due to the use of the drypoint technique. Despite it looking initially like soliders marching on, I think the three men are travelling musicians, as indicated by the lute and the bugle. It shows shades of both Honoré Daumier and Gustave Doré in my eyes – both appealing features. It’s signed ‘Coussens‘ and is numbered 26 from a limited edition of 100. A little bit of research showed that it was by Armand Coussens (1881-1935). Born in Saint-Ambroix, he studied under Alexis Lahaye (1850-1914) at the École des Beaux-Arts in Nîmes before being encouraged by Lahaye to study at the prestigious École des Beaux Arts in Paris in 1900. He found the atmosphere there dull and staid, but remained working in Paris for seven years including taking on commissions from Le Rire, Le Cri de Paris and other periodicals. He then returned to Nîmes, where he became professor of drawing at the École des Beaux-Arts in 1908. 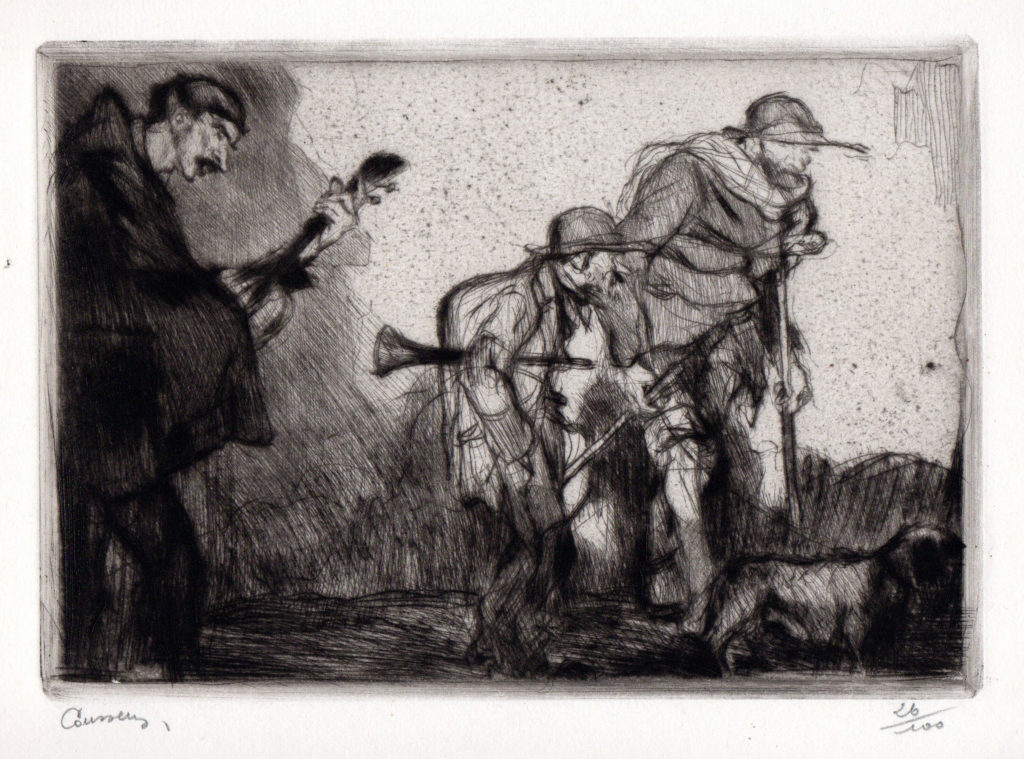 He produced his first etching in 1912, and had his first major commercial success two years later when he sold a plate to a prolific print dealer. He became recognised and, in 1919, the Musée du Luxembourg acquired eight etchings and one painting from him. His etchings were subsequently shown as far and wide as New York, London and Tokyo. He focused on landscapes, town and country life and local people, and he also became talented at producing coloured etchings, which were then regarded as a lesser art form than pure etching. In all, he produced 208 different etchings, some of which are very rare. Mine seems neither common nor rare, and has fetched up to around £100 in the past.
In tragic, yet somehow poetic, circumstances, Coussens died aged 54 from breathing in too many fumes from the nitric acid used to bite his etching plates. In that way, he literally died for his art – or else his art killed him.