As well as being relaxing, the two weeks I spent in Mexico for our Summer holiday this year were most revealing. I had never really considered Mexican design before and, although I had seen Mexican folk art, I hadn’t considered it properly. These two weeks gave ample opportunities, from visiting museums to wandering the streets of Merida aimlessly for a day just to see what life there was like and what I encountered. What I did encounter was sizzingly sensational – a rainbow of vibrant colours, a mixing of motifs from religion, life and death, and enormously invigorating vivacity. The long-established epicentre of much of this is the annual ‘Day of the Dead’ celebration held in early November. 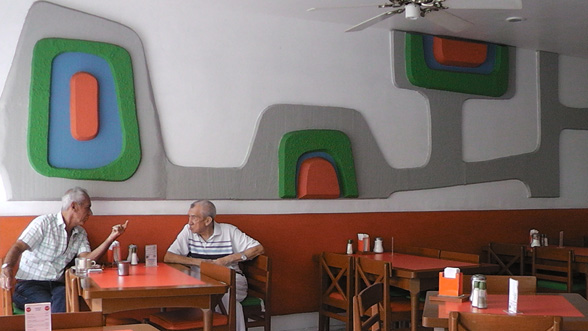 It now seems that I’m not the only person to have had this revelation. To commemorate this year’s event, the FT had a double page spread about contemporary and modern Mexican design, and the popularity of traditional and modern folk art. Uber-dealer Mallett of London have also recently held an exhibition dedicated to Mexican design. Apart from the wonderful original 1960s interior of Café Pop (above), the modern and contemporary design side wasn’t something I was able to experience much of. But I did manage to indulge myself in a little folk art. 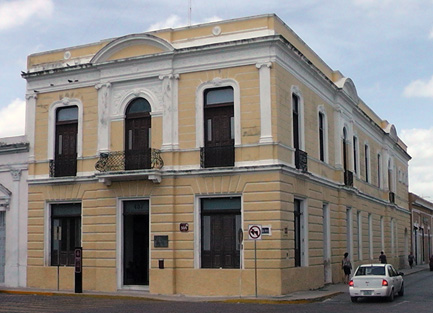 One particular highlight for me was the Museo de Arte Popular (left) in Merida, the capital of Yucatan. The banker had to work (by the pool) one particularly hot afternoon, so I took myself off to visit this recently refurbished mansion a good 15 minutes walk away from the city centre. The place was air-conditioned and deserted, so a veritable oasis. Items in the collection generally date from the 1980s onwards, but many are more modern and seem to have been assembled from donations from the artist, collectors, or acquired by corporate sponsors. 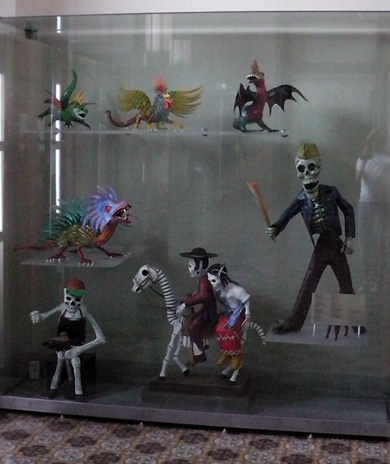 Organised by type of item, everything is displayed in beautiful customised glass cabinets allowing all sides to be seen. This is particularly important with Mexican folk art, which is typically vibrantly coloured and decorated all over. Their carved wooden sculptures, known as Alebrije and usually from Oaxaca, are typical of this, but ‘Tree of Life’ sculptures and many ceramics can be similar. The photograph here doesn’t do justice to assault on the senses that much of the collection represents. The collection of animals is wonderful, and the minimal signs give just enough information without telling you what to think. I picked up a number of names and regions here – thankfully, most of both are still active today. My only regret was that there wasn’t an illustrated book or pamphlet to take away with me. 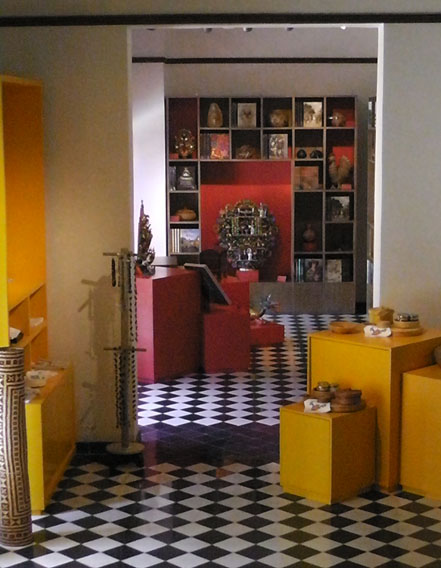 But that regret didn’t last long. As I wondered back into the city centre, I passed through the main square and stumbled across a truly amazing shop, the Casa de Cultura Banamex in Museo Casa Montejo (left), selling contemporary folk art. At the back of a museum containing a fine and grand 19thC Mexican house, it seemed to be sponsored by Banamex, the national bank. Even more amazing than the selection of items on stock, many by names I had seen in the museum only a few hours before, were the prices. As you can see, it is a very smart place, so I expected prices to be high, but it was quite the reverse – very few things were over a few hundred pounds, and the majority were priced from £30-150. 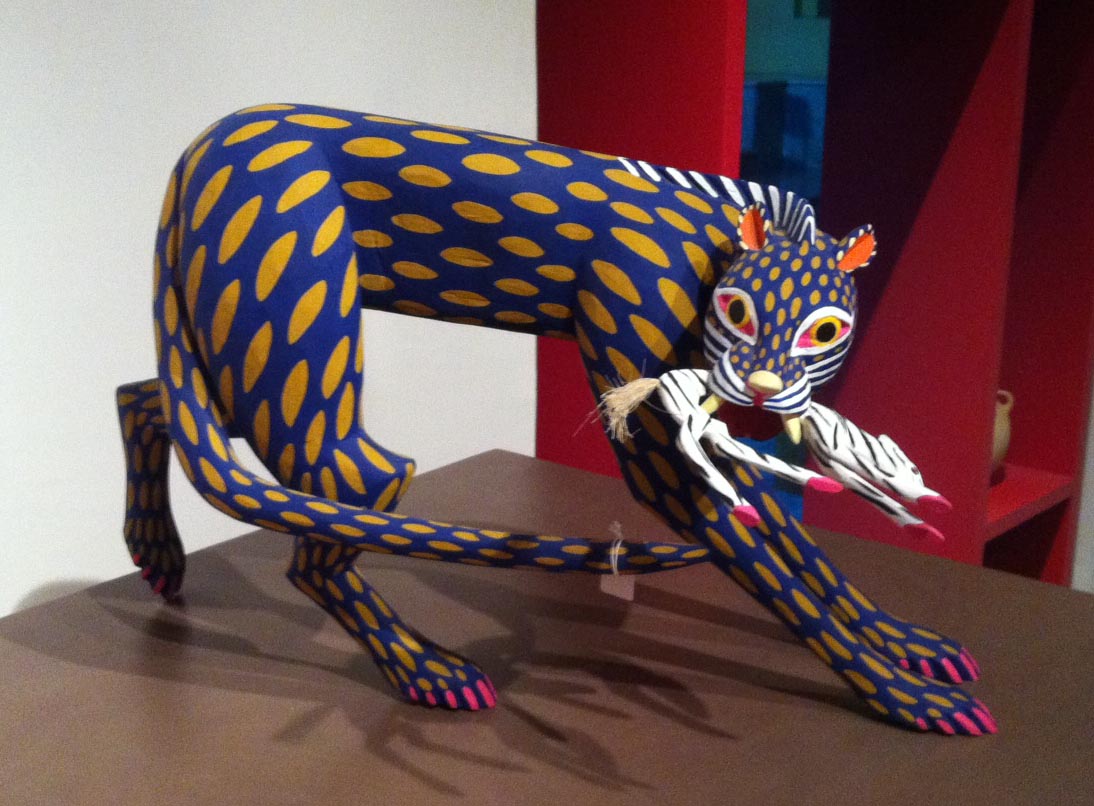 By this point, the banker had finished his work and rejoined me. My discovery was much appreciated, as the banker’s penchant for carved and painted wooden Mexican sculpture was one of the reasons for us being here in the first place.
Thankfully we had rented a car which was small enough to be affordable, but large enough to have space for a sizeable sculpture. So the banker spent, or ‘invested’ as we prefer to call it, 5,400 Mexican pesos, or £260. The result was this typically vibrantly painted carnivorous beast (above), which is related to a Mexican myth or legend. At nearly over two feet (63cm) long, it’s not exactly small, and it’s by Angelico and Isais Jimenez. Largely unknown outside Mexico (at the moment, anyway), they’re the sons of Manuel Jimenez (1909-2005), the founder of the entire Oaxaca school of Mexican carved and painted animals. They might not be to your tastes, but they are to ours, and the importance of the makers is key. After getting over the surprise that we really wanted to buy it, the shop staff were enormously helpful in packing it safely for the flight home, and found a sturdy box, acres of bubblewrap and piles of styrofoam chips. 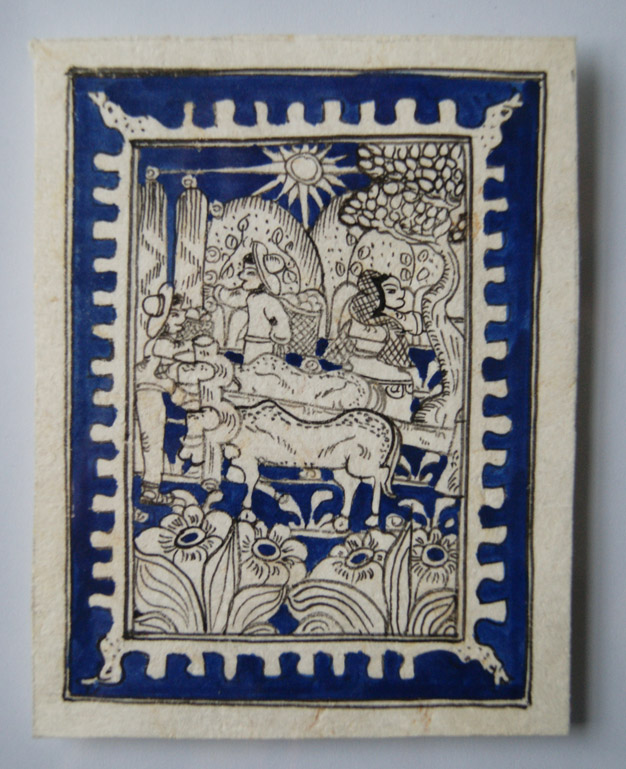 I couldn’t resist a little something either, especially after my visit to the museum earlier that day. But I had a much more limited budget, particularly after adding a few things to my collection in the antiques markets in Mexico City (read about those here and here). So I decided on a traditional Mexican amate paper card (left), handpainted by Juventino Diaz Celis (b.1977). A painter on amate paper since he was 13, he has won numerous prestigious awards including a Grand Prize of the National Folk Art Prize, has executed public commissions, and was included in the ‘Great Masters of Mexican Folk Art’ book. Handily, it also came framed and glazed, and the framing was perfect – for once. At 5in (12.5cm) high, it’s small, but I got all that for 205 Mexican pesos, so about  £9.80. Enough said. 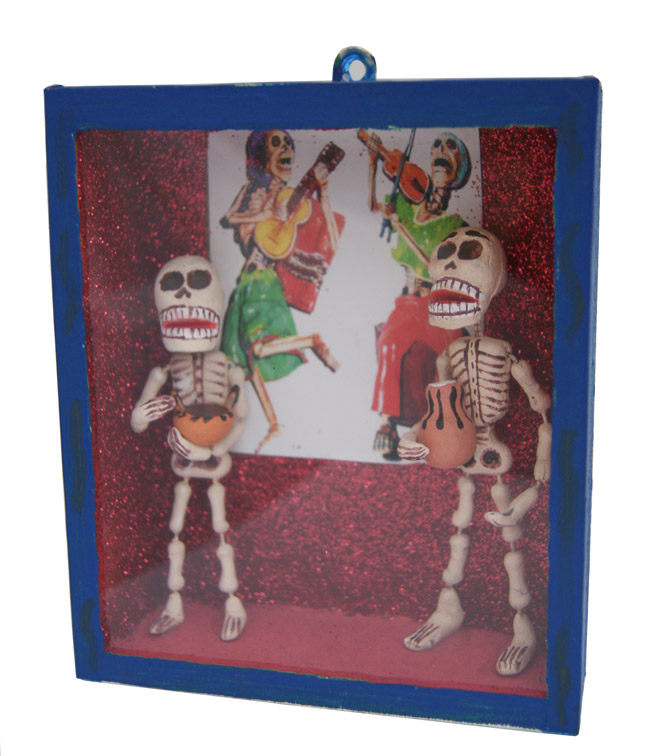 On the way to dinner that evening, we stumbled across another folk art treasure trove. As its name suggests, Miniaturas (on Calle 59) sells a vast range of miniature folk art pieces. The variety, quantity, range of colours and amount of glitter is enough to make your eyes water! After mulling over the options, laughing at some of them, and lusting after others, I plumped for this suitably Mexican and amusing boxed ‘diorama’. Yes, it’s cheap and tacky, but it’s eye-catching, representative and fun!
It appealed to me as the skeletons in the front and on the printed paper on the background are very Mexican, as are the colours and use of glitter. I also found it amusing as it spoke to me about collecting – is this what happens to us collectors after death, clutching our beloved pots as we march towards the Underworld?! Perhaps not, as I doubt the Underworld is made of ruby red glitter.
In other, lighter news, here are two very gratuitous pictures of me on ancient Mayan ruins as this is my penultimate post on our Mexican adventures. The photograph below is of me standing on top of Structure IV (I think) at Calakmul, which was a revelation and well worth the three days to get into the deepest jungle near Guatemala, visit it, and get back. 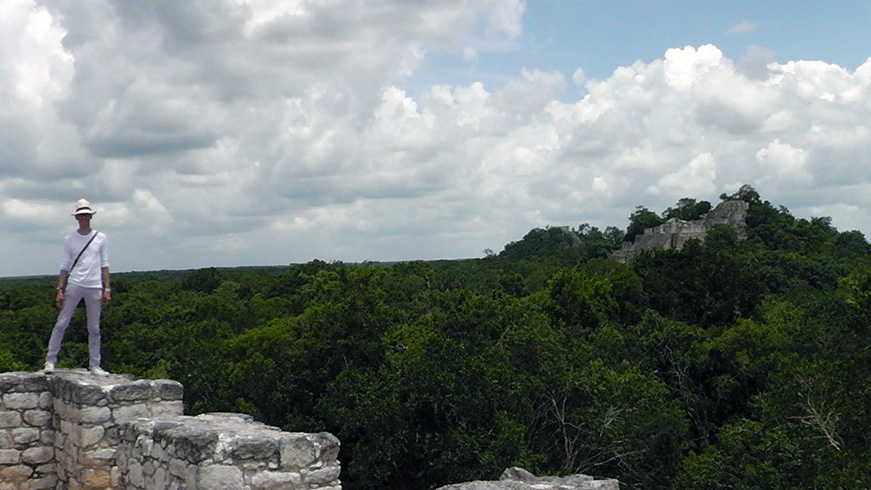 Perhaps only another four or five people made the journey, so we saw virtually nobody else for our entire visit. Apart from some giant tarantulas (not good) and some curious monkeys (very good).
The photograph below is of me on top of some ruins at Becan, which was another revelation, but in a very different genre to Calakmul. 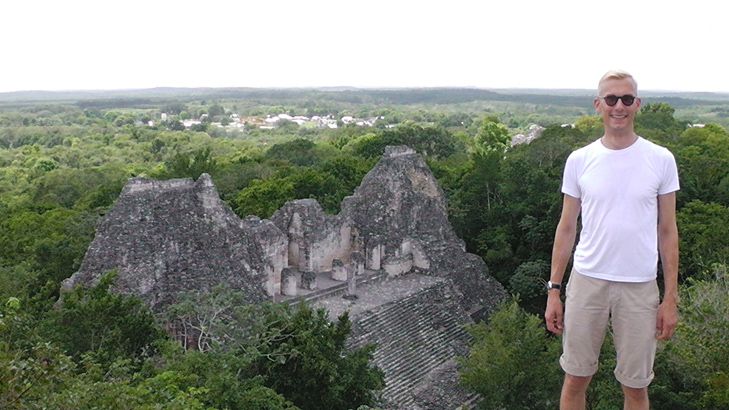 If you’re looking for good food in Merida, we can certainly recommend Trotters. No visit to Merida would be complete without visiting the Regional Museum of History & Ethnology on the Paseo de Montejo, and the nearby Casa Monte Molina museum, a grand private house built around 1900 that’s still owned by the same family but open to the public. Don’t forget to check out the Tiffany windows!
Finally, if you’re planning on making the journey to visit Calakmul, a stay at Rio Bec Dreams, owned and run by the unique and kind Diane & Rick, is a must. You’ll have such fun, and they’re only 45 minutes drive away from the historic site and can organise tours if you don’t have a car.