This has nothing to do with animals, obviously. Vetting is the process that occurs the day before certain, usually higher end, art and antiques fairs open. Teams of independent experts grouped by discipline (silver, glass, jewellery etc) move around the fair looking at every object in the fair in their category, closely examining any they feel the need to. Some are dealers at the fair, but most are not and travel in for the day. The point is to ensure that everything for sale is exactly what it is described as being – authenticity, condition, attributions and date must all be correct. Price isn’t included in vetting. That’s down to the dealer selling the item. A vetter may have an opinion, and/or experience, which they may voice to the dealer if they feel it’s appropriate, but generally a vetter is encouraged to keep their opinion on price to themselves. At some fairs I’ve vetted, thoughts on price are offered where a vetter feels that the object is under-priced in the market. Helpful stuff – as is when when a dealer can ask a vetting committee of experts for help identifying and pricing an object they acquired but know little or nothing about. The vetting committees I have been lucky to work with have always tried to help wherever possible – myself included. 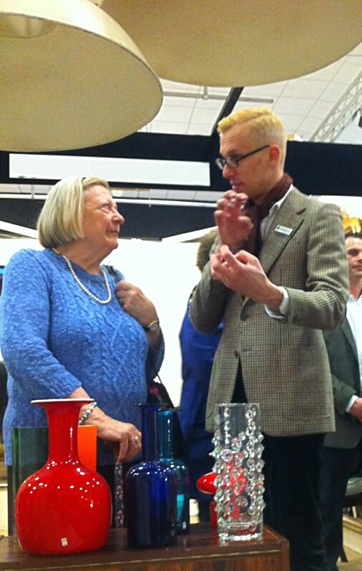 If an item is not as described for whatever reason, a note is left or – preferably – a short discussion is had with the dealer. Their side of the story and opinions are listened to and taken into account, along with any supporting documentation. A decision is reached. Labels may be modified to show restoration, or a date or attribution corrected. If there is a serious issue which cannot be resolved, the dealer is asked to remove the object from their stand and withdraw it from sale. Although that dealer is an expert in their field, it may just be that a vetter knows more about that particular object than they do.

At its worst, this part of the process can be very difficult and fraught with stress and emotion, particularly, as regular fair-going dealers will know, after a long and stressful set-up period or when the fair is expensive to stand at. The dealer spent their own money on buying the object and saw a profit in it, so believes in to that extent. It’s the main reason why many dealers dread vetting – opinion vs opinion and the possibility of being forced to withdraw objects from sale and take a hit on potential profits. No dealer, or vetter for that matter, knows everything – we’re all always learning in this industry and we all make mistakes. It’s part of the reason why vetting happens in teams – to combine experiences and expertise. It also helps to have more than one expert’s opinion when an object is deemed ‘not fairworthy‘, ie; something mass-produced and/or of poor quality, and/or that does not fit the (typically high) profile of the fair.

From the vetter’s side, this negative aspect is also often very difficult. Great tact, politeness and discretion, balanced with firmness, a lack of bias and a disregard of any personal opinions about any dealer, are required. Then one must have the ability to keep any and all discussions totally and completely private. No gossiping about it after – not even a whisper with someone outside of the vetting committee. Despite what some dealers may think, vetters do want the dealers and the fair to do as well as possible. It’s never a pleasant experience asking for something to be removed.

When I started professionally in this business 19 years ago, I was in awe of vetters – these all-powerful ‘super-experts’, these gods of authenticity, with their almost mystical powers built up over decades of experience and handling many hundreds or thousands of objects. In my eyes, along with Antiques Roadshow experts, they were at the top of their field, so they must be paid accordingly for their work. Not just for their expertise, but also for the energy and time vetting takes.

I was honoured and (honestly) taken aback a few years ago when I was asked to join the vetting committees of a couple of major fairs. I was absolutely delighted. However, it was somewhat of a surprise when I realised that vetters don’t really get paid. Travel to and from the event is covered, usually taking at least a month or two to be reimbursed, and sometimes one is offered a nominal fee (say £60 or so), or lunch in the fair’s restaurant. But that’s it. It’s somewhat like a birthday gift from a distant maiden aunt – a fiver in a card or a pair of socks – the kind gesture is there and ‘it’ is useful. But fair organisers aren’t family, these gestures aren’t anywhere near a fair daily fee for the time and effort spent, or certainly ‘invested’ in getting to that position. In other spheres of business, say the law, politics or city finance, anyone asked to do a similar task would surely laugh in the face of the equivalents of fair organisers, “Use my expertise, put my name to it and spend most of a day, or more, doing it?” No. Thank you. “You’re not a charity and nor am I.” In fact, it’s quite the opposite – fair organisers are businesses who pay others for their work and vetters are professionals who derive income from their expertise and experience. 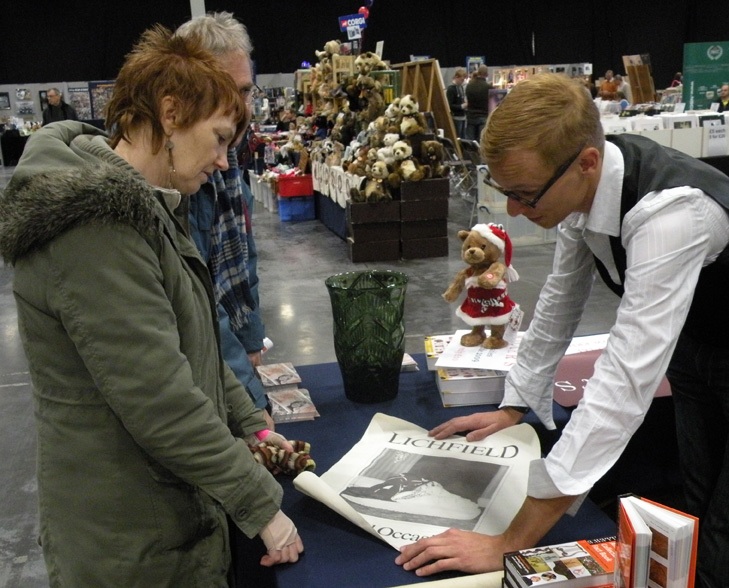 So why do it? Firstly, there is the honour and what inclusion on a vetting committee says about your expertise and people skills. It’s ‘profile’ and almost a form of stealth bragging, I guess. There’s always that surge of excitement as you walk in to a nearly set up fair before it’s open to everyone else. There’s the chance to strike an early deal if you spot something you like, for yourself or for your stock, but that is fraught with difficulty. Is it ethically correct for a vetter to buy something before a fair opens? Is one really disclosing everything one should about the piece? My preference is to express an interest, divine a price and then return when the fair is open – how early depending on how keen I am to own the object.

Perhaps most importantly, there’s the chance to learn from fellow vetters and the dealers present – handling objects you may not otherwise be able to, and listening in or being shown. Always the best way of learning!

Chatting to dealers also offers a view on the state of the market – what is hot and what is not. Who’s doing well, and who’s not. We all know that the market has moved strongly towards modern, and even contemporary, objects over the past decades. Previously limiting datelines have rightly been extended or dropped entirely – well, from most fairs… And then there are decorative antiques, but that’s an entire other story. We’d all rather see someone walk out of an antiques fair with a smile on their face and a bag in their hand, even if the object in it dates from the the 1970s or 80s. Providing it’s correctly described and fairworthy, of course.

Then there’s the bonhomie of colleagues and peers, the gossip and catching up – as we all know, the personalities and social side of our business are amongst the most enjoyable aspects.

Finally, there’s giving back, which is often the subject of sometimes near holier-than-thou pre-vetting talks. Throughout our careers, we’ve been lucky enough to learn and develop from things we have been told or shown. The industry has also been helped by vetted fairs that ensure continued public trust in antiques. Also, antiques have provided an income, career and passion to each of us. Vetting is our opportunity to give back. Balance the karma, and feel good in doing it. That’s payment enough…

Surely, for fair organisers, one important worry is the future. I’m lucky to work with a great vetting committee (of which I am certainly the junior member), but I think it fair to say their age is commensurate with their experience. Retirement will beckon one day – and possibly very soon for some. Who will replace them? From an expertise side, there must be candidates amongst younger generations, but will they be prepared or have the time to do it – in some instances for nothing or tantamount to nothing? The world of work that they grew up in is very different to the one the current crop of vetters experienced. Let’s hope that the honour of the role and the selfless sense of sharing expertise has been instilled in them firmly. 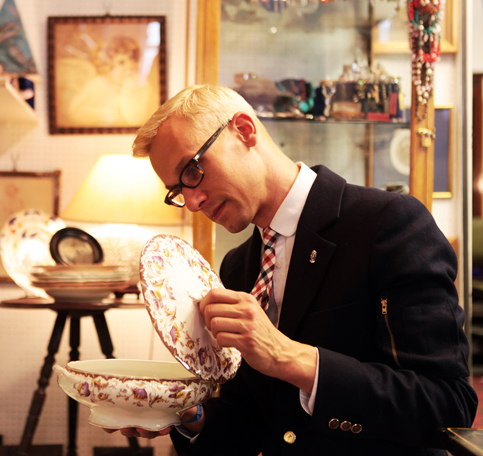 There’s also an argument that some people cannot be replaced – that much critical expertise will leave when the vetter does. Is it time for vetting to be more organised and for senior, experienced vetters to pass their knowledge on to specially selected ‘junior vetters’ with the capability to learn, absorb and apply in a fair manner?  If so, this initiative should surely come from the fair organisers themselves, and they’d probably have to work together on this. This could be a more formal version of the recent mentoring programme organised by my colleagues and I for Antiques Young Guns, where senior members of the trade (dubbed the Antiques Heavy Artillery) mentored and passed on some of their knowledge and experience to selected Young Guns for a few days.

If vetting then becomes more formally organised, should vetters get, or even demand, proper payment for their work, time and expertise? But, with profits squeezed on all fronts, can fair organisers afford to pay such fees for some 50-100+ vetters? How do fees work for those who have more or less vetting work to do than others, depending on the quantity of that category of stock at that fair?

There’s no doubt that an independently vetted fair is highly appealing and reassuring to the buying public – especially in these days of dealers often being (wrongly and rudely) depicted on TV as fly-by-night chancers only on the look out for a quick buck. You know you won’t be sold a pup, and it’s much safer than the caveat emptor of the increasingly pervasive auction houses. Of course, dealers selling at fairs staged by major national or international organisations (such as BADA and LAPADA) must offer solid guarantees of authenticity to be a member of that organisation and sell at that fair – but independent vetting strengthens that guarantee many times over and is more reassuring to the public and easier to demonstrate. As a buyer, do you feel more comfortable buying at an independently vetted fair?

How do I feel about vetting? I honestly don’t know the answer to that one. I’m a newbie but, after vetting a number of fairs over the past few years, I’ve found myself in a position, like all self-employed professionals, where time is money and money must come in return for services rendered. Vetting doesn’t offer that return. Ask my partner and he’ll tell you that I usually (but not always) return from vetting in a poor or low mood. Somehow upset. I have to actively remind myself about the best bits – seeing people and objects I love and enjoy spending time around and learning about. I find the various rules that differ between organisers (especially over datelines) confusing and often annoying. Disagreements are uncomfortable by their very nature and, more often than I’d like, unsatisfactorily unresolved in my mind for whatever reason. To be honest, it’s become almost an onerous task. I really am still honoured (and grateful) to be asked, and I know it’s an important process that absolutely must happen. But I don’t know whether I want to continue under the current state of affairs and I wonder how many others feel the same, or will feel the same? Right now, the system works and rolls on – but for how long?