As I was typing this post about this range, I realised what an appropriate time of year it was to be doing so considering the name of the range! Regular readers of my blog or Twitter account will know that I believe that much Victorian glass is both under-rated and under-valued for what it is. Yes, there’s a lot of horrible, mass-produced rubbish out there, but there’s also a large quantity of high quality, uniquely designed glassware that was often very complex to make. Despite the amount of work and Victorian ingenuity that went into it, it’s cheap to buy today purely because it’s out of fashion.
Putting my money where my mouth was late last year, I bought a vase which I consider to be typical of this. I know it’s not to everyone’s tastes, but it would have been the height of fashion in the late Victorian period. And just think about how many highly skilled steps it took to make it! The thinly blown pink core was covered with opaque cream glass, the legs were coloured, applied and curled on, the acanthus leaves were made, coloured with two colours of enamel chips, applied and crimped, and the rim was trailed on in peaks. It’s the glass equivalent of a master patissier’s favourite fondant fancy!
Made and fashionable over 120 years ago, and measuring 7.25in (18.5cm) high, it cost me £45 including postage and packing on eBay. It’s probably worth up to twice that, but that still isn’t enough in my opinion.
A little bit of research showed that it was made during the 1880s, and from a range commonly known as ‘Autumnal’. However, it wasn’t at all clear who had made it, as a number of companies produced similar pieces including the Stourbridge greats of Walsh Walsh, Stuart, and Richardsons.
At a Glass Association committee meeting, I asked for some help and was advised to contact Mervyn Gulliver, an expert on 19thC glass and author of the book Victorian Decorative Glass: British Designs 1850-1914, published by Schiffer in 2002. His detailed response (abridged here) was most enlightening!
He told me that the cream over pink colours and design of the leaves on my vase match those found in a range called Autumnal Ware that was advertised by the London retailers Blumberg & Company in The Pottery Gazette on 1st May 1884. Walsh Walsh also advertised an Autumnal Ware range in different edition of The Pottery Gazette in the same year. They also produced and advertised a range called Ivory Ware that was also advertised by Blumberg, so there seemed to have been a close link between the two companies at the time.
He then very kindly went through his archive of drawings from the surviving pattern books of Stuart & Sons Ltd., H.G.Richardson, Thomas Webb & Sons Ltd, and Stevens & Williams Ltd, but wasn’t able to find a match for my vase. The Victorian Walsh Walsh pattern books haven’t survived so we can’t see if my shape is in them, but Eric Reynolds (author of The Glass Of John Walsh Walsh, published by Richard Dennis), believes that the close proximities in date and the clear link between Walsh Walsh and Blumberg indicate that the Autumnal Ware range – of which my vase is an example – was most probably made by Walsh Walsh.
Having said it’s the right time of year to be writing about this vase, it also strikes me that Spring would do too – there’s something very ‘Easter Egg’ about it! I know it’s not to everyone’s taste, but I love its Victorian Kitsch appeal and how it illustrates Victorian invention, industry and ingenuity. And now I know who (probably) made it and when too! 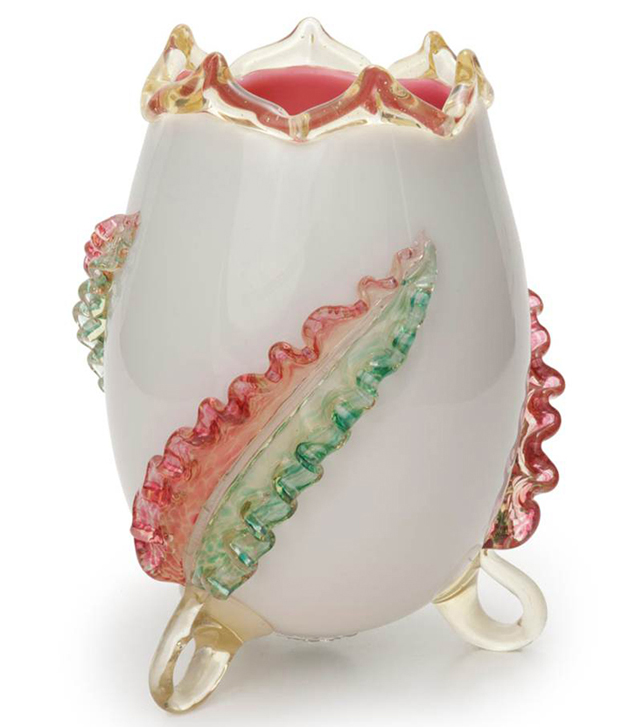