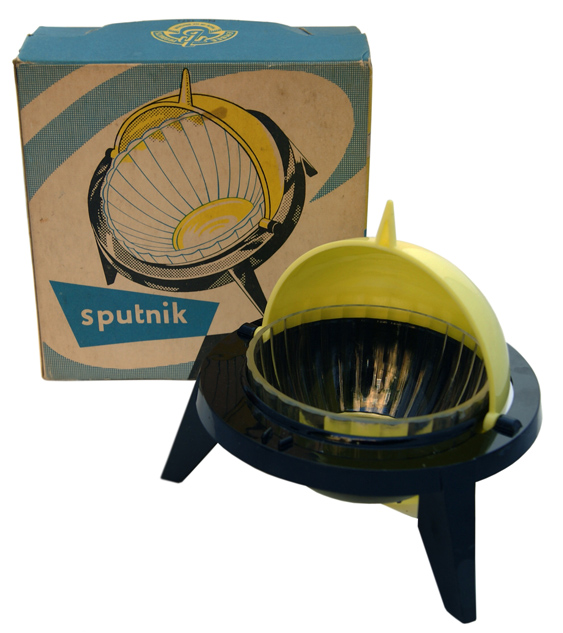 Regular readers of my blog will know that, every now and again, something catches my eye and mind and I simply have to have it, regardless of whether I collect it or not. The last one was the intriguing ‘Internet Radio‘ and this time I got snared by a jam pot. But a jam pot with a difference! A jam pot inspired by a spacecraft!
My dear friend Beth Adams, a super dealer at the marvellous Alfie’s Antiques Market in London had spotted this amongst the things an older lady had brought in to sell. Knowing my love for all things Bakelite and plastic, Beth thought it would be right up my street – and she’d never seen the box before.
I

t’s a plastic jam dish inspired by the shape of the Sputnik satellite. The plastic is probably the rather unfortunately named urea formaldehyde judging from the feel and light weight, which doesn’t sound like something you’d want to put near jam! However, it was safe, economical to produce and was one of the most commonly plastics after World War Two. And, indeed, the fact it was plastic was what attracted the lady owner to buy it back in late 1957, and she’d kept it carefully ever since. When Beth showed her surprise at seeing the box, especially in such good condition, the lady exclaimed “Yes! Of course I looked after it – it’s plastic and it cost a shilling!” As if plastic was some exciting or luxurious new material…which of course it was in many ways.
I

t was made by a company called Embee Products, based in England. We don’t know too much about them, but they produced a range of tableware from the 1950s-60s from salt and pepper shakers and napkin rings printed with polka dots, to ice buckets and egg cups in fashionable pastel colours of the day. The Sputnik Jam Dish seems to be their most avant garde design was also produced in other colours such as red and blue, and printed with polka dots. I love the side of the box (above) which focuses on two other themes typical of the 1950s, convenience and cleaniness, as it “closes at a touch“. 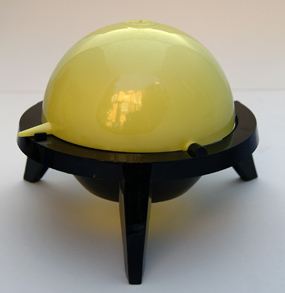 The shape allows us to date it to somewhere around late 1957 to 1958 as Sputnik, the first artificial satellite, was launched into orbit by the Russians on October 4th, 1957. The excitement this drew from across the world led to the now familiar ‘ball with legs’ motif being used for everything from motifs on wallpaper to magazine covers to, well, err, jam dishes.
I find this choice of object particularly interesting too. Nobody would think of decanting jam into a dish now but it was almost de rigeur from the 1910s-50s. Don your rose-tinted spectacles and imagine tea and scones in the rose garden with the vicar. But what a choice of shape! Chintz ceramics I can understand, but apart from to take commercial advantage of the world event of the day, who’d have put a jam dish in the shape of a spacecraft? it’s ‘traditional meets modern’, a dichotomy typical of the 1950s when the styles and traditions of the 1930s and before were still strong, but a new modernity of technology, science and outer space was zooming towards us.
And the price for this little bit of history? Well, our lady vendor clearly didn’t like jam as it was never used, so I paid £15. But forget the money, the story it tells is worth far more.